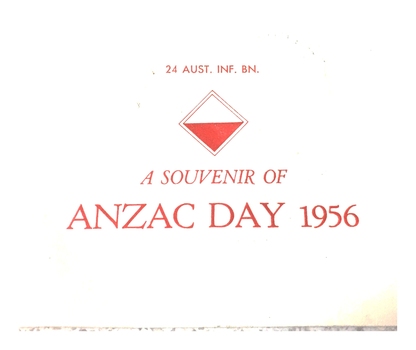 Menu for Dinner and commemoration of Anzac Day in 1956, by the 24th Infantry Battalion. 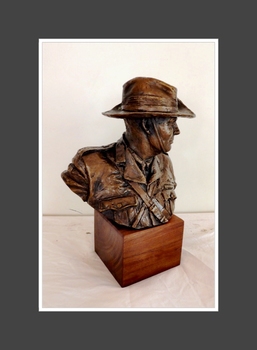 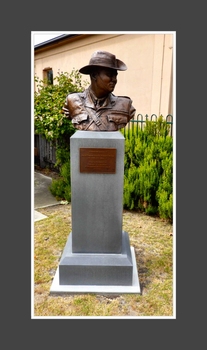 Bronze plague with following inscription: In Honour and Memory of Major General Harold 'Pompey' Elliott CB,CMG,DSO,DCM,VD Founding President of the Camberwell City Sub Branch of the Returned and Service League of Australia 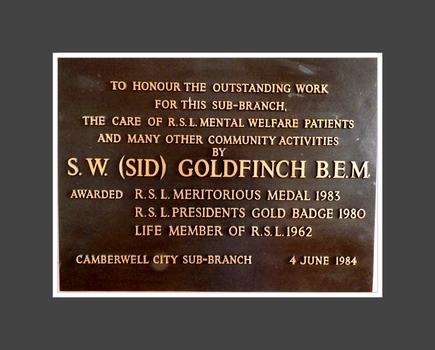 See attached photo. Service memorial for 21 years of service as the Hon. Secretary of the Camberwell City RSL 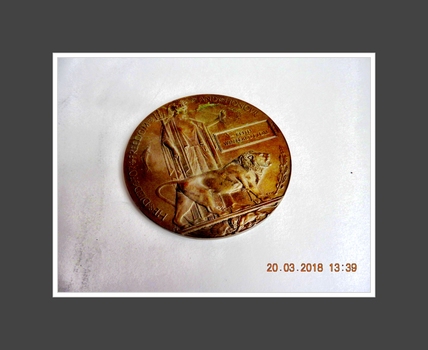 Keith Winterbottom was born in the small settlement of Moulamen near Swan Hill in 1891.He enlisted in the AIF on the 7 April 1916 as a private and allocated to the 1st refit for the 38th Battalion. He was single and 25 years old and a strong 6 footer after working as a labour/timber cutter around Swan Hill. He embarked for France in July 1916 and disembarked at Plymouth on the 10 August 1916. Proceeded to France [ Ypres] on the 16 September and taken on strength with the 59th Battalion on the 8 October 1916. He suffered very serious GSW to his chest, arm, and left leg on the 10 December 1916 and was admitted to the Casualty clearing station at Heilly on the 11 December. His wounds were extensive and major and he died of these wounds on the 12 December 1916. He was buried at the Hospital Cemetery at Heilly, France. His kit that was returned to his mother contained a football, scarf, a razor strop and two ties. On the 18 June 1923 is mother was given the Memorial Plaque 318573 inscribed with her son's name Keith Winterbottom

Inscribed with the name Keith Winterbottom. Presented to his mother on the 18 June 1923. Marble and Bronze Plaque listing the 187 Camberwell and district residents who died in WW1 between 1914-1918. Back up document for Keith Winterbottom's Memorial Plaque. This stone was laid by His Excellency the Governor General Lord Forster PC. CCMG on the 3rd December 1921 AD Honour Board of Camberwell RSL Past Presidents 1953 to 2018

All Camberwell RSL Presidents and the years of service Letter written on A4 paper

See photo for full details. Brendan fought at Gallipoli, was wounded and became a Turkish POW. He survived his wounds but unfortunately died after a pin prick developed into Blood poisoning which resulted in his death Memorial Plaque given to the family of Henry Tippett, killed in Action in France 26 July 1916. Henry enlisted when he was 28 years old on the 6 September 1915 in Melbourne. He was born in Carlton and was living at 529 Canning St. Carlton when he enlisted. A small man at 5'.5'' weighing 9 stone. He was allotted to the 15th Refits of the 7th Battalion. He embarked from Melbourne on the 18 June 1916 on the Kinfaune Castle and landed at Alexandria, On the 29 June 1916.he was transported to Marseilles and one moth later was reported Missing in Action on the 28 July 1916, A court of enquiry concluded he was Killed in Action on the 19 July 1916. He had been in France just 20 days 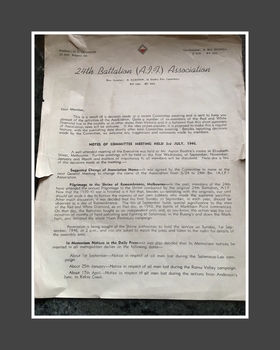 Unique and significant, could be only surviving copy Hand embroidered 'Ode to the Fallen'

Donated to the Camberwell City RSL by Bruce Ruxton in 1995 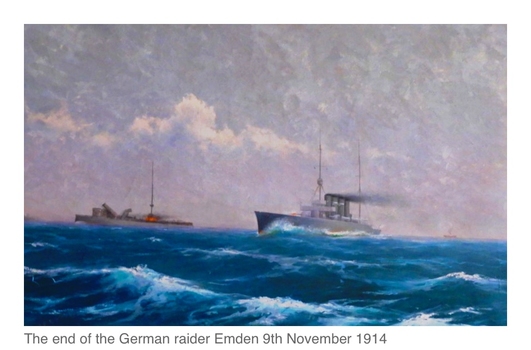 Signed by H Press. Plaque with title 'Last of the Emden' donated by the late Captain H. Press Very significant as a view of the battle action at Anzac Cove during the Gallipoli Champaign. 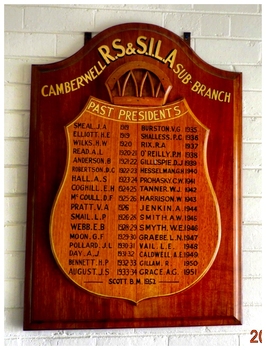 Actual photo taken at Anzac Cove in July 1915 showing the piers constructed to offload supplies and storage dumps on beach.

See photo for many details Camberwell RSL building as at June 2017 Photo - Photo of seven diggers transporting a wounded digger thru the mud on the Somme in 1917. Note burial cross in background.

Actual photo of the condition on the Somme in 1917

See Photo, note the burial cross in the mud behind the wounded digger. Photo - 'Coming out for a Rest' . Australian Light Horse returing to a quiet area after being in action at Latron December 1917

Actual photo of the Australian Light Horse in December 1917