Titles from the three library special collections can be searched online via http://innopac.federation.edu.au, but must be read in the Geoffrey Blainey Research Centre Supervised Reading Room.

On 01 January 2014 the University became Federation University Australia with the amalgamation of the University of Ballarat and Monash University’s Gippsland campus. FedUni brings together skills and expertise throughout Ballarat, Gippsland and the Western region of Victoria for the benefit of our regional communities.

The Federation University Historical Collection is located at the Geoffrey Blainey Research Centre (GBRC) on the top floor of the E.J. Barker Library (Mt Helen Campus) and includes a supervised reading room where collections can be accessed and read. The GBRC also houses the Geoffrey Blainey Mining Collection and the Federation University Library Special Collections.

Federation University Historical Collection is significant because of its emphasis on local education, particularly at the tertiary level. It relates to the Ballarat School of Mines, Australia's first technical school, are an important aspect of the collection. Material on former staff, students and local identities are also housed in the collection. Through the Ballarat School of Mines Federation University is the third oldest tertiary institution in Australia, and has resulted in a strong and important emphasis on mining in the collection.

Hello. I have just seen a photo of Pioneers of Ballarat on the web site. It has the Object registration 15771. A large group of men. I see my great ancestor D GUNN the photo. As I'm searching my family tree, I would love to have the photo of him Any chance that someone can help me with my request. Please contact me on [email protected] Robyn Thompson (Mrs)

My great great grandfather, William Simpson, and his three brothers worked in a mining area called Hard Hills near or between Ballarat and Buninyong. He married Mary Kelly, an Irish Orphan girl,arrived on the Pemberton in May 1849, the same year. Can you please tell me if you can identify a previous gold mining area called Hard Hills or if there is any documentation or photographic records relating to same. My gratitude and thanks in anticipation. Amanda Osborne [email protected] 0437130393 Book - Geological Gossip or Stray Chapters on Earth and Ocean, 1860

Brown hard covered book. Chapter 16 is on gold deposits and discusses the discovery of gold in California and Australia. Dick Richards was the former Principal at the Ballarat School of Mines, and member of Shackleton's Antarctic Expedition.

“He [Dick] was a friend of my mother (then Hilda Allan Wardle) … and his wife, Dorothy, was, I understand a cousin of my mother. …” Dick Richards responds “Hilda was a great friend of both myself and my former wife.” 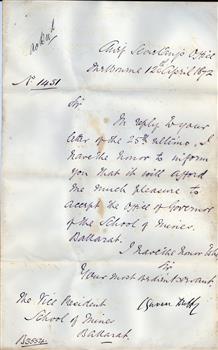 Correspondence - Documents relating to the Ballarat School of Mines, 1872

The Ballarat School of Mines was established to educate in the branches of the science related to mining. The aim was to 'make the School thoroughly practical and accessible to all parties' by establishing both day and evening classes with the resident master assisted by Professors, Lecturers and Examiners of the highest scientific attainments. document - Letter to Frederick Martell of the Ballarat School of Mines Articles on the visit of Desmond Tutu The University of Ballarat was later named Federation University Australia. A plan of the proposed rearrangement of the Ballarat School of Mines Physics Laboratory. These five caricatures are thought to have been made by a student of the era. Three colour photograph of Founders Room, and an honour board in Founders Room at the SMB Campus Administration Building. It lists the Directors, and the School Council Presidents. A number of photographs of a tree and marble plaque in the grounds of the Ballarat School of Mines. It was a memorial to Francis Davis, a former student of the Ballarat Junior Technical School, who died on active service during World War One.

Francis Gordon Davis was born in Ballarat on 09 August 1899. He is the only former student of the Ballarat Junior Technical School who was killed on service during World War One. Davis enlisted into the Australian Flying Corps, Laverton, on 12 April 1918 at which time he was 18 and 8 months and served as a second class Air Mechanic. His service number was 3310. He died accidentally from shock resulting from an accident resulting from skidding a Leyland Motor Lorry at Leighterton, Tetbury, Gloucester, England on 28 January 1919 and is buried in Grave 6 in the Soldiers Corner of the Leighterton Cemetery. Francis Davis was accorded a full military funeral, firing party, bugler and pallbearers. The coffin was draped in the Union Jack and surmounted in several beautiful wreathes sent from his brother 2/A.M. E.H. Davis (A.F.C Leighterton), officer of the A.F.C. Leighterton, Gloucester, Cadets of A.F.C. and many other personal friends of the deceased. The "Last Post" was sounded at the graveside, and the Rev. Major K.D. Norman C. of E. A.I.F. officiated. The grave was to be turfed and an oak cross erected by the A.I.F. London. Administrative Headquarters A.I.F. London were represented at the funeral. (http://bih/index.php/Francis_G._Davis) In June 1922 Alfred Davis, the father of Francis Davis, planted a tree in the grounds of the Ballarat Junior Technical School in honour of hos son. It was the first tree of six planted in the grounds of the Ballarat School of Mines on Arbor Day 1922. Speaking of the planting of the tree by Mr Davis the Chief Secretary (Mr M. Baird M.L.A.), said he trusted the memory would ever remain green at the school. Had he and others not given their lives nothing that we could have done to-day could have retrieved the time. Australians had indeed done splendidly, but they should take a wider outlook than Australia, and reading the history of the Genoa Conference he had been struck by what had been done ... We should honor such men as he in whose memory that tree was planted, and the schools that sent them out to fight for us. He hoped the empire would always be able to produce such men, so that the Empire would always be able to lead the World's struggle for the benefit of humanity. The last post was then sounded by Mr. H. Green. ... (Ballarat Courier, 19 June 1922) Photograph of Philip and Elizabeth under the Barcaldine Tree. It was in the shade of this tree the Australian workers rallied and the Australian Labor Party was formed after the ramifications of the great shearers strike in 1891.

Its twisted old trunk is gnarled, its disembowelled carcass plump with cement and now, like many outback legends, its cadaverously pale and very dead. It has stood, an unmolested leafy sentinel, over Barcaldine’s Railway Station depot since the 1880s. It was a living Australian Labor Party memorial and heritage-listed. The double centurion, Oak Street’s most senior resident, was respectfully nursed into its dotage by Barcaldine’s faithful. Countless thousands of travellers photographed it, patted it and peered up at its bushy green tops with dutiful reverence. ... And then, by an act of craven foul play, it was murdered. Allegedly. Cold, hard forensic science pronounced death by poisoning. Sometime around May Day 2007 they reckon. (Australian Travellor, November 25, 2007.) Book - A Descriptive Catalogue of the Minerals in the Museum of the School of Mines, Ballaarat, 1882

Brown soft covered book of 94 pages with gold lettering on the front. The book includes a plan of the museum layout, plan of the grounds and buildings of the Ballarat School of Mines and a prefatory notice by James Oddie. It also includes handwritten notes by Curator Ferdinand Krause. .2) Business card of I.H. Barbery, engraver with F.W. Niven. The lithography of the plan of the Ballarat School of Mines at the back of the catalogue was undertaken by F.W. Niven.

The Museum of the Ballarat School of Mines was established in 1872. The curator in 1882 was Ferdinand Krause. Prefatory Notice by James Oddie). The want of a guide through the technical collections of The School Mines has long been felt by visitors and students - a guide , not so much to those who merely 'look' at the various exhibits in the Museum, but an instructor to those who desire to take away with them some practical information on the natural occurrence and economical value of the objects exhibited. This want is being filled by the labour of Mr. Krause, whose first installment - 'A Descriptive Catalogue of the Minerals' - is herewith represented to the visiting public." Introduction to the catalogue: " The collection is still in its early growth, and far from being a complete representation of the Mineral Kingdom; many varieties, species, and even whole groups are absent. This state of incompleteness will, no doubt, be adjusted in the sequence, and progressive lists issued from time to time. 'Ad interin' the present catalogue will, be found useful to students and visitors of the School. As far as practicable, the classifications of the minerals accords with that adopted at the Royal School of Mines, London. The numbers prefixed to the species in the catalogue agree with those on the descriptive labels which accompany each specimen, and also with those attached to the specimens themselves. On the descriptive labels the chemical composition of the minerals is expressed in formulae usually employed in standard mineralogical works. Students who have note paid attention to mineralogical chemistry will note that each dot over a symbol is equivalent to one atom of oxygen, .... A bar through a symbol denotes a double atom of the base, .... " In 1882 the collection was housed in 33 cases. The catalogue outlines the specimen types housed in each case. The item was a donation to Ballarat School of Mines sometime in the early forties. It was handed in to Geoff Biddington thinking it may have nostalgic relevance to the Museum Collection. He handed it on to Bill Ryan who was the collector - Museum Exhibit. The type of solid brass ruler may have been used in Drawing Offices of Consultants - Engineers, Architects, Surveyors. "The Principal of the Technical Art School (Mr HH Smith) states that application for admission to the Girls' Preparatory Technical School have quite come up to his expectation and it is anticipated that the school will have a very successful opening next year. In order to give students who are undergoing examination for qualifying or merit certificates an opportunity of joinng, it has been decided to extend the date for receiving applications." 5 pages of photocopied and handwritten notes (located with 04473) 3 Foolscap size typed pages that is a list of guests attending the centenary dinner at the School of Mines, Ballarat

The Centenary dinner was to celebrate the centenary of Technical Education in Victoria in 1970. Handwritten list of Ballarat Technical Art School subjects. This are most probably a legend for enrolments.