The European settlement of Greensborough was from 1839 onward. The Society's aim is to collect, catalogue and preserve the history and heritage of Greensborough and its environs from the earliest records to the present time. Whilst called Greensborough Historical Society, its coverage is not limited to that area alone and includes Greensborough, Watsonia, Macleod, Montmorency, Briar Hill, Lower Plenty and Bundoora.

The Resource Centre at Glenauburn Road Lower Plenty is open every Thursday (10am - 3pm).

The Greensborough Historical Society Inc collection focuses on historical and current information relating to Greensborough and surrounding areas, including the former Shire of Diamond Valley. Information is from mid-1840 to the current time. Items include artifacts, photographs, documents, oral histories, maps, school yearbooks and uniforms, books and collected current newspaperr clippings relevant to the area. There is a large digital collection of photographs.

The collection has historical significance in that it brings together information relating to the settlement of Greensborough and district from the mid 1840s. The Greensborough Historical Society Inc was formed in 2010 to collect, preserve and catalogue the history and heritage of the area from earliest records.

Hi Greensborough HS, we've really enjoyed the photos you put up over the holidays. They give a wonderful insight into the history of your region. Keep up the good work. VC Admin.

Hi, my name is Kim Lobb, i am the daughter of Lynn Lobb and the grand daughter of Olive Lobb who originally owned Lobb's kiosk i was wondering if anyone has photos of my dad when he attended Greensborough Primary school or Watsonia Tech. Thank you for you time. Kim These photos were part of an objection to the proposed development and subdivision of part of the historic Banyule Homestead property.

The Banyule Homestead dates from 1846, owned and built by Joseph Hawdon, sold in 1867 to Dr Martin. Leased to various farmers and eventually the land (274 acres) was subdivided in 1958. The Homestead presently sits on 2 1/2 acres of land. 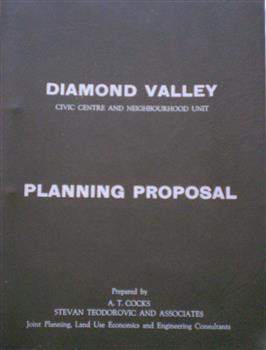 This document proposes the change of land use from farming and quarrying to residential. This also includes the proposal for a Civic Centre in the (then) Shire of Diamond Valley. The plans listed in the 'Schedule of Plans' on last page are missing.

Includes proposal for the Aqueduct to be converted to an underground system. Includes statistics relating to population increase. 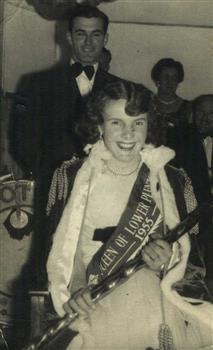 Photo of Margaret Gibson (later Blackbourn) being crowned Queen of Lower Plenty in 1955.

An advertisement for Greensborough Hotel in the town of "Greensborough, picturesque township on the Plenty River, 13 miles from Melbourne."

Photograph show the "new brick building with all modern conveniences'. Greensborough in the 1930s was a popular spot for picnics and holidays. Map of the suburbs of Ivanhoe, Heidelberg, Rosanna, Macleod, Watsonia, Greensborough and Eltham. Dates to mid 1950s. An Advertiser on this map may be found in the Hurstbridge Advertiser Friday 17 December 1937, page 7: "Lyon Bros, of Eltham garage, suggest in their advertisement on the front page of this issue. that motorists should have their cars checked over by them before Christmas, so that any 5mall defects which might militate against the pleasure of the trip, might be remedied." As does "The Montsalvat Plant Farm" in The Age of Saturday 5 September 1953, page 48.

Shows early streets and open space in these areas. 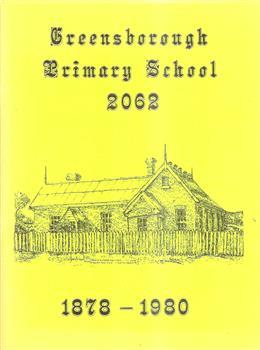 Published to celebrate the centenary of the Greensborough Primary School in 1980. Centenary celebrations were postponed for two years while new buildings were constructed.

Contains the history of the school as well as current (1976-79) information and photos of staff and students. Principal: Ron Lucas 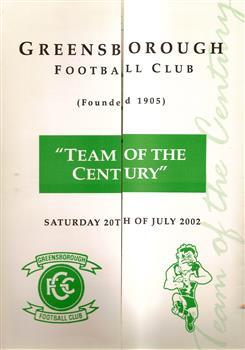 A3 pamphlet with central fold. Printed in green on white background. Contains the names of past players and the teams chosen for the team of the century as well as 1950s and 60s and the 1980s.

Published to 'celebrate the achievements of so many outstanding individuals' who played for the Greensborough Football Club in the 20th century. Foolscap size book. 99pages, printed on one side of page only. Blue cover with white text. Includes tables and photos.

A complete record of the DVFL season 1981, includes reports from affiliated clubs, scores from the seasons games and winners of best and fairest awards for all age groups.

This annual report covers many teams from within the Diamond Valley area. Includes junior and senior teams.

With the compliments of ... Diamond Valley Football league 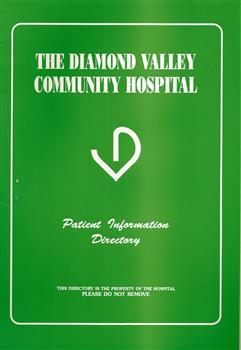 Diamond Valley Community Hospital was first opened in 1942 (Note: a 7 bed hospital opened in 1934 known as Genista House at 23 Grimshaw Street) to serve the community of the Diamond Valley. The hospital closed in 2000.

This item gives a snapshot of hospital services at the time and includes advertisements from businesses in the surrounding area.

On cover:"This directory is the property of the hospital. Please do not remove." A celebration of student awards 1978. Assembly program includes other jubilee functions to come in 1979.

Macleod High School Silver Jubilee celebrated 25 years since the school was founded in 1954. Published to celebrate the silver jubilee of Macleod High School 1954-79, this booklet lists student leaders over 25 years. Photos are included from the 1950s. This book is significant to the history of the area. It contains many historic photographs and details of early life in Diamond Valley. 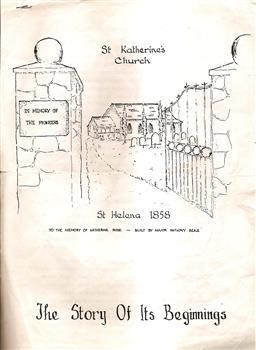 Tells the history of Major Anthony Beale, how he came to Victoria and how the area of St Helena got its name.

History of St Katherine's Church and the Beale family, pioneers of the Greensborough district in the 1840s.

"To the memory of Katherine Rose - built by Major Anthony Beale" 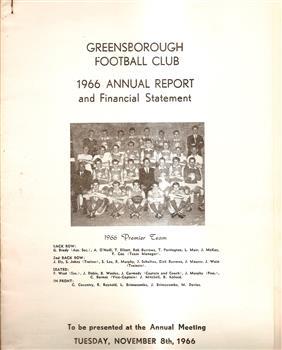 Report to the Annual Meeting of the Greensborough Football Club. Outlines persons involved in the club, activities for the year and includes statistics and financial statement.

A snapshot of the Greensborough Football Club in 1966.

Back cover has an artist's impression of the proposed new hall and dressing rooms to be erected at the War Memorial Park in conjunction with the Park Trust and Greensborough Cricket Club. 1965 amended version of the Constitution of the Greensborough Football Club. Date of amendment 10/11/1965.

Outlines the 'objects' of the club and rules relating to the running of the Greensborough Football Club. Early in the 1970s a number of people felt the need in the Greensborough community for an Arts Society, Prominent among them were were Ron Reynolds, Digby Watson, Murray Pulford, Roland and Maria Schultz. An article appeared in the Greenhills Community News seeking those interested in participating in such a society. A meeting was held in the home of Ron Reynolds on 15th July 1970 with approx. 20 people attending. 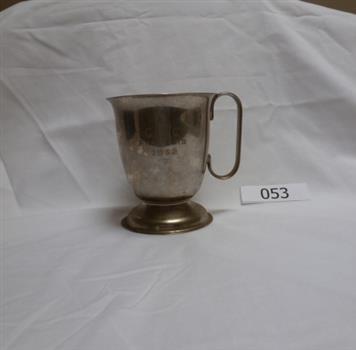 Silver presentation cup with footed base and handle.

Cup presented to the players in the winning team in the 1952 Australian Rules Football premiership in the Diamond Valley Football League. The winning team was Greensborough Football Club. This mug belonged to Doug Hall.

This mug is one of a limited number engraved for the premiership team. 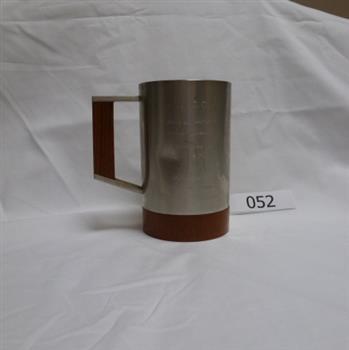 Presented to players in the Greensborough Cricket Club who were runners-up in the Double Wicket cricket competition during the 1979-1980 season.

One of a limited number produced and engraved for this purpose. Owned by player Doug Hall. Black and White photograph of the Greensborough Football Team 1949. Includes name of players and support team. Mounted on brown card.

A team photograph of the 1952 Australian Rules Football team from the Greensborough Football Club. Includes players and support staff.

This photograph is a record of those involved with the club in a Premiership year 1952. Black and White photograph of the Greensborough Football Team 1958. Includes name of players and support team. Mounted on brown card.

A team photograph of the 1958 Australian Rules Football team from the Greensborough Football Club. Includes players and support staff.

This photograph is a record of those people involved in the Greensborough Football Club in 1958. A team photograph of the 1955 Australian Rules Football team from the Greensborough Football Club. Includes players and support staff.

This photograph shows all those involved with the Greensborough Football Club in the 1955 Premiership season. Book - The Sentimentalists: a novel by Dale Collins

Thai novel was given to Alan Partington by his grandfather, David Medhurst at Christmas 1929. A review of the novel appears in News (Adelaide) Wednesday 21 December 1927, page 5.

The inscription shows the relationship between the Medhurst and Partington families. Mrs Fort has lived in the Greensborough area all her life and is a member of the Partington family and the Whatmough family, pioneer families of the district. She has written her memories of early families in the district.

Contains information on many early families, both from Mrs Fort's memories and research into family history. The item will be transcribed into an electronic copy.

Inside cover: Faye (Partington) Fort's memories of the old Greensborough she remembers. Tells te story of the first Japanese 'war bride' to be admitted entry to Australia after World War II.

This book was owned by Ruby Fort. Book - Mick Tracy: the Irish scripture reader: or The martyred Convert and the priest, a tale of facts.

This book was presented as a gift to Allan Partington, a member of the Greensborough Methodist Sabbath School in 1917.

Shows the attendance of children at Sunday School in the early 20th Century. Owned by Allan Partington. Book - ANZACS at War: the story of Australian and New Zealand Battles. by John Laffin 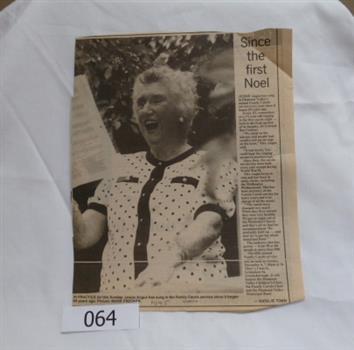 Newspaper clipping - Since the first Noel

Describes Mrs Jessie Angus's participation in the Diamond Valley Carol Service over a period of 69 years.

Mrs Jessie Angus was a local identity in the Greensborough area. She was a member of the Partington family and involved in local activities. 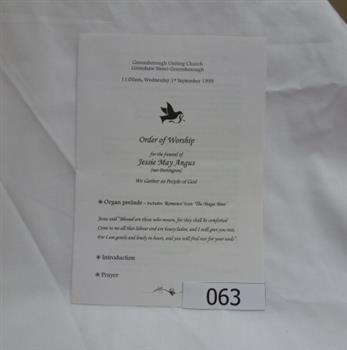 One A4 page folded to A5. White paper with black text.

Order of Worship for the funeral of Jessie May Angus (nee Partington). Distributed to those attending her funeral on 1st September 1999

Mrs Angus was a Greensborough identity and a member of the Partington family.