Lara RSL Sub Branch. We are members of the Returned and Services League Australia. For further Information about RSL Victoria, see www.rslvic.com.au.
The building we use was formerly the Corio Roads Board, then Corio Shire office until 1937. The centre section was built in 1863, and the wings added in 1923.
It is a heritage listed building and is one of the oldest remaining buildings in Lara.

Military memorabilia from all conflicts which Australians were involved. The Battle of Amiens, also known as the Third Battle of Picardy (French: 3ème Bataille de Picardie), was the opening phase of the Allied offensive which began on 8 August 1918, later known as the Hundred Days Offensive, that ultimately led to the end of the First World War.

By the end of August 8—dubbed “the black day of the German army” by Ludendorff—the Allies had penetrated German lines around the Somme with a gap some 15 miles long. Of the 27, 000 German casualties on August 8, an unprecedented proportion—12,000—had surrendered to the enemy. Though the Allies at Amiens failed to continue their impressive success in the days following August 8, the damage had been done.

The battle of Amiens,France,8thAug.1918.Lt R Downes MC.addressing his Platoon from B Coy.29 BN.during a rest near the village of Warfusee before the advance on to Harbonnieres.Pte Charles Olive of Lara is 3rd,from the left carrying the Lewis Gun. He was killed in action three weeks later charging a German machine gun post. Earlier in the day, he had successfully taken two machine gun posts. Photo from Australian War Memorial, Canberra. 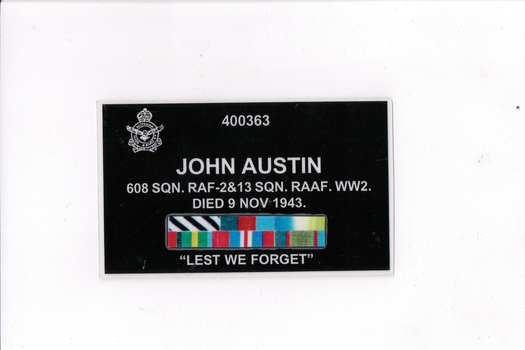 Small crown with five coloured glass chips embedded around the base and the cross of St George on top.It has a Burgundy coloured Fabric inlay on either side and two clips on the back.

Worn by infantry officers.Majors and above. The Returned Serviceman's Gala Day was held on the Lara main oval on Saturday 8th November 1919. Each returned serviceman was presented with a medallion with their name on it. Copies of the badge are held at the Lara RSL Sub Branch. Lt General Smith is presenting a badge to a serviceman in one photo. The other photo is the serviceman's race of 100 yards Part of an article from the The Argus Newspaper dated 16th June 1923 relating to the arrival of SS Moreton Bay and the British sailors due to enlist in the Australian Navy.

Circ 1923 historical information on the immigration to Australia.

Written on the article is a comment " On the other side is an account of the storm which the Moreton Bay passed through". E and F Subsections No 2 Battery. Pair of chromed hardened steel handcuffs with keys and cardboard box with instructions written on inside of lid. Also has woollen fleece padding and a small chamois in the box.

These handcuffs were issued to A.E.Rich who was in the military police.

SAF-LOK 54061. The box has full instructions of how to operate the handcuffs with the numbers 3416/58 written under the lid. A puttee is a cloth band that was wound round a soldier’s leg from their ankle to their knee. They were designed to provide support when walking and protect against harsh weather conditions. Many Australian soldiers developed a painful medical condition during their service on the Western Front called trench foot. The primary causes were wet feet and unsanitary conditions but puttees were also partly to blame as they limited circulation to the lower leg and foot. These puttees are a collectors item, they are the real thing, used in WW1 and made a short return in WW2 and were used as ceremonial dress in Malaysia in the 1960s, these ones are WW2 issue. Slang words used by Australian diggers in World War One. A brief history of the effort made to return Air Force Personnel to their home lands.

In the middle of the Booklet is an autographs section. Autographs are from fellow ship board travelers. The front has a large A with the words Anzac appeal underneath. On the back is the makers name (A.J.PARKES )with the price, $2 for the red, $1 for the green & gold. Flag White Ensign is made up from Commonwealth Countries and displayed as a flag- Top left-hand corner British flag, right-hand top corner Coat of arms of South Africa, bottom-left Coat of Arms for Canada, Bottom right corner Advance Australia Coat of Arms, flag center is for India is a yellow and red rosette and New Zealand is represented by four white 5 pointed stars centralized as representation of the Southern Cross.

The flag on the left border is marked with "Groves" Book - The sixth of June by Lionel Shapiro

Hardcover mustard coloured front, back and spine with the title on the spine.

A WWII historical novel based on 1942,1943 and 1944. Advance of science adds an incredibly romantic aura which is the vital element.

Historical novel with 4 books making up the complete novel.

Black metal magazine for SLR rifle. Two pieces, one large and rectangular and one small.

The SLR (L1A1 Self-Loading Rifle) was the standard issue rifle for the Australian military from 1954-1988. This weapon saw service primarily in Vietnam, and was used by most Commonwealth countries. The magazine fopr the SLR is used to hold bullets and allow quick loading.

This object is significant due its representatives. The SLR was the standard issue rifle for thousands of Australian soldiers throughout the 20th Century, and the magazine was a ubiquitous item carried by all soldiers.

Official History of Australia in the War of 1914-18 - Volume XI - Australia During the War. Illustrations, Photographs,

This book deals almost entirely with occurrences within Australia. It describes the background - political, social, industrial, economic-against which the war effort of Australia was projected.

This book deals almost entirely with occurrences within Australia. It describes the background - political, social, industrial, economic-against which the war effort of Australia was projected. As You Were 1949 Illustrations, photographs, Green coloured hardcover front and back with light green test on front page 'As you were' and '1949'. There is a rectangular relief showing three tri servicemen. The inside front and back covers have illustrations of Air force, Navy and Army on a dark green background. The Southern Cross is also a feature of the illustrations.

Compilation of articles, short stories and poems of events and experiences of servicemen and women. This volume recalls the courage and humour, the boredom and the achievements, the travel and adventure and misdeeds, and above all the good comradeship of the services in the war years.

Historical recount through stories, poems and illustrations of Australians in World War 2

To the memory of the fallen ' They gave their lives. For that public gift they received a praise which never ages and a tomb most glorious - not so much the tomb in which they lie, but that in which their fame survives, to be remembered forever when occasion comes for word or deed...' Postcard with a black and white image of citadel and tombs of the Mameluks, Cairo. Has writing on the reverse in black ink, and some scribble from a blue pen.

This postcard was sent by an Australian soldier from Cairo to Australia during the First World War. It has the capacity to illustrate issues of British Imperialism, Australian approaches to race and religion, and the experience of Australian Soldiers experiencing world travel during the war.

"The polish of the main pyramids is decorated in the interior of the tombs. I use to pass this often when going for stores in Cairo. It is rather nice but the Gyppoes sleeping on the foot path, and other stupid pranks. Harvey." Publ. the Oriental Commercial Bueau. Port Said. Pay Book Of World War One Soldier of Mc Intyre 1918 Contains Pay details ( Earnings and Other Credits )period 1916 Next of Kin, Medical and Training Courses Completed

Book - Soldiering On - The Australian Army at Home and Overseas

This volume is like a veteran 'gong' - winner with years of tough going and breathless incidents to draw from. The service and the blokes in it have been able to dig into this pile of gen. and present some amazing stories, pictures, poems, graphics and cartoons. The pictorial history of HMAS Melbourne with rare photos. Now a scarce title and highly desirable title that is now long out of print. Has provenance history of all ships movements from 1955 till decommissioned.

On the front page is a picture of HMAS Melbourne with the words at top "H.M.A.S. Melbourne. At bottom are the words in orange, '25 Years'. In white, are the words 'by Ross Gillett' then 'Forward by Rear Admiral G.G.O. Gatacre C.B.E. DSO. DSC & Bar, RAN'. On the rear page is a list of all the Captains that served on the HMAS Melbourne between 1955-1980. Political and Social History of Australia in the War of 1939-1941. A history of political events in Australia during the War and merges into the history of world events. Matters which found their eventual significance in decisions made in the Australian Cabinet, the Parliament and the Australian electorate.