Magnet is a registered charity and not-for-profit incorporated association. Our aim is to provide a supportive environment for people interested in photography. We provide education, exhibitions, activities and support. Our main interest is archiving and storing photographic collections. 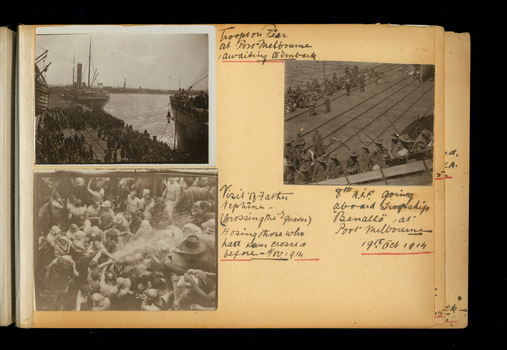 Troops waiting to board / aboard ships - red cliffs00157.tif

Three photos on a page from an album

Troops on pier at port Melbourne awaiting to embark 8th A.I.F. going aboard torp ship 'benalla" at port melbourne sep 1914 visit of father neptune (crossing the equator) hosing those who had never crossed before nov 1914 soldier posing on horse in camp Rows of graves from the Battle of Fromelles, then called Flerbaix. Among the graves is that of Captain Norman Gibbins, 55th Battalion, born in Ararat Victoria. A Gallipoli veteran, at Fromelles, Gibbins fought a desperate rear guard bombing action while under heavy German attack. It allowed many Australians including the wounded to get back to the safety of their own lines. When his path was blocked by dead and wounded Gibbins stood up and was fatally shot. His body was recovered and moved seven kilometres behind the lines where his grave was one of 111 Australians initially buried at Sailly-sur-la-lys. A group of air craft mechanics including Private Jim Stewart (far right) of the 3rd squadron. Australian Flying Corps. A popular, carefree character, Stewart played as a ruckman for south Melbourne in the Victorian Football League between 1915 - 1920, though war service precluded for much of 1917 - 1919 Pacifist who was a stretcher bearer on the Western Front. Photo by Les Chandler. 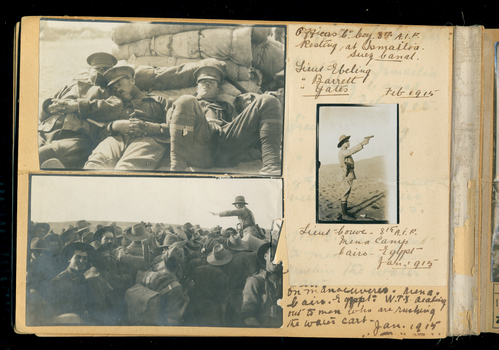 Officers of the 8th Australian Imperial Force. Officers resting, while on manoeuvres, among them William T. Yates of Camperdown. Yates survived Gallipoli, went to France where he won a Distinguished Conduct Medal at Bullecourt and survived a bullet wound to the head in 1917. In 1919 he went to America to study agriculture prior to becoming a soldier settler in the Sunraysia region. The rush for water the heat of the desert among parched troops on manoeuvres. Two photographs on a page from an album Three photos on a page from an album Les Chandler. Pacifist who was a stretcher bearer on the Western Front