The Archives manages records of The Melbourne Athenaeum which was founded in 1839 as the Melbourne Mechanic's Institution. Its purpose, "the diffusion of literary, scientific and other useful knowledge to members and the general public, was achieved by maintaining a Library, Museum and Reading Room, and offering classes and lectures. Land was purchased in 1840 in Collins Street and the original building, a two-storey, rendered-brick structure, was completed in 1842. The name was changed to the Melbourne Athenaeum in 1872 reflecting the cultural changes in the society it represented. The Library continues to operate.

Archives, free entry to research the collection The Melbourne Athenaeum Library is Victoria's oldest subscription library. Members pay a yearly subscription of $99 ($89 concession) to borrow up to 30 items at a time for up to 4 weeks.

The Archives project commenced in 2005 and has provided research support for a range of research projects including a volume of essays about its history; publication of several papers in historical journals; an exhibition of pictures (displayed in the theatre foyer) and assisted numerous students, including PhD candidates, family historians and,, writers of fact and fiction.

The archives collection reflects the work of the The Melbourne Athenaeum, previousy Mechanics' Institution, where the Library has special significance to the city not only because of its continuous service to its members since 1839, but also to the links to the Melbourne's founders, far-sighted men from all walks of life who understood the need for knowledge and the importance of literature. The institution has operated from the same site in Collins Street since 1842 when the original building, a two-storey Georgian-style construction, was first occupied. The Melbourne Athenaeum Archives covers the history of the institution which was formed in 1839, a few years after European settlement. The visionary men involved established a cultural and social hub for Melbourne that has endured despite financial difficulties. The Melbourne Athenaeum continues to be managed by a voluntary Committee of Management, supporting a popular subscription library and a theatre that provides a wide variety of live entertainments for the citizens of Melbourne.

I have an admission ticket(in 2 Parts) for the film "Jazz Singer" starring Al Jolson. It is dated Monday April 1. It doesn't have a date but my father has written 1926. The only information I can get leads me to believe that it was actually 1929 not 1926. Was the film being shown in 1926 at the theatre. Any help appreciated. Thanks Sylvia Paper program; the program contains some photographs taken during rehearsals. The play was presented by arrangement with NIDA, The play was originally dramatized by Bert Bailey from the works of Australian writer Steele Rudd. Newspaper Article - The World's Depression, Its Cause and Cure lecture by Mr. W. Shiels at Melbourne Athenaeum Hall - The Age 19 June 1894 Theatre Program - Once in a Lifetime (play) by Moss Hart and George S. Kaufman, no date, no venue Festival Shaw 1989 part of the 1988 comedy festival Two part show based on a selection of Shakespeare sonnets Newspaper article - Saffire (concert) performed at Athenaeum Theatre 5 July 2003. Saffire, a high-powered "dream team" of four Australian guitarists - Gareth Koch, Karin Schaupp, Antony Field and Slava Grigoryan - who, as well as being exceptionally talented, demonstrate an impressive willingness to sublimate their individual egos for the greater good of the ensemble. Newspaper Article - Tell Me Tonight (film) screened at Melbourne Athenaeum Theatre from 6 May 1933 - Argus, Saturday 6 May 1933 Paper program; coloured cover; 16 p. includes articles about the play and the actors.

The play is part of MTC's 25th anniversary season March to September 1978, directed by Mick Rodger. Ray Lawler was Deputy Director of the company. The program includes simplified family trees of the House of York (White Rose) and House of Lancaster (Red Rose). 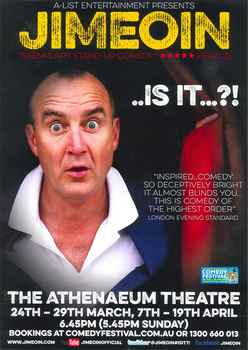 web page - Eureka Stockade - the film was first screened in the Athenaeum Hall, Melbourne on 19 October 1907. 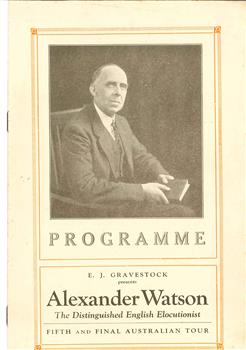 Program: Regarding the details of the recital to be given by Alexander Watson commencing Saturday 21 May 1927. Program is on beige paper with dark brown print; 8 pages

Fifth and final tour of Alexander Watson considered to be the leading British Elocutionist with 25 years' experience. The program was directed by E J Gravestock presented in Melbourne by Frank Talbot. Two Matinee recitals were held at the Athenaeum Theatre on 24th and 27th May at 2.30pm. By 2000 the School’s confidence in staging theatrical productions had grown to the point where it could confidently stage Les Misérables at the Athenaeum Theatre. The production involved a cast and crew of over 140 current students, staff and Old Michaelians and almost sold out eight performances. 2001: St Michael’s becomes the first School to stage a production in Melbourne’s Athenaeum Theatre with the performance of Les Misérables