The aims of the Old Castlemaine Schoolboys Association
- To hold an annual reunion of old schoolboy’s. (2nd saturday in october each year)
- To keep in touch with the friends we had made from our school days.
- To foster and cherish the tie of affection for castlemaine.
- To assist the schools with new books for their libraries.
- To financially assist the castlemaine secondary college chaplaincy program
- To financially assist one school on a rotational basis each year.
- To bring together history and photographs for our archives.

Newspaper Clipping - A Reflection of the Times 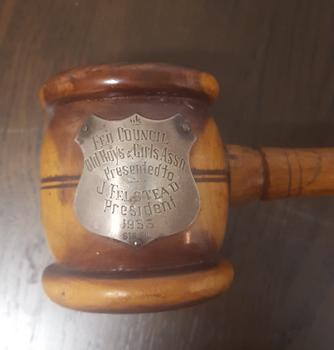 Timber Gavel with silver coloured shield mounted on side of head Honour Board - Past Presidents Written by George E Scott who was born in Creswick March 1900. Moved to Vaughan in 1904. Attended Yapeen State School utill 1913 then to Castlemaine high school and technical schools. Poem written in 1950s.

There is a lift to the old boys step tonight, and is feeling young and gay his eyes are bright and his heart is light, and his thoughts are far away. Back in his dear old Castlemaine, or out in the hills around living the days of his youth again feeling his pulses bound. For he's just answered the call that comes to the loyal hearts every year insistent, clear as the beating of drums it falls on the listening ear so the old boy went and his mates went to back home in their hundreds strong and years were bridged in at long day through in story and speech and song. At at the Bush school love so well he gathered with his comrades gay, old Lads and Lassie's with tales to tell of memories tucked away. And bright eyed children had joined them in there happy young faces shone, as they showed old scholars are pride and care in the school that was handed on. Around them the bushland was bright with flowers, and the dear little orchid blue Bloom there with bright, in the sunlit bowers- for it is our emblem true. So the old boy drained through that day again, and it lifted his heart like a song, then Knight came down on the old home town and the hall, with its happy throng. In long brave lines they had mustered there as they had on the days of yore, and as they answered the roll - but the years take toll- there were mates who would come no more. The toast called, and the speeches made, when, trooping into the hall, with faces bright, and their eyes alight, came the girls- the toast of them all. So they broke up and wandered and formed into groups, while many have time for a song, But bashing the ear was permissible here, and they kept at it- steady and long. So the hours flitted by happiest notes of memories sweet old refrain, old friendships renewed - past doing's reviewed, the old boy was feeling strain. For his ears had been punished, his hand had been wrung, his voice was hoarse as a crow, with an ache in his jaw- "I can't take any more, while I'm all in one piece, mates, I'll go." With Auld lang syne is singing a broke up and parted, "next year we will see you again" when the message goes ringing, their thoughts will go winging and calling them back to 'Maine Book - A History of the Metcalfe Group of Fire Brigades Dear old boy, the 24th annual reunion will be held in the town hall, Castlemaine, on Saturday ninth October, 1937 at 8 PM. You are earnestly invited to attend. And your subscription and tickets for reunion – the annual subscription 2/6 is now due. Members are urged to pay on before the night of meeting. Enclosed please find ticket (8/6) for the reunion. Change of address – members are asked to notify change of address age limit – the age of joining members is now 30 years. Extension of radius- the radius for membership is 7 miles. Members are urged to advise all of these to join and make the association one of the strongest in the state. Please try and secure new members. honor boards – 14 schools in the Castlemaine District have been presented with honour boards they are as follows – Fryerstown, Campbell's Creek, Chewton, Guildford, South Castlemaine, North Castlemaine, Woodbrook, Faraday, Elphinstone, Barkers Creek, Harcourt, Winters flat, St Mary's, Yapeen. School prize endowment – at the 1935 reunion Document - Early Years of the Association