The QVWC Archives is a current venture focusing on organising the collection to ensure preservation of the history, and business activities of the Centre and Trust, whilst allowing for acknowledgement the people and organisations who have worked within the building. The collection comprises of items after 1989, when Monash Health took over the hospital and the people of Victoria fought to keep the iconic building and legacy "for women, by women" thriving.

This is a project, run thanks to the successful grant application to Helen McPherson Smith Trust. The archival project is supported by the QVWC Trust, and there is great interest in the wider community already. The QVWC wants to continue to acknowledge its history but more importantly to use this history to grow operations. This collection has already been acknowledged by PROV in 2014 Multimedia History Award for the Centenary Digital Timeline Website project and the National Library of Australia as they have archived the QVWC website. This project will confirm both the social and cultural significance of the building and the organisations who have occupied the building by collaborating with Victorian Collections.

QVWC has a take down policy, if you believe we may have breached copyright please contact the centre. A4 multi coloured flyer. Facade image on front and internal images of building on the back of flyer. 20 stickers to each page. Purple logo on cream. Exhibition Program - The Return of the Goddess

A5 sized booklet. cream paper. 44 pages plus 3 page addition in back of program. Program provides short biographies of the 50 women featured.

First art exhibition in the QVWC.

Colour photograph. Level one south eastern corridor looking into where in 2015 is a doorway at the wall and where is the archive room. Taken during restoration inspection. Pamphlet - An Exhibition by Paloma White of paintings, drawings and prints

A flyer used to announce exhibition opening. Colour example of work on left of flyer. Pamphlet - Celebrate a woman in your life Colour photograph. Ground floor of QVWC building, facing north west towards the reception desk and down the corridor towards the northern foyer, stairwell and lifts. Two people in background in north foyer. Taken after restoration works had been completed. 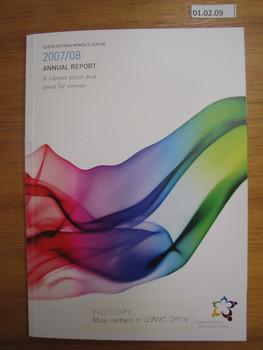 book with 24 pages. coloured images and text throughout. Colour photograph. Ground floor acing south west into QVWC tower in what was to be the cafe. Entrances show access corridors to ormer towers. New structure for roof seen with black tarp. Taken during restoration inspection 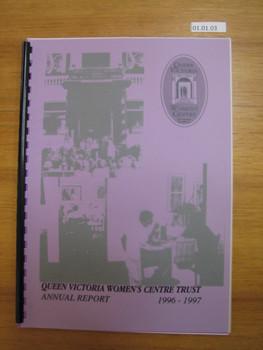 One double page loose from centre. Newspaper Excerpt - Making her mark in a man's world A3 sized poster. Requesting people who were born, gave birth or trained at the Queen Vic. Hospital to contact the QVWC. Cream paper with Black text and purple header and footer banner.

coloured images. cardboard. image of cupola on front and program information on the back. 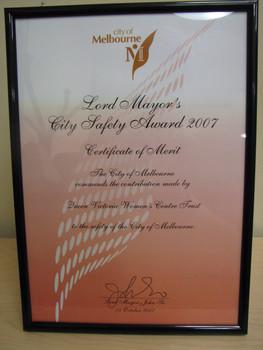 Colour photograph. Reception area on ground floor southern entrance. Desk has an assortment of flyers and brochures. Behind reception area is a building guide. Unidentified woman appears to the right o frame in front of the reception desk. Taken from the entrance facing north

A quilt made for the centenary of the Hospital made for the International year of women 1975. Re-purposed from a quilt used at the hospital. Given to QVWC in 1997 for the grand opening.

Patsy Coverdale wrote on about the artwork which is found with the bedspread "This trousseau bedspread commemorates a century of our daily living, of four generations, a bedcover where many loves and lives have begun and ended. Once immaculate, its years of service, of blood, sweat and tears, have seen so many building washes that today's embroideries would shrink from. I rescued it, patched its tears and wears with needlework from ancestors and aunties to celebrate the International year of Women in 1975. It symbols include the IYW to the left, women's work and its rhythms and cycles, a pearl button for our pleasure centre. The male phallic symbol illustrates the organ's early development and its natural power with the energy of relativity behind it all." A4 sized bound report. 18 pages plus appendix. colour photos throughout including colour copies of media. Was a standard size but has been cut.