L-R: George and Lucy Dick, Lucy Ranson (nee Hogan), Jean and John Hogan.|Family posing in front of loaded up trailor and car before a departure. Japanese coin with milled edge featuring crest/design on one face and pattern and currency value on other face.

Coin found at Camp 13 when huts where being dismantled and relocated. Photos and foolscap sized documents in a black A 4 size folder.

GARFIELD ž Kilmartin Road, Cooma.|John Thomas Dougherty, an American, came to the Tatura area in 1874. He married Emily Whitnell from Whroo in 1883 and they had nine children.|He started building Garfield in 1886 and it was not completed until 1897. The building was named after President Garfield of America.|The building still contains the original Ericson wall telephone with its tag inside dated 1906. The house contains many features such as Jacobean over mantel and fire surround in the dining room, stained glass, a push button bell, and a stair well leading to an underground living area used in the summer for coolness. A new glass stair well was installed in the 1980®s to allow more light into the area. J.T. Dougherty died 1936. Tatura Premiership Football Team, 1952.|Back row: C. Ryan, B. McHugh, T. Ryan, I. Bunn, T. Deane, W. Corrigan, J. Mactier, B. Young, K. Anderson, H. Parker.|Centre row: S. Vagg, K. Binion, P. Crawford, L. Joyce, V. McKenzie, R. Connors, F. Joyce, R. McDonald, B. Ransom.|Front row: J. Trevaskis, R. Warnett, R. Smith, R. Daly, W. Pritchard, D. Brown (cc), G. Kerrins, P. Warnett, E. Davies.|A local football team was in existence from about 1885, and it is interesting to note that the members were called the "Tatura Bohemians" in 1888!|In 1894, when D. Heaphy was the first President of Tatura Football Club, they joined the Goulburn Valley Football Association.|"Travel to distant matches was undertaken by horse and jinker, buggy and pair until Charlie Brady, the storekeeper, suggested that special trains be run and put up the guarantee" ...quote from W.H. Bossence "Tatura" history.|Tatura teams were Premiers in 1898, 1901-02, 1904-05, 1952-53.|Tom Hogan was the first local player to be offered a game in the city of Melbourne, soon followed by Archie Wilson.|Robert Mactier, V.C. had played football for Tatura before leaving for service in WW1. Coin found at Camp 13 when huts were being dismantled and relocated. John Stephen Hill came to Tatura in 1912 and became Manager of the Tatura Free Press in 1916. He died in 1953 having being very involved in community affairs throughout his life in Tatura.|Photo features two men posing in front of the Free Press, with a bicycle in the background. Wooden plaque mounted on a wooden base of Hilskreuzer "Kormoran". Depicts naval insignia. 2 drawing pins and cord on the back for hanging Dr. Leonhard Adam was an internee in Camp 2. Cartoon like painting depicting men (army garrison soldiers) playing billiards. One man appears to be sitting on the edge of the billiard table. Item unframed.

Discovered in 2003 when new owner, Kenneth Gray, of Tatura, noticed the covering paper peeling away on the wall of a galvanised iron shed on his property. He believes that the shed was bought at the internment camp 4 auction conducted by the Commonwealth Government in the early 1950's and transported to the property which he know owns. The Life and Times of Jim Reilly 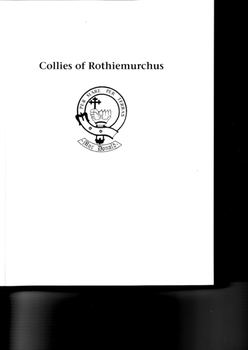 Data gathered by Alex and Elsie Collie after extensive research in both Australia and Scotland. Also visited New Zealand and Canada in their search Bell Bird Cafe Proprietors were Bridge & Nell Myers, early 1920s, later they moved the business into the other building in the photo. Photograph of entrance to German War Cemetery at Tatura. Produced by the CO & officers of the 8th Aust Empl;oyment Co in which Bruno Simon served as a private. Invitation is the anniversary performance of "Sergeant Snow White" revue Margaret Hastie 1938. Debutante portrait. Photo incased in the original card, with inscription on the card: To Marge, With Love Margaret. 1938. 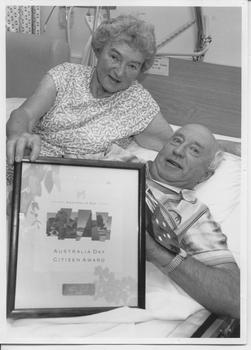 Photograph - Bill and Pearl Craven, Citizens of the Year 1994

Bill and Pearl Craven with their "Australia Day Citizen Award" as Rodney Shire Citizens of the Year 1994. Photo taken at the Goulburn Valley Base Hospital (GVBH). THE MILL HOUSE- Albert Street, Tatura.|Reilly®s Flour Mill operated in Tatura from 1880 to 1965. The mill was demolished in 1966. James Reilly emigrated from County Cork, Ireland, spent two years on a family farm at Fitzroy, another two years at a mill at Kilmore, and then to Murchison to build a mill. Some of his family came to Tatura to build a mill. The house was built for members of the family to live in at various times. After the mill was demolished the house remained as a residence on about the only hill in Tatura. In the late 1970®s, early 1980®s a doctor added several upstairs rooms, then in the late 1990®s the house was used as a bed and breakfast. It is now a private residence