Collections include historical school documentation and memorabilia as well as collections and donations from past teachers and students who served in the armed forces. Brown yearbook with a navy stripe along the lower section of the cover and a WHS logo overlayed above below 1953. KORRUMBEIA is written vertically along the left side Plastic sheet holder containing a purple booklet with an information pamphlet on the 1993 Kelly Curcio memorial service assembly, as well as programs and scripts for the presenters. Yellow yearbook with red ink areal photograph of WTS students standing on the school oval in crowds that spell out WTS FLIGHT 87. One crowd member has a speech bubble reading GERONIMO! and along the bottom of the page is a textbox reading Wangaratta Technical School Album Cream yearbook with a green circle in the middle of the left edge with seven black arrows sticking out of it. In the bottom right corner is green writing reading GERONIMO '73 Gold coloured Bronze medal depicting a winged figure of victory on the front and the words THE GREAT WAR FOR CIVILISATION 1919-1919 surrounded by a laurel wreath. The medal has a double rainbow ribbon.

The medal is colloquially known as 'Wilfred' within the armed forces. It was decided at the end of WWI that each of the allies should each issue their own bronze victory medal with a similar design, similar equivalent wording and identical ribbon. The British medal was designed by W. McMillan. The front depicts a winged classical figure representing victory. Approximately 5.7 million victory medals were issued, making it more exclusive than the British War Medal. The recipient's service number, rank, name and unit was impressed on the rim. Mette-Marit Høiby was an exchange student at Wangaratta High School before being crowned the queen of Norway.

Our queen of Norway by Mary Viscovich white yearbook with a large cartoon drawing of a red and blue superhero-like figure waving,, with a stylised WHS symbol in the chest. Very large black writing behind reads 1995 and smaller writing along the bottom reads WANGARATTA HIGH SCHOOL 1995 MAGAZINE Large colour photo of all Wangaratta Secondary College 1992 year 12 students, with a black board in front reading WANGARATTA SECONDARY COLLEGE YEAR 12 1992. A white box along the bottom bears the WSC logo and the names of the students in the photograph. Mounted on black painted wood. Full page photo of students studying at a table in front of the newly completed senior school, where half the image is colour and the other half is sepia, with the students in the sepia half wearing old early 20th century clothing. Reads Wangaratta High School 2009 in black text.

2009 is the 100th anniversary of Wangaratta High School, and the design of this yearbook commemorates the centenary since Wangaratta Agricultural College first opened its doors. White yearbook with a black and white full page photograph of a cluttered workspace with W.H.S. '85 written in a space. Wooden trophy with a silver plate on the upright section and the base, and a silver statue of a cricket player on the right. Engraved on the metal plates is text reading: Cream yearbook with an orange drawing of a person writing GERONIMO 74 on a wall which has some various other graffiti on it. 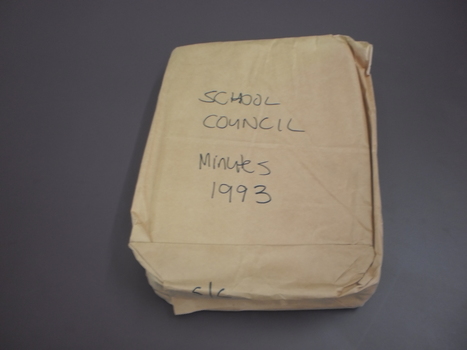 A4 General information folder with a blue header in a plastic pocket giving information to new students. Has a yellow sticky note reading: