Open daily from 10.00 am to 11.00 pm. To view items that are in storage, arrange an appointment with RSL Secretary, Bernie Farley on [email protected] Pewter Tankard (One of Pair)

The pewter tankard is part of a set of two that were presented to Lt. Col. L.G. Stevens of the 4th Light-horse Regiment. The Regiment was part of the Australian Military force in the First World War (WW1). At the end of WW1 the regiment was disbanded and it was re-raised in the 1920's as a part-time unit in the Shire of Corangamite, South Western Victoria. In World War 2 the 4th Light-horse Regiment was mechanised and became the 4th Motor Regiment. Lt.Col. Stevens served in both wars and was discharged in July 1942.. The tankards were probably presented to Lt. Col. Stevens at his retirement from the service.

The set of two pewter mugs is of historic significance because of its connection to WW2 and the AIF. It indicates the relationship between Officers and Men of the regiment. It is of local significance as Lt. Col. Stevens was born and lived in Warrnambool, South Western Victoria.

Inscription on front "PRESENTED TO LIEUT COL L.G. STEVENS ED. By the Officers of the 4th MOTOR REGIMENT 1.5.42 Hallmark on base "Crown & Rose" CAST PEWTER, CREST CROWN & ROSE3 surrounded by FIDE IN LONDON Originally published as Prisoners of War by Penguin Books in 1992. This new edition published by The Five Mile Press Ltd. 2014 Book - SIGNALS. Story of the Australian Corps of Signals 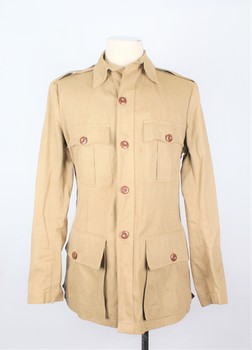 Khaki Drill material in generally very good condition. The jacket is unlined. Pockets on right and left breasts have curved flaps fastened by a single central button. Lower left and right pockets have large 'straight' flaps fastened with a single button. All pockets are sewn onto the outside of the jacket. Loose ends from stitching on button holes and pockets indicates little use. Some staining on collar and spots on the outside of the jacket may be from storage. Belt is missing its buckle which would have been a separate interchangeable item. 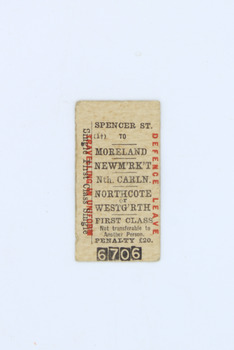 A rectangular light brown paper card with printed ink inscriptions on the front and back.

This ticket is part of a three piece set. There is also an Army Uniform (jacket and trousers) which are associated with this item. The ticket was found within one of the front pocekts of the jacket. There are three chevrons on the sleeve of this jacket which signifies three years of service. The unit patches on the shoulders may denote that the wearer was part of the Army Serice Corps Divisional Unit one. The ticket shows that the serviceman was at some point travelling in uniform on defence leave in a first class carriage from Spencer Street to either Moreland, Newmarket, North Carlton, Northcote or Westgarth.

As an historic train ticket with an association to Victoria and the Army Service Corps this item is of local historic and social significance. Soft Cover. Many photographs in contents 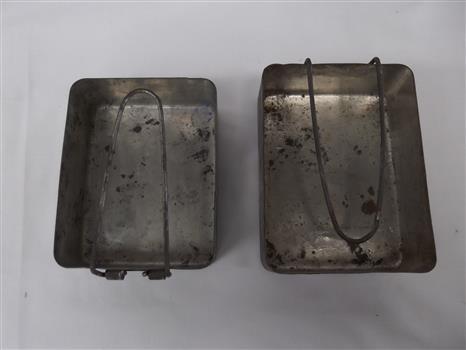 Squire Mess tin in two sections,one fits inside the other for easy storage and to carry. They both have a wire handle which is attached at the ends of the tins and can be folded for storage. This particular tin comes with a cover. This model is constructed of metal and wood. It has a propeller mount on either side of the cockpit with propellers front and back. It has two German crosses on the back and one on either wing.The body of the plane rests on four wheels which sit under the wings with two smaller wheels at the front.There is a gold coloured plaque mounted at the front. It stands on a modern wooden mount,

Trench art was typically made by soldiers from pieces of shell and shrapnel, which would have been collected and refashioned into many different objects ,some being of a functional type such as containers and holders while others such as this are more decorative. The maker of this art piece was Stanley Morgan 6383 who was born at Mepunga which is East of Warrnambool.

This item has significance being a typical example of trench art which has survived over 100 years. Being linked to one of the largest conflicts in which Australia has engaged it has strong historical significance.

On small plaque at front of mount,”Crafted by Trumpeter Stan Morgan France WW1. On the base of the mount on a small sticker,”Mr Lloyd Morgan 19 Mountfield Ave Malvern East Vic 3145 Royal Australian Air Force (RAAF) Peaked Hat - Blue Grey. This uniform was in the period 1966 - 2001 as the primary daily uniform in the office environment. Polyester working dress is approved for wear employed in office or business type environments. The trousers have a belted waist and zip front, with two slant side pockets, money fob pocket below the waist on right side and two rear slit pockets. The trouser leg is pleated at the waist belt in the front.

This item of military uniform was worn by Squadron Leader (SQNLDR) Bernard Farley during his period of Full Time service in the Royal Australian Air Force (RAAF) between 27 January 1976 and 02 March 1997. Bernard joined the RAAF as an Airmen was trained and employed as a Clerk Supply (CLKSPL) between 1996 - 1977. He undertook officer cadet training at the Army Officer Cadet School in 1978 and was commissioned into the Ground Defence Category on the 09 December 1978, where he served for 18 years and rose to the rank of SQNLDR. The standard work of reference on the navies of the World

Compiled & edited by Raymond V.B. BLACKMAN, A.M.I.N.A., A. E. Mar. The Standard work of reference on the navies of the World Distributed by SAMPSON LOW, MARSTON & Co., Ltd., LONDON, W.1. 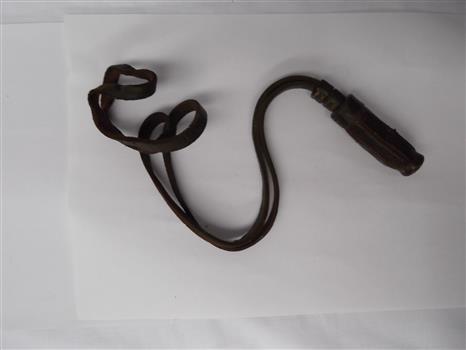 Brown Leather Sword Knott. Has a long thin leather strap which is attached to a cylinder shaped roll at the end which forms what is called a Knott Captured German Postcard illustrating FRICOURT CHATEAU, in ruins. Bob and Harold worked together in 2nd DIV HQ, in the château's basement for several months, late 1916. Then, on a warm night in August 1918, Harold was mortally wounded (gassed) near here, in Fricourt Woods. The photo of German troops at Fricourt Château was apparently discovered in the château after it was retaken and occupied by the Australian 2nd Division. The German photo of troops armed with their stick grenades was possibly also collected by Bob at Fricourt Château.

From 30 Sep and 27 Nov 1916, Bob and Harold Snape worked together in 2nd Division HQ, in the basement of Fricourt Château, The Mortar site assembly has a number of moving parts which all help with the firing of a Mortar. Original Item recovered from possibly Australian Corps HQ, probably between the Armistice, 11 November 1918, and June 1919, when the Staff Sergeant R.O.(Bob) Snape was repatriated. Edited and introduced by Hugh Trevor-Roper Translated from the German by Richard Barry The Story of the 1945 Goebbels Diaries by Peter Stadelmayer Secker & Warburg London: 1978 Book - ON GUARD. With the Volunteer Defence Corps Book - HMS WARSPITE. The Story of a Famous Battleship 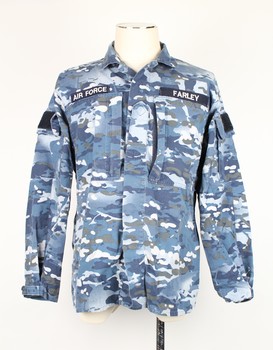 General Purpose Uniform (GPU) shirt in Airforce colours of blue and grey in camouflage pattern. Long sleeve with 6 buttons up the front, two chest pockets with zippered verticle openings along the button seam; two button down pockets on both the left and right shoulder with velcro patches sewn to outside flap for attachment of patches. Above the chest pockets are two patches with embroidered inscriptions in white thread on navy backing. Shirt cuffs have adjustable velcro fasteners.

This shirt is part of a General Purpose Uniform issued by the Australian Airforce to Bernard Farley during service. This uniform type was developed in 2014 and replaced camouflage as the uniform worn during general base duties and in non-warlike environments. Although a camouflage pattern, this design is not intended for use as camouflage.

This item has social significance, as an item of uniform worn by Warrnambool RSL community member and Secretary (2019), Bernard Farley during service with the Australian Airforce. The item is a representative example of current Airforce General Purpose Uniform and is in excellent condition. As a set, the uniform has aesthetic significance in it’s design, incorporating GPU uniform design from the Army alongside the colours and motifs of the Australian Airforce.

Inscription on interior label is worn and illegible, halfway down the tag reads “PM KEYS NO.” Throughout (on shoulder seams, above left pocket and on back of collar) is the Australian Airforce badge/motif which features a circle with the words ‘Royal Australian Air Force', the Imperial Crown, and a Wedge-Tailed Eagle in flight though this detail is inferred not physically visible. Two embroidered patches above the chest pockets read “AIR FORCE” and “FARLEY.” The donor, Staff Sergeant R.O. (Bob) Snape, Reg No 8651, enlisted as a Stretcher Bearer in 1915 but, because of his secretarial skills was employed in HQ positions as soon as he arrived in France and as a stenographer who worked as Confidential Clerk to General Sir John Monash from June to December 1918; and subsequently, for General Sir Talbot Hobbs until June 1919. The map was very likely directly used in the planning of the 1918 battles such as Mont St Quentin.