The Emerald Museum is a local history museum and archives which houses and selectively displays approximately 1600 photographs, 600 memorabilia, documentary records (including contemporary records) and family histories relevant to the economic, social and environmental history of Emerald and district (within postcode 3782). A collection of original ledgers, stock books and catalogues of the renowned Nobelius Nursery provides a link with the heritage park in which the museum is situated. The Museum also houses the Writers of the Dandenongs exhibit, which commemorated well-known Australian literary figures who settled in or wrote about the Dandenongs in the early 20th century. Other major themes include gold discovery in Emerald, timber, horticulture, transport (rail and bullock), and guesthouses. Special themes are developed to reflect current events. The Museum is managed by a Special Committee of the Cardinia Shire Council.

All archives provide a comprehensive history of Emerald from 1858 gold rush then settlement in the area. Collection has examples on local industries namely Nobelius Nursery established in the 1880's through to present day. A history of narrow gauge railways in Victoria 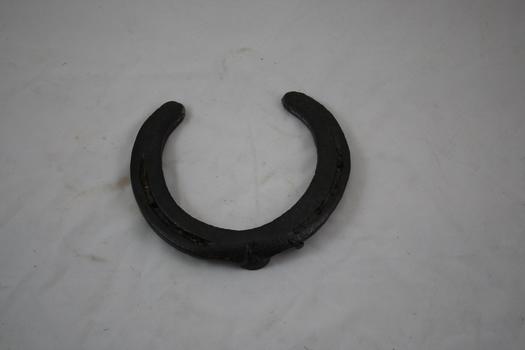 The reports are primarily historically & socially significant for understanding the local football community, they also give some insight into the local families who were regularly involved in the Football League.

has been re-labeled, cover slightly worn 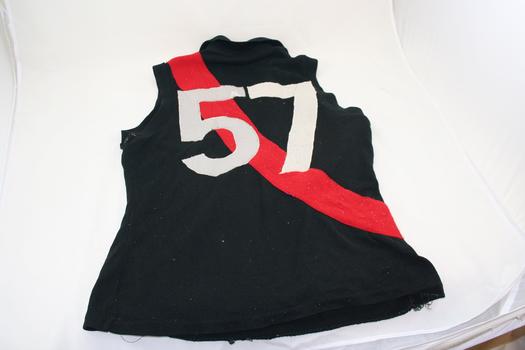 Machine knitted, sleeveless jumper, with a red diagonal strip extending from the left shoulder to the right hip. The stripe is on both the front and back of the jumper. The number 57 is on the back.

Worn by Mick Anzin, during the 1981 winning Grand Final. This style of first aid kit was marketed to local sports clubs, and is socially and historically significant. 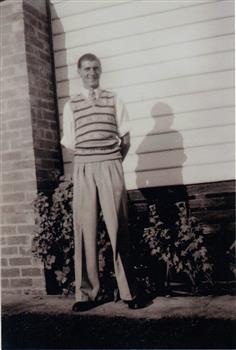 B/W photograph, looking across a stretch of Emerald Lake. Feature in background left might be diving platform.

The Stone family were migrants from Wales, living at the Fisherman's Bend Migrant Hotel around 1960. This photograph was taken on a day trip to Emerald Park Lake.

The photograph shows the state of Emerald Park Lake around 1960. Pencil sketch on cartridge like paper, framed by a wide wooden frame

Dr. Murphy was a popular identity in Emerald and its surrounds.

The sketch is significant because it gives a rough image of Dr. Murphy. After he died, a medical scholarship was created in his name for a young, local, first year undergraduate in Medicine. On brown card: Souvenir - Jenolan Caves sticker on bottom R/H corner Middletons Touring Service Tel: 117 KAT On back of photograph: on 21st March 1923 Miss Louise and I wnt in our Middletons car (a Hudsons Car) this photo was taken at Hartly in front of the old court house and prison. Built by the convicts in 1833 on the way to the Jenolan Caves. This is a Birthday gift from Dear cousin Louie (name to be confirmed)

This item was used in the 20th century to preserve cooked food. Fruit and Vegetables

Showing how everything was home made years ago. Alice May (known as May) Nightingale married Frederick Sparks. They were living in Cranbourne (Lyndhurst) in 1906 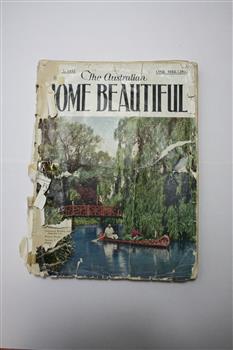 The Australian Home Beautiful was a popular Magazine years ago .

In the May edition there is a local article on a building of importance in Sycamore Ave. Emerald

January 1st 1932 with advertising and Stories The Civilian Service Medal 1939 - 1945 was established in 1994 by the Australian Government. It recognizes the service of civilians who served in Australia during World War 11, in organisations that were subject to military-like arrangements and conditions of service, or arduous circumstances, in support of the war effort. The original medal is missing in the presentation box. The recipient is William George Bennett of the Alice Berry Nursing Home, Kings Rd, Emerald. Pincers for leading large animal by the nose.

Tool made of two pieces of metal with blunt concave jaws that are arranged like the blades of scissors, used for gripping and pulling things. Iron handles 15cm long, with hole cut into the gripping end. The pincers have round, spherical ends for inserting into the nostrils. 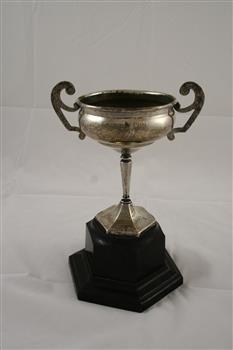 White soft cover booklet with a large drawing of David Mitchell (1901) on the front.

David Mitchell was born near the town of Forfar, Scotland, became an apprentice to a stone mason and builder, then emigrated to Australia in 1853. In Melbourne, he set up a builder's yard in Burnley St, Richmond and later bought Cave Hill Limestone Quarries in Lilydale and manufactured the cement in Richmond. He became Shire President for Lillydale in 1883. Also he established a brickworks in Burnley St, Richmond. He was responsible for building PLC College in East Melbourne, Menzies Hotel, The Exhibition building and Scots Church. Although he was very wealthy in his own right, he is also known as the father of Dame Nellie Melba. Green Catalogue 1915 of Fruit Trees, also Elms, Oaks, Planes, Poplars and other Deciduous and Ornamental Trees. The catalogue contains 5 black and white prints of landscape views of the nursery, plus there are 5 bright colour inserts of individual pears and apples.

This is the twenty fourth catalogue of trees and it contains fruit trees, nut trees, berries and some ornamental trees. Carl Nobelius wrote in his General Remarks that he had one million trees to sell, clean, healthy and pest free. The nurseries were 250 acres in extent and contained two and a half million trees in various stages. His nurseries were at Emerald, Railway Siding and his office half a mile from Emerald Railway Station. He imported new varieties from overseas and the nursery was the largest in the Southern Hemisphere, employing 80 people between 1903 and 1930. Part of the horticultural history of Emerald and the surrounding district. 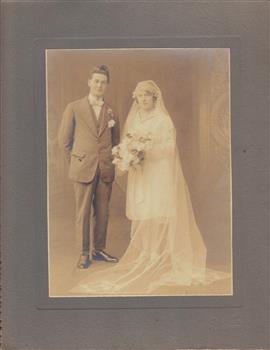 Inscription on Back: To dear Aunt Emma with love from Jack and Winnie Markers Mark: Burlinston Melbourne 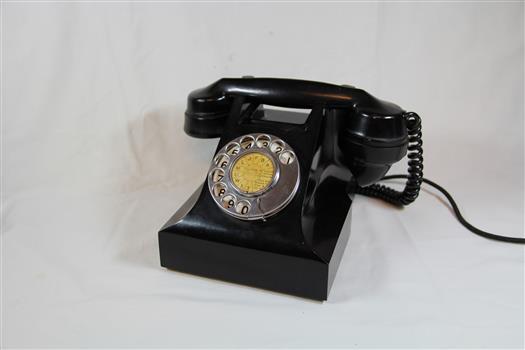 Telephone used in all households as standed issue for the Postmaster General (PMG) from the 1940's.

The reports are primarily historically and socially significant for understating the local football community especially as it names many members of the team. The also give some insight into the local families who were regularly involved with the Emerald Football Club.

Book - Beauty from Ashes A Church Grows From the Bushfires of Ash Wednesday.

The town of Cockatoo was destroyed by fire in 1983. This book tells the story of the building up of the parish of St. Luke's Anglican Church and the building of the Church in the four years following the fires. It is written by Peter Crawford who became the vicar of the Emerald-Cockatoo parish on the outskirts of Melbourne.

Signed by the author Peter Crawford

This item started by Nell Jeffery who handwrote all of the notes and uses accurate botanical names. Minutes includes Treasurer's reports. Guest speakers and the general activities of the Club

This item has historical, social and scientific significance A book in very good condition on the life of Norman McCance. Hard cover.

Inscription in front. Best wishes to all at Emerald Museum. Signed Janet Werkmeister. Postcard/photograph from the Rose Series