This is a Linen Embroidered Supper Cloth with lace edging.

VX48425 Richard H Bromilow served in the AMF during WW2 with 1st Independent Coy as a Transport Driver. His records show as of 01 July 1942 he is missing and presumed dead.

It is presumed that this Supper Cloth has been Embroidered in remembrance of VX 48425 Richard H Bromilow. This hat badge, buttons and ribbons are the originals of someone who was employed by the Corps of Commissionaires.

Around to centre of the hat badge and the buttons 'Corps of Commissionaires Victoria'. 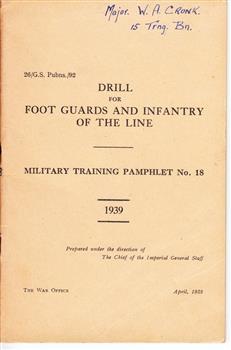 Book - Drill for Foot Guards and Infantry of the Line This is a written and pictorial history of The National War Memorial of Victoria, The Shrine of Remembrance. There are 50 photographs and illustrations included in this Magazine to complement the written history.

This is an original magazine detailing of the history of The National War Memorial of Victoria, The Shrine of Remembrance. Original Black and White and Sepia photographs of the Docking Family.

These photographs are of the Docking Brothers, Edward C, Arthur A and Victor Roy - all served overseas during WW1 and came home. Melville Roy (son of Victor Roy) - served during WW2 and was a POW in Changi. The three brothers were born on Prahan, Victoria but relocated to Western Australia.

These photographs are originals from the Docking Family. This Plaque was made and issued to the NOK of a service person who died during service or as a result of service. The concept of this plaque was began in 1917. There may have been over 1 million plaques made.

This Memorial Plaque has a 'W' on the reverse of the plaque which indicates it could have been made at Woolwich. There is no name in the rectangle provided. This book was at some time in the possession of Capt W.A. Cronk 59th Bn.

This Book would have been used to train Military Personnel in Infantry Training in the early 20th Century. 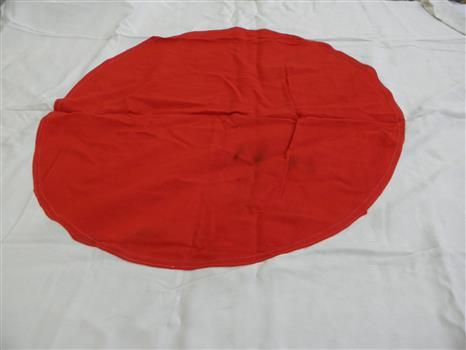 This Flag of Japan appears to have been in the possession of Chief Petty Officer Writer D'Arcy who served on the HMAS Arunta. 142993 H C Foster served with the RAAF during WW2 these medals are the originals that were presented to H C Foster.

These medals are the originals belonging to 142993 H C Foster. Oblong, canvas, buff coloured Sausage Bag, metal rings around the top for a tie to go through - the tie is missing.

35056 Gnr Gavin H Williams served in the AIF during WW1, this is his Sausage Bag.

This is an original Sausage Bag that belonged to 35056 Gnr Gavin H Williams. The Medals are reproductions, there are no markings or names There are three (3) letters from Ormond to Mona that were written whilst Ormond was 'Somewhere in France' in 1916 and one (1) Certificate to Miss M Barker from the Red Cross acknowledging her service during WW1 1914-1919.

These are original letters written in 1916 and an original Red Cross Certificate issued after WW1.

Three (3) Letters four (4) pages from Ormond to Mona written from 'Somewhere in France' on 28 September 1916, 8 October 1916 and 18 November 1916. One (1) Certificate awarded to Miss M Barker. The certificate has been awarded by the Red Cross to Miss Barker for Four years service to the Society during the Great War 1914-1919. Steel blade machete with wooden double sided handle. The handle is attached to the wood with four steel rods. There is an olive green scabbard made of cotton material oil impregnated. The scabbard has a pocket on the front to hold a sharpening stone and has steel on the top opening to keep the opening firm, there is a steel catch for attachment to webbing and a cloth loop with press stud to hold the handle of the machete in place when in the scabbard. There is a cotton fabric loop through the handle.

These machete's were issued to military personnel posted in jungle like conditions.

The machete would have been used by military personnel during WW2 and during the 1950s.

On the handle of the machete MA67. The item number on the scabbard is not readable. The Medals are originals belonging to WX 34557 Harold Allan Green. The documents and the plaque relate to 2146 Pte L W England and provide information to his Service and being Killed in Action at Posieres.

The pages are relating to enquiries from Pte England's family and the Military. There is also a plaque with the documents - In Loving Memory of our dear son and brother, Killed at Poziere July 1916 aged 19. 'A' Company 5th Battalion, AIF. Presented by Mr and Mrs G England and Family. Used by members of the Military to dig trenches and fox holes.

Provides shelter to personnel when in the field. Pith Helmet is khaki colour with khaki puggaree, the puggaree has three folds and sewn on the left hand side of the puggaree is a blue white red colour patch. There is a leather band around the brim of the helmet and across the front visor there is a leather chin strap with metal adjustment buckles there is a ball shaped finial in the top of the hat.

The earliest appearance of these helmets went back as far as 1840 for use in the field and then worn with dress uniform only in the 20th century.

The helmet was part of military uniform from 1840 up until the the mid 20th century.

Handwritten inside the helmet is the name of Sgt. Canr A.E. A white china coffee cup, blue and gold band around the rim

This cup was used in RAF Messes during WW2, This particular cup was brought back to Australia and donated by Mr and Mrs Insley

On the front of the cup a Royal Crown, RAF and a laurel wreath On the bottom of the cup Royal Crown with a lion on top of the crown, Made in England, Royal Doulton England A series of 'Letters' to 431033 LAC Alfred C Heintz. The letters have been photocopied and are contained in a dark blue leather folder that was a gift from the RSL.

431033 LAC Alfred C Heintz with the Air Force during WW2 and these letters have been sent to him from his Family.

This Folder is the original that belonged to 431033 LAC Alfted C Heintz, there are photocopies of the letters inside the Folder.

The front of the folder has the RSL Badge embossed on the front (on two figures on the badge) and inscribed 'With Best Wishes from the Returned Sailors, Soldiers and Airmen's Imperial League of Australia'. This is an original badge An oblong shaped book, yellow cover with white pages. On the front cover a photograph of the author 3/772902 James K Oliver.

This book is an original that was written by 3/772902 James K Oliver covering his experiences as a National Serviceman in the April Intake 1955, with 20th National Service Training Ballation at Puckapunyal. The interest in this picture is the two ex servicemen are wearing the Gallipoli Star. This decoration was approved by King George V to be awarded to Australian and New Zealanders who landed on the Peninsula. After much controversy the medal was not issued. In 1990, however, a private issue of these medals were commissioned and 200 of the medals were given to the surviving Gallipoli veterans to commemorate the 75th anniversary of the landing of the ANZACs as Gallipoli.

This photograph is of two veterans and their attendants at the Gallipoli Memorial Service 1990. The ex-serviceman are being applauded as they walk through the crowd.

The framing was completed at Northcote Picture Frames. Hand written on the back of the photo 1. HMAS Quickmatch, HMAS Quiberon, Air Sea Rescue. This is the original Medal of VX145971 Capt H F Clark. Capt Clark served with the AMF BCOF/Japan.

This is the original Medal.

On the circumference of the Medal VX 145971Capt H F Clark AMF.

The Jacket has no name in it. The Trousers were issued to a person named SERPELL. Round medallion, bronze in colour, crown on top and ANZAC inscribed on the bottom of medallion. There is a lapel badge "A". The medallion is cast in bronze and the lapel badge will be a metal of bronze colour.

This medallion was issued to surviving members of the Defence Force who served on the Gallipoli Peninsula, or in direct support. NOK or other entitled persons can aapply to receive the medallion on behalf of the relatives.

The medallion is to be issued to ANZACs who were at Gallipoli between 15 April 1915 and the final date of evacuation in January 1916.

Obverse of medallion depicts Simpson and his Donkey, lower border is a laurel wreath above the word ANZAC. The reverse shows a map in relief of Australia and New Zealand superimposed by the Southern Cross the lower half is bordered by the New Zealand fern leaves. Inscribed J.C. Martin. A brown colour Photograph Album, pages full of photographs and Discharge and Military Papers relating to VX46562 N J Richmond. This is his story - the family retain posession of the Album.

This history has been compiled by Norman John Richmonds family, the documents and photographs are originals as kept by Mr Richmond. A colour photograph of HMAS Australia (D84) in a gold colour frame.

There are six (6) small photographs of the HMAS Australia during its period at sea at Leyte Gulf and Lingayen 1944-1945. There is a history of the dates/time the ship was attacked and the personnel losses per attack. The photograph has been signed by D E Shinkfield.