The Hume Civic Collection comprises artworks, photographs, objects and records related to the broad history and culture of the Hume region. Within this, the George Evans Collection is a significant holding of over 5500 objects and photographs, representing the rich social heritage of Sunbury.

The Hume Civic Collection contains records and artefacts dating back to the establishment of the Shire of Bulla in 1956.
Hume City Council (established 1994) acknowledges the importance of its cultural heritage and maintains a growing collection of artworks and historical items that reflect the artistic, social and political aspirations of the local community.

The collection (formally established in 1987) comprises artworks and heritage items including: A sepia print of a group of 21 men standing at attention outside the newsagency in Brook Street, Sunbury. Three men are holding wreaths. There are two drummers and one is in uniform. There are two dogs near the drummers. Some men are wearing medals.

The photograph was probably taken on either Anzac Day or Remembrance Day, 11 November because some men are wearing medals and others are holding wreaths. A coloured photograph of 'Arcloney' a Federation style house with a red terracotta gable roof and cream rendered walls. The wooden frames around the windows have been painted dark green and cream. There is a glassed conservatory to the rear of the building.

The double storey Federation style house was built in 1911 for Dr. William Cooke Faulkner who was the local doctor until his death in 1922. It was then bought by the local state school headmaster, John James Rogers, for over 6,500 pounds. In the early 1940s a grazier, Eric George Whiteside, bought the property. Bill Landeryou, MLC lived in the house until the late 1980s. He had purchased it from the Campbell family. A black and white photograph of the Prime Minister, Hon. John Gorton standing on a dais and addressing a gathering of people. 11 people are in the official party seated, in the background. A floral arrangement has been placed across the front of the dais.

The photograph was taken at the official opening of the Melbourne Airport at Tullamarine. The Prime Minister of the day, the Hon. John Gorton was the official guest at the opening. The photo of St Mary's Anglican Church has been taken from Stawell Street, Sunbury. There is a picket fence along the street line and trees in the churchyard and along the roadway. Unmounted black and white.

The original photo is part of an album taken by W.Walls, the front page of which is inscribed "The Hill/Sunbury/April 1897". Whilst most of the photos relate to the environs of the asylum, there are others taken around Sunbury and elsewhere. The original album is held as part of the Mental health Collection. During 2000 this was transferred from Mont Park to the Royal Melbourne Hospital. 'Glenara' is situated along the Deep Creek at Bulla and was built on an original government grant of land by Walter Clark. His fourth child, Alistair, spent much of his life there and with the help of his gardener, W.Peers, gained world recognition for introducing 150 new rose species which included the Black Boy and Lorraine Lee. He was also founder of the Moonee Valley Racing Club.

A sepia photograph of an outdoor meeting which took place on the lawns outside the new Shire Offices. The photograph has been constructed from three photographs and gives a panoramic view of the crowd.

This photograph was taken at the opening of the new Shire of Bulla Offices in Macedon Street in 1966. A honey coloured wooden coffee grinder with a metal lid and a red handle.

This object was used for grinding coffee beans. Originally purchased by Susan Barnett for $2.50 in an 'OP' shop. A black and white photograph of a two arched bluestone bridge over a creek. A wooden post and rail fence painted white has been constructed in front of the original stone wall of the bridge.

The Macedon Street Bridge over Jacksons Creek is important because it was built on one of Victoria's first important roads. It replaced a smaller lighter bridge in 1857 and continued to be used until the early 1970s. A mounted sepia photograph of a group of men and one woman standing on a construction site and in front of a foundation stone. There are 22 men in the photograph with 7 of them dressed in clerical attire. The other men are wearing dark suits. Cream mounting 1.5cm x 2.5 cm.

The photo was taken to record the laying of the foundation stone of St. Andrew's Presbyterian Church (now St. Andrew's Uniting Church) Sunbury 1904. A black and white photograph of a DC2 aircraft on the runway at Essendon Airport c.1937. There is a group of people in the foreground. In the background there is an aviation fuel truck. A black and white photograph of a Sunbury Fire truck with a driver and four young identified men standing at the back.

The Sunbury Fire Station began in...... 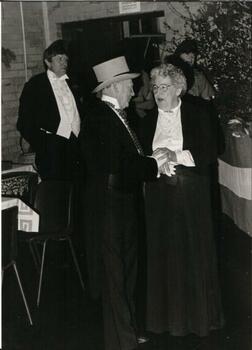 A black and white photograph of a lady and man in colonial dress talking.

The photograph was taken at the Colonial Ball which was held to celebrate the 150th Anniversary of white settlement in Sunbury. The lady photographed is Hilda Baird, who was one of Sunbury's oldest residents at the time. A coloured photograph of a ruined and roofless bluestone building on a roadside.

The ruined bluestone building was the former Bulla Post Office and general store which was gutted by fire in1989. The building was demolished after the fire and the post office was relocated to a service station about 1km away.

Until it was burnt down, the post office and general store was an important hub in the small town for local residents. A high wooden foot bridge spans a river with a man standing in the foreground of the picture. Unmounted black and white

The original photo is part of an album taken by W.Walls, the front page of which is inscribed "The Hill/Sunbury/April 1897". Whilst most of the photos relate to the environs of the asylum, there are others taken around Sunbury and elsewhere. The original album is held as part of the Mental health Collection. During 2000 this was transferred from Mont Park to the Royal Melbourne Hospital. A coloured photograph of a disused building. The walls are timber with a corrugated iron roof. Various items of rubble are scattered around the outside of the building and the remains of a 40 gallon drum is in the foreground. Some native trees are growing on either side of the building.

The disused farm building is part of a larger farm complex in the Bulla area. A coloured photograph of Sunbury Township looking west from above Jacksons Creek and Goonawarra Winery. Macedon Street can be seen in the middle distance and Mt. Holden and Burke Hill are across the skyline.

The photograph although recently taken shows the original settled area in Sunbury, which included Goonawarra Vineyard and Macedon Street which was once the business centre of Sunbury township before the railway was established. Five men are seated and one man is standing in front of a bluestone building which has an open door and five windows. Unmounted - black and white.

The original photo is part of an album taken by W.Walls, the front page of which is inscribed "The Hill/Sunbury/April 1897". Whilst most of the photos relate to the environs of the asylum, there are others taken around Sunbury and elsewhere. The original album is held as part of the Mental Health Collection. During 2000 this was transferred from Mont Park to the Royal Melbourne Hospital. Mounted b/w photograph of the store of J. Gilchrist and Son, Evans Street, Sunbury with horse and cart and two gentlemen. A black and white copy of a group of women.

This is a black and white photograph of a group of women who were members of the Country Women's Association. The original photograph was taken in the Sunbury Memorial Hall. A coloured photograph of a grey rendered building, along a roadside, which has been damaged by fire wqith a temporary fence surrounding the building.

he building which has been damaged by fire is the former Diggers Rest Hotel which was the only surviving hotel along the Calder Highway between the towns of Keilor and Gisborne a distance of approx. 32kms A black and white photograph of a demolished bakery. Two men standing above the oven on the RHS with a heap of rubble in the foreground. 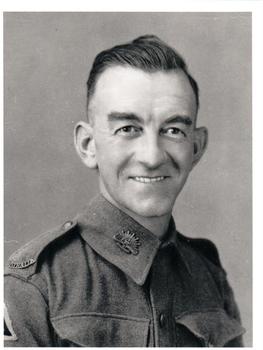 A head and shoulders photograph of a soldier, possibly William McGregor, from Bulla. He is not wearing a hat. The 'Australia' badge is on the right shoulder and the AIF badge on the right collar. Thought to be used for measuring liquids in retail premises by Council Inspectors of Weights & Measures Department of Shire of Bulla and donated by Hume Council when amalagmation of Councils took place. 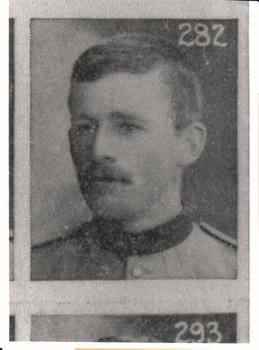 This is a copy of a photograph of a soldier.

This is a photograph of Prtivate William Hanlen from Tullamarine No. 1160, 5th Victorian Mounted Rifles Contingent. he was one of several local enlistments for the Boer War in South Africa. In June 1901 he was listed as being dangerously ill

Written on the back: PTE.W.S. HANDLEN A coloured photograph of the wooden ceiling and stone walls of part of a building.

The wooden shingle roof is part of the roof of Waylett's Cottage at Greenvale in Somerton Road. A green, red and gold tin used to sell and store treacle. Two stick of sugar cane decorate the front and the back of the round tin. The tin lid on the top of the tin needs to be levered open. The tin's capacity is 2 pounds. The word 'treacle' is written in bold red capital letters.

The tins were used by the Colonial Sugar Refining Co. to store and sell treacle which is a by-product of cane sugar and molasses. The tin is labelled with the imperial pound measurement so it preceded metric weights and measures. A black and white photo of entries in the preserves and cakes section in the foreground. There are flower entries on the side and vegetables in the background. Two men are standing to the side.

The Sunbury Flower show is held annually and is organised by St. Andrew's Presbyterian Church. It is held in the Memorial Hall.

A coloured panoramic view of the construction of the duplication of the Calder Highway in the vicinity of Plumpton Road. It is unmounted.

This photograph is of the duplication of the Calder Highway at Diggers Rest in the vicinity of Plumpton Road.