Heidelberg Repatriation Hospital commenced on 13 March 1941, and was known as the 115th Heidelberg Military Hospital. The hospital was initially operated by the Army, and on site between 1942 and 1947 was 6th RAAF Hospital.

The hospital was transferred into the Victorian health system on 1 January 1995 with Heidelberg Repatriation Hospital and Austin Hospital amalgamating on 1 April 1995 to become Austin & Repatriation Medical Centre.

As from 30 April 2003 a name variation, approved by the Victorian Government, saw the Austin & Repatriation Medical Centre name replaced by Austin Health.

Within the hospital are many plaques and gallery spaces, including in the Outpatient Department where memorabilia, the Heidelberg Repatriation Hospital tapestry and the flag of the 2/4th AGH are displayed.

Memorabilia and Gallery space are located in the Veteran Liaison Office and older Veterans Psychiatry Program area. The Remembrance Garden includes many memorial plaques and the duckboard stained glass.

Heritage work is never finished; additional plaques are being planned as well as enhancements to gardens, displays, memorabilia and documentation of historical records and items.

As usual - great work from the Veterans Liaison Department who are keeoping alive the spuirit of our veterans at Heidelberg Repat. 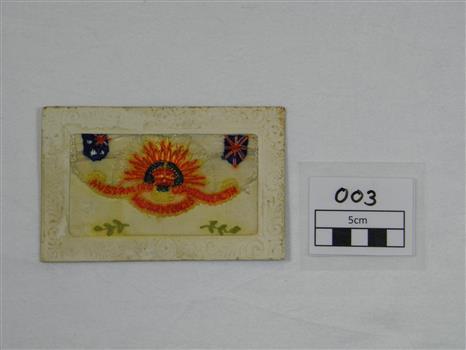 Commonplace postcard sent by Frank O Brien World War One veteran and former patient of the repat, to his father from France during World Ward One. 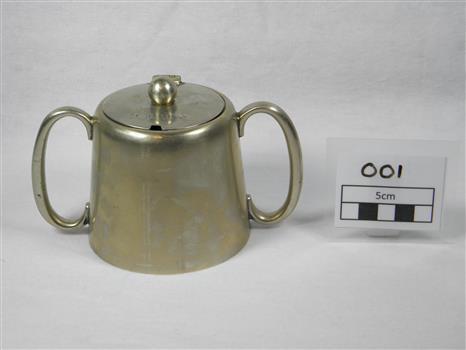 Stainless steel sugar bowl with single hinge lid with single knob and two oval like handles, on opposite sides, Bell like in shape. Cutout in lid for spoon location is representative of a rectangular shape.

Used in the hospital setting as general kitchen ware. For patients and staff in dining rooms. Stainless steel selected due to robust nature. Reflects an earlier era before individual serves, bulk sugar being the only availability.

Significant as it is reflective of an earlier era and a somewhat expensive and decorative piece that is no longer in use in society. 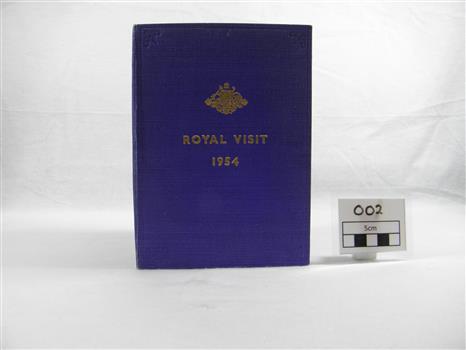 Blue cardboard folder of 4 pages containing 1 photo and inscription. Photo is of Queen Elizabeth sitting down and Prince Phillip standing to the left of her in front of a fireplace.

Handed out to patients and visitors to commemorate the visit of her Royal Highness Queen Elizabeth II And Prince Phillip to Victoria in 1954 and in particular the Heidelberg Repatriation Hospital. This brought much excitement to the patients at Heidelberg.

Page 1 shows the Commonwealth Emblem with the words "Royal Visit 1954" inscribed under it. Page 2 has the inscription " Memento of the Visit of Her Majesty and his Royal Highness The Duke of Edinburgh to Victoria 24th February, 1954 to 9th March, 1954 presented by the Repatriation Commission" over a crown and the letters EIIR