Greetings, Could you please add to opening hours Monday to wednesday 1pm to 4pm Regards... Alistair Green and white speckled, enamelled metal candlestick holder. Rounded square base with a handle on one corner. In the middle of the base is the metal candle holder (same colour), also shaped rounded, square. Quite rusty on edges.

Wooden croquet mallet has round head with brass plate under flat base and brass rims screwed on ends. Leather grip on top half of long wooden handle.

Handwritten on top of handle "E.M.G.". Printed on label on base "M. GUENTHER". Printed on handle "BUBSBEY'S LEATHER / HANDLE".

Printed on paper in silver lettering "CHRIST IS THE HEAD / OF THIS HOUSE / THE UNSEEN GUEST / AT EVERY MEAL / THE SILENT LISTENER / TO EVERY CONVERSATION". Handwritten in pencil in bottom right hand corner "TAKEN / FROM HOME OF / T. ADKIN.

Handwritten on base. "WEPPNER". Illegible inscription on head.

Red framed penny-farthing bicycle - gold painted metal seat, small wheel at back with large one at front. Has copper handle bar with wooden knobs at ends

Restored by the shire workshop Belonged to, and used in, the Numurkah Court House before it was closed

Numurkah Special Jurors in Use

Hinged wooden box used for draughts board when opened. Inside are a number of red, black and white draughts pieces and a piece of wood with holes and pegs used for scoring. Victorian Railway Guard Hat, Navy cloth with black face brim. Has black band around the base of the hat. Red interior lined 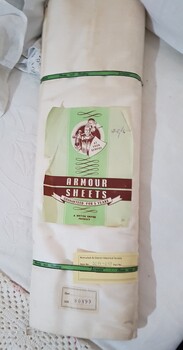 Old newspapers and other items

The Treacy sisters ran a bookshop in Melville St. They collected a range of items over the years. Found in an old shed, Invergordon 1. Cylinder shaped tin with lids on both ends - used for cooking nutloaf. The top lid is removable and has 9 perforated holes. There is label on the side which has been added for display purposes (see below) 2. Centenary Certificate from Willoware to Thomas O'Sullivan 3. Willow Centenary book 1887-1987 and photocopy pages of Willowware history shoe-shaped wood with metal spring inserted in the middle. Yellow ub colour except for an area of black around the top of the shoe Camera used by the Humphries family in the 1960's

Instamatic 133 Camera, Kodak (Made in England) Hard-covered book with children's stories and illustrations inside (printed 1903) Title: The Girls Own Annual (Please note: quite fragile) Red and black coloured tin steam locomotive, with gold lining. Two small and three large tin wheels on either side. Wind-up key on one side. Wind-up mechanism doesn't work

Gold printed number: 659 on both sides This ammunition bag was used by Harry Mitchell (son of Lindsay Mitchell) at the Bendigo Rifle Club in 1959, the bag was designed to hold 303 riffle bullets used in target shooting or could hold 7 cartridges for a shotgun. The Gladstone bag was very popular in the 1940/50 era, it fitted on the handlebars of a bicycle and it was used by footballers and sportsmen. A couple bottles of beer would fit comfortably in the bag and was.used to take beer home after the hotels closed at 6pm. These two articles were donated by Lindsay Mitchell to the Numurkah Historical Society. The Sunbeam Mixmaster belonged by Marjory Welch, Nana of Margaret Mitchell and would have been used in late 1930 and during 1940's. It was painted and used by Linda Mitchell, (great great grand daughter) when at universitv in 1987 White Sunbeam Mixmaster was purchased by Margaret Mitchell 1965. lt was her first mixmaster after she was married in 1964 The bread bins. The green and white belonged to Mary Mitchell (Lindsay Mitchell's Mother) The colourful bread bin belonged to Lorna Welch (Margaret Mitchell's Mother) Victorian Railways Handbook on the Locomotive

Part of a collection from the closed Numurkah Railway Station

Title as above / Issued for the guidance of enginemen in the description, maintenance and economical operation of the locomotive 1952