The society was formed in 1963 as a centre for local research into the early history of the town and it's pioneer families. From modest beginnings, the organisation has grown to a membership of more than 120, with a much wider range of interests.

In 1992 the society was able to negotiate the lease of the historic Courthouse building in Gipps Street, Port Fairy, which was renamed The History Centre we have now decided to rename the building “Port Fairy Historical Society Museum and Archives to better describe our activities.

The Courthouse is one of over fifty buildings in Port Fairy classified by the National Trust as essential to the heritage of Australia and which must be preserved. It was built in 1859, with the portico added in 1869, and a further three rooms at the rear in 1874, to make the building as it is today. At the time of construction, it was the only Courthouse in the Western District of Victoria, and housed sittings of the Supreme Court and County Courts as well as General Sessions. It remained in use until 1988, when its last function, as a Licensing Court, was transferred to Warrnambool.

Much of the work of the society involves the development of the Courthouse as a museum and archives, and includes participation in the Museum Accreditation Program with which we have been accredited since 1998. The main courtroom houses a display of the original court furniture, with figures in costume. Five other rooms contain both permanent and temporary exhibitions on themes such as the early pioneers of the district, the whaling era in Port Fairy, local shipping and wrecks along the coast.

2pm to 5pm Wednesday and Saturday. Sunday 10.30am to 12.30pm winter hours 2 pm to 4 pm Saturdays only (July, August) This year we will be open during Folk Festival details will follow closer to the time

Very early settlement of Victoria, provided one of the first members of the Victorian parliament, one of a very few settlements based on Special Surveys

Represents coastline at South Beach in 1903 Leura homestead owned by Dick and Mary Fry. They appear on the verandah in this photo 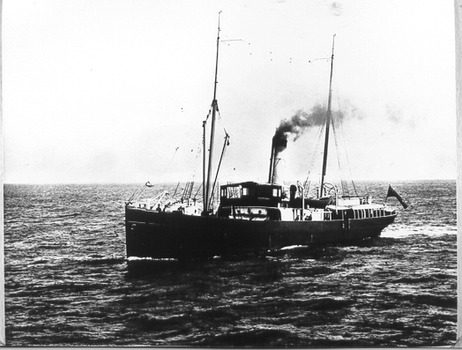 Photograph - On the common (near South Beach) 1926 Dilly bag woven from grasses. Woven in one piece with decoration near bottom and around top. Plaited handle

Hearsay-- Item was given to a white lady as a gift

The mining company in Seddonville New Zealand purchased a small steamer, SS Lawrence, to transport coal, but in 1891 the vessel was wrecked at the mouth of the Mōkihinui river. The remains of the ship can sometimes be seen today at low tide on the beach on the south side of the Mōkihinui River mouth.