Following the rush for gold at the Nine Mile a Public Room was built by public subscription in 1856 and opened in 1857 at the height of the gold rush at the Nine Mile (now known as Stanley). A meeting at the Public Room in 1863 elected a committee of ten men to establish a library and a librarian was appointed. This earlier wooden building was destroyed by fire in the late 1860's and the present brick building replaced it on the same site and was opened 1874. It is believed much of the book collection was salvaged from this fire. In 1891 an additional building was added to the rear of the Main Room, this is the building as it exists today.
From 1863 until the 1970’s the Stanley Athenaeum was a lending library and now houses a collection of historic books, the Geoff Craig Local History collection and community archives that are available for reading and research. The Friends of the Athenaeum hold regular temporary exhibitions informed by the collection the Athenaeum continues to have a vital role as the centre of many Stanley community events. It is a small venue and has been a regular meeting place for community groups over the years, including the the Country Women's Association, Stanley New Year's Day Committee, Red Cross and CFA. Currently it is used regularly by Stanley Recreation Reserve Committee, Stanley Cemetery Trust , Stanley LandCare, Stanley Artists and the Stanley Hall and Athenaeum Committee. It has always been a meeting place for small social functions, fundraising events, exhibitions and public meetings.

A donation is appreciated

Stanley’s Athenaeum is highly significant for a number of reasons. As a result of the integrity and the intactness of the collection, the library provides an opportunity to see how an athenaeum looked and operated for nearly 150 years while also revealing the evolving community it continually served. The rareness of some of the books further highlights its significance and importance not only within Stanley and its surrounding towns, but also throughout Victoria. Due to the large subject matter the library covers, especially pertaining to local history, its interpretive potential is huge and will not only be stemmed by decisions made governing its use and function but also by the imagination and energy of the committee overseeing it.
Laura Donati, Significance Assessment Report 2010 Street scene, view down Wallace Street towards the Star Hotel, shops and a man with a horse and cart with apron and a small boy Used for lodge meetings and for community events and celebrations

This building was removed from the site in 1979 Made of hardwood. It is constructed to be opened by a pair of hinged doors. It has a carved additional piece affixed to the top of the honour board. On each of the doors are inscribed members of the organisation. The main panel has a decorative mission statement of the order and is behind glass Taken at Stanley about 1900 in a local bush setting. There are 3 sets of couples, 2 men and 4 women. Picnics were a popular pastime, the group are drinking tea, there is the basket, the billy to boil the water, kettle and cups and saucers for a cup of tea 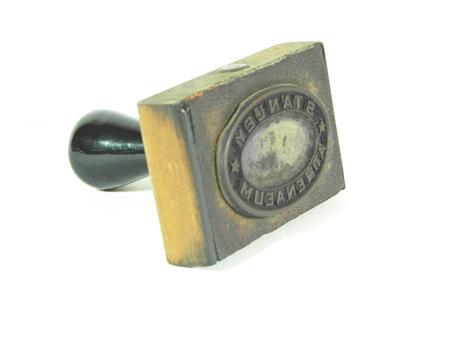 Inscribed relief in elliptical shape with words and stars in reverse. "Stanley Athenaeum" This solid box has a dark purple gold & red design. There is an ornate latch & handle on the lid, and a pair of handles each end. Internal cash box has a black metal removable insert box of 3 compartments. When sitting inside cash box there is space underneath for notes/papers. There is a small lay lock on the front panel. No key was found for the box. Found in safe which has been in the building for over 100 years. Documents found in the safe indicate that it was used by the trustees of the Foresters, Stanley

That the object was used by Stanley groups/ residents This bank passbook. Tells the story of the finances of the Trustees of the early 1900s 'Stanley Foresters', It also is a reflection of the social history of the groups that existed in Stanley at the turn of the 20th century, and the groups who met at the Stanley Athenaeum. The Athenaeum also holds the ornate wooden Stanley Foresters memorial board.