The Archives has extensive material (Methodist, Presbyterian, Congregational and Uniting Church) stored off site and a Reference Library which is on site. The Archives are financed by the Synod of Victoria and Tasmania and staffed by an Archivist and volunteers. The Archives are part of the Uniting Church's national network of archives and linked with UCA Historical Society (VIC) in Lectures and displays. Research is undertaken for a fee.

We have a fairly complete Methodist collection with significant holdings of Congregational and Presbyterian material. We also have a collection of Uniting Church Archives at State and local level. Communion set used in The Wesleyan Jubilee Church Toorak Church which was built in 1877. The church was illegally demolish by developers in 1986. Seal/stamp black cast-iron embossing machine with ornate gold and red decoration and a turned wooden handle. The seal in the machine is that of the Wesleyan Church of Victoria Property Trust. Engraved silver teapot with inscription with ivory knob on lid.

"Presented to Mrs Williams by the congregation of St Alban's as a token of esteem rendered as organist. Oct 28th 1889" Round stainless steel communion tray with pattern and engraved wording in the middle. Circular communion tray with cartouche edge of grapes. Engraved inscription at the centre. Silver trowel with polished wooden handle. Trowel decorated around the edges and with an inscription.

Commemorative trowel from Wesley Church St Kilda, 22 October 1857. Alexander Fraser (1802-1888), businessman and politician. Fraser lived at St Kilda and in 1857 was elected to its first Municipal Council; in 1859 he became chairman and mayor in 1864-65. An active churchman, he held most important offices in the Wesleyan Church and for thirty years was treasurer of the supernumerary fund, which he helped Rev. Daniel Draper to found. Dour and pious, Fraser was conscientious in fulfilling his political duties. He presided at numerous meetings and laid countless foundation stones. Presented to John Thompson Esq on the occasion of laying a Memorial Stone of Boundary Street Congregational Mission Church Southport. 23rd May 1890. Presented to Wm Dods Esqre on the occasion of his laying the foundation stone of the Free Presbyterian Church Brunswick 2nd May 1865, EPNS trowel with a turned wooden handle in black leather box with white satin lining and black velvet base. 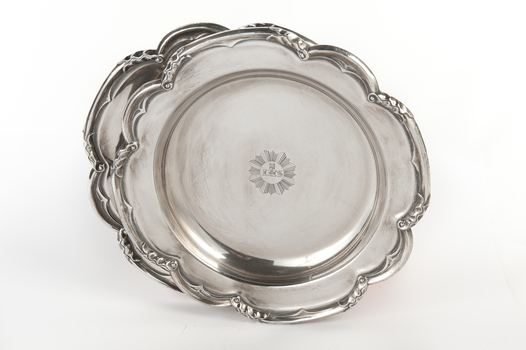 Engraved silver commemorative trowel in the base of a red leather case with blue velvet lining.

"Present to the Rev. James Clow First Moderator of the general assembly of the Presbyterian Church of Victoria in the commemoration of laying the Foundation stone of the First Presbyterian Church erected at Emerald Hill. Revd. D. Macdonald. Minister 1st November 1859" "Presented to F. J. Cato Esq by his Fellow Trustees on the occasion of the laying of the Foundation Stone of the South Camberwell Methodist Church 7th June 1930" "Presented to Deaconess I. M Boughen on the occasion of the laying of the foundation stone St Marks Presbyterian Church Hall Kindergarden Jordanville 6-4-1957" Commemorative engraved silver trowel in a black leather box with a blue silk and velvet lining. Trowel is decorated and has an inscription and hallmark on the front. It has plain bone handle.

"Presented to Mrs S.G.King on the occasion on the laying of the memorial stone of the Hotham Hill Wesleyan Church Dec 16th 1872" "Presented to Fred J. Cato Esq by the builders and trustees of the Eltham Methodist Sunday School Oct 3rd 1931 Jude 2" "This trowel was used by Rev. Professor Norman Lede M.A., B.D. to lay the Foundation Stone of the Deepdene Methodist Church 25-2-57" S026.1 Black leather oblong box with a blue velvet and satin lining containing S026.2 a bone handled silver trowel which has decorative etching around its edge and an engraved inscription. 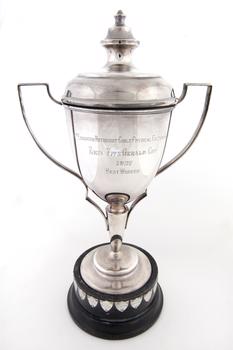 Small silver plate trophy with a handle on bakelite/plastic base. Ticket attached to one handle with gold coloured tape.