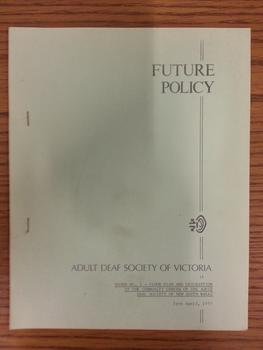 Paper No.3 Floor Plan and Description of the Community Centre of the Adult Deaf Society of New South Wales produced 26th April 1977. Alan John Ely (known as John) was born in Greensborough and was associated with the Greensborough Football Club from an early age. Includes photographs of him as mascot and later trainer with GFC and a selection of his membership tickets, 1949, 1950 and 1958. Information collated by Marilyn Smith in 2019. Barrel sling, made from hemp and used for hoisting barrels onto ships. A man is standing near a clothes line with a table and washtub nearby and a pail is on the ground. There are two outdoor toilets in the background on the right hand side. Unmounted black and white

The original photo is part of an album taken by W.Walls, the front page of which is inscribed "The Hill/Sunbury/April 1897". Whilst most of the photos relate to the environs of the asylum, there are others taken around Sunbury and elsewhere. The original album is held as part of the Mental Health Collection. During 2000 this was transferred from Mont Park to the Royal Melbourne Hospital. 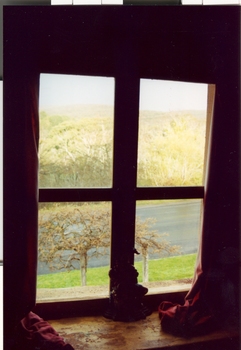 Rev. Alistair Macrae, born 1950. Macrae was ordained in 1984 and served in rural, regional and inner city congregations in Victoria, at Mt Beauty, Portland and West Brunswick. He served as Moderator of the Synod of Victoria and Tasmania (2000–2003) and as Executive Director of the Uniting Church Centre for Theology and Ministry (2004–2009) in that synod. He was a member of the board of Wesley Mission Melbourne and chaired its social policy committee. Macrae was an inaugural member of the Victorian State Government's Community Support Fund and served on the advisory committee of the Community Alcohol Action network of the Australian Drug Foundation. Macrae became President of the UCA in July 2009, at the 12th Assembly. In September 2013 Macrae commenced as Minister of Wesley Uniting Church, Lonsdale Street, Melbourne. Medallion, brass commemorating the coronation of their Majesties, King George VI and Queen Elizabeth, May 12 1937. Ladies medium heeled shoes with yellow and white "reptile-skinned" pattern. Shoes covers toes, side and ankle only. Stored in shoe-box the battle of maryang san, On back - "R.A.F. aircrew escape map in World War II, printed on silk, carried in trousers knee pocket, and used with compass built into brass button (left-hand thread). The object was to set the aviator in the right direction for ne 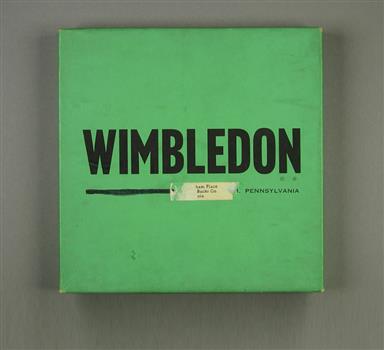 Conversion table of pounds and ounces to kilograms

Framed chart showing the conversion of ounces and pounds to kilograms This item is part of the Federation University Art Collection. The Art Collection features over 1000 works and was listed as a 'Ballarat Treasure' in 2007. Black and white bound photocopy of the 1988 yearbook featuring a full page drawing of a brick wall spray painted with the words THAT WAZ '88'. Near the bottom of the drawing is a girl with a marker pen, paint tins and a stepladder These are folding post cards with scenes of Warrnambool. One has a kangaroo and a bush landscape on the front cover and one has seven kookaburras and a gum tree on the cover. There are 15 of the same black and white photographs in each (taken about the 1920s). The covers are buff-coloured with a space on the front cover to write and address and affix a stamp.

Folding post cards were popular as tourist souvenir of visits to places in Australia throughout the 20th century. Many thousands of the same photographs were reproduced and the Warrnambool and District Historical Society has several examples of these photographs.

These folding post cards are kept as examples of the souvenirs tourists bought in the early and mid 20th century and the photographs themselves give a good indication of what Warrrnamool and district looked like at the time. The photographs also indicate what were considered at the time to be tourist spots worth a visit and a photo. Hugh Jeffrey attended the Melbourne Conservatorium of Music at Melbourne University, graduating in 1940. This examination pin was given to him in September 1933. It is a round copper badge with gold coloured filigree running around the outer edge. Inset into the shield is an Australian coat-of-arms granted by King George V, with a white and blue torse supported by a kangaroo and emu on a grassy field. It features the Commonwealth Star on top, and the motto "Advance Australia" underneath. It is engraved with "University Examination" acoss the top, with "won by Hugh Jeffries sic Sept. 1933" acoss the bottom. It features a loop on the top with a short fine chain and safety pin. Slovenians love Shrovetide carnivals. People come dressed in costumes and masks, dance, select the best masks and are preparing for the Lent