Photographs of the Avenue of Honour in Cherry Street Macleod. Established in 1919 as a memorial to service men and women who gave their lives in World War 1, the Avenue is a single row of sugar gums, the former Mont Park hospital grounds are adjacent. These photographs show the plaque. 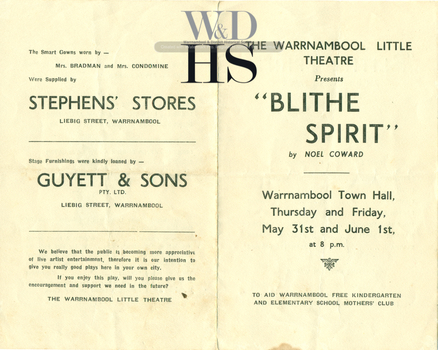 This is a sheet of cream coloured paper folded in two to make four pages and the pages contain black printing and two advertisements.

This programme is retained as a memento of the Warrnambool Little Theatre production in the mid 20th century. Digital copy of advertisement from booklet.

A clear glass bottle which has a broken top. The bottle is seamed.

Dross Drossou established a cordial factory in Orbost in the 1930s. He sold his cordial manufacturing business to Phillips and Stone, a Bairnsdale company, in 1948. Glass bottles were refillable until the 1960s, creating a demand for their collection and onsale back to beverage manufacturers via ‘bottle merchants’. A deposit on the bottles was added to all sales as they left the factory. The returned bottles were washed and the old label removed. The inside was cleaned by pushing the bottle onto a revolving brush. The reusing of the bottles went on until the bottle was broken or the top became chipped.

This bottle is an example of a product manufactured by a local industry which no longer exists. This plan is of great significance to the local history of Warrnambool, in particular the Breakwater and its impact on Warrnambool's maritime and trade history. The plan shows the existing jetties at the Port of Warrnambool, plus the partially erected Breakwater and proposed works to the Breakwater by both the Borough of Warrnambool Surveyor and Sir John Coode. The plan was signed 28th February 1879 by Sir John Coode. The legend at the bottom left describes the existing works and the proposed works. The Warrnambool Breakwater Sir John Coode was a British harbour engineer. He was brought to Melbourne by the Melbourne Harbour Trust to advise on works to improve the Port of Melbourne. The Victorian Government commissioned him to present a plan to complete the Warrnambool Breakwater. His original plan was too expensive so he prepared a revised plan for a shorter structure. The work was completed in 1890. The construction proved to be too short to protect adequately from the weather and didn't allow enough depth for larger vessels to come into port. The decreasing trade was further affected by siltation in the bay due to the breakwater, and the completion of the railway line. The siltation of the harbour became a real problem that, by 1910, required continuous dredging. In 1914 the Breakwater was extended but proved to be a failure because the work began to subside and by 1920 about two thirds of the harbour was silted up. Alterations made in the 1920's increased the silting problem and by the 1940's the harbour was no longer used. More alterations were made in the 1950's and 1960's. The Warrnambool Breakwater is registered as a place of significance on the Victorian Heritage Database. REFERENCE: VHD Warrnambool Breakwater, Viaduct and Harbour. See http://vhd.heritagecouncil.vic.gov.au/places/1619 Shop originally had a shingle roof A white crochet doily from 1959 1997 was the school's centenary year. The first Mt Dandenong State School opened in a shed on the property of William Ferguson on the corner of Blythe and Old Coach Roads. The first teacher was Miss Ethel Gruber who opened the school on May 11th, 1897. It wasn’t until 1901 that the school shifted over the road into an old school building that was moved up to the new site from Ringwood. All the buildings were demolished to make way for a new school that opened in 1991. 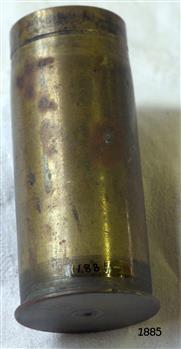 An article from the Gallery Magazine, dated July/August 2003 by Eva de Jong – Duldig about the Duldig Lectures and Exhibitions, detailing where Karl Duldig’s works have previously been displayed, the exhibition being held and the Duldig Studio. A black and white photograph, C. 1980, taken by Robert Dorin of Karl Duldig included 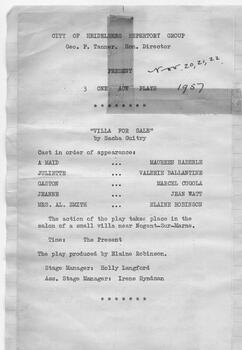 100 page photo negative album, no negatives. Pages made of transparent paper, cover is made of hard material fabric.

The negative holder belonged to Sgt Jack Grinton No 1043 38th Batt AIF. Part of the Grinton Collection which included hundreds of negatives and developed photos that he took in WW1. Refer 1317P, 1320P. Accesssioned from Catholic church at Patchewollock in 2013 where it had been since the1950s before which it was used for Sunday Mass in the local hall. Tradition has it to have been a field altar used by Rev O' Sullivan Goidenach, MM at Gallipoli and on the Western Front 1915 - 1918. Associated correspondence in archive includes a letter of gratitude from General Birdwood to Monsignor Goidenach.

A rare surviving example of a Roman Catholic Mass Travelling/ Field altar from the WWI era, used in Western Victorian venues before churches were built. 2 Aluminium Dog Tags on cord issued to an Australian Soldier A sepia photograph mounted on grey board of the children and teachers at the Greek language school. The people are standing and seated in five rows in front of a stage.

The Greek Orthodox Community with the support of the Ithacan Community in Melbourne established a Greek Language School in the early 1930s. The aim of the school was to teach the Australian born children of Greek parents the Greek language.

The teaching of the Greek language to the Australian born children of Greek parents ensured that the language was maintained within the Greek community. Two circular, white linen doilies with a crocheted border with circles. One 20 cm. diameter, the other 18 cm. diameter. Signed and dated 'Bellany '83' in bottom right corner of drawing. "Gunner W. Bell / Late Headmaster Norong Central State School No 3030 / Killed in Action France 12th Oct. 1917 / Greater Love Hath No Man Than This / That He Lay Down His Life For His Country and Loved Ones / One of Australia's Best / Presented to the School by Miss E. Mckinty / April 25, 1918"

Black & white, framed photograph of B Squadron 4/19 PWLH members at the parade for presentation of the Guidon to the Regiment at Simpson Barracks, Watsonia, Oct 1963. Wooden frame, glass fronted This Pool was demolished to make way for the Watermarc complex. 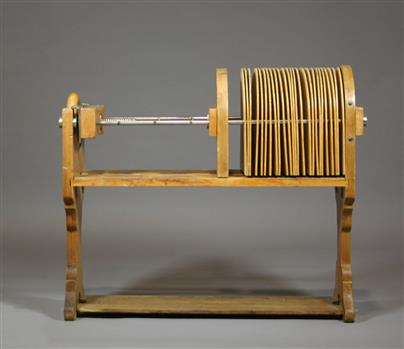 A 24-racquet 'Tunmer' press, manufactured in the United States of America, copying the style - and even the inscription - produced by F.H. Ayres, London. Materials: Wood, Metal, Glue