A black and white rectangular photograph.

A black and white rectangular photograph of the new stem post being fitted to the P.S Pevensey, whilst resting on the Moama slipway. The stem post was only one task in the complete restoration of the P.S Pevensey which happened in September 1975. There is a piece of chain attached to a crane at the top of the stem post. On the side of the Pevensey is a plaque with many lines of writing on it. The heading on the plaque says P.S. Pevensey.

This photograph is significant because it shows one of the tasks involved with the restoration of the P.S. Pevensey which took place in 1974/75. Kevin Hutchinson had come to Echuca from Mildura when the City of Echuca bought the Pevensey. He was responsible for the task of restoring the paddle steamer. He continued to work at the Port of Echuca until his death in 2016. In 1990 he received an Order of Australia medal for his contribution to the Port of Echuca.

This photograph is historically significant because the P.S Pevensey had come from Mildura to Echuca in the early 1970's to help develop Echuca's tourism industry. Kevin Hutchinson moved to Echuca with the paddle steamer , and was involved in the restoration. Kevin continued to work at the Port of Echuca until his death in 2016. He was also awarded an Order of Australia medal in 1990 for his work at the Port of Echuca.

On the front of the photograph can be seen a plaque with the heading P.S Pevensey. The plaque is covered with writing which cannot be read. On the back of the photograph, in black ink is written the following words, ' Pevensey restoration 1974/75. New stem post being fitted.' A large rock of generally oval shape and with a number of flatish surfaces and hole indentations which were identified by archaeologist Dr Joanna Freslov 2.6.2008 as being used by Aboriginal people as a grinding or tool-sharpening stone.

This large and very heavy stone was donated by Albert Emphield. Where he found it is unknown, but he worked in the Orbost forest areas and lived at Cabbage Tree Creek. 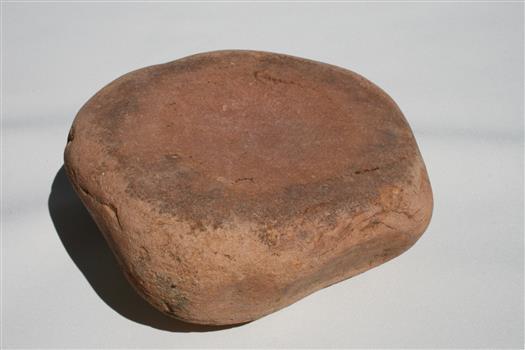 Large painting on board of symbolic landscape. Brown, yellow, cream and white. Framed.

In around 1924 a band of Gija people crossed fences onto their traditional land near Bedford Downs Station in the East Kimberley 2000 km northeast of Perth and killed nine head of cattle. This act precipitated one of the massacres to become known as the 'killing times'. Paddy Quilty, the station owner of Bedford Downs had his men collect wagon loads of firewood which was distributed around the camp. He then invited everyone to assemble for their rations. The food, laced with strychnine, was handed out. As the Gija people fell down dying in agony, they were shot. The firewood was used to burn the bodies. One boy escaped to the the story. Paddy Jamin Jaminji (c.1922-1997) painted The Hills of Bedford Downs Station as part of a series of painting about the Killing Times. It depicts the story and sites of the massacre. At least twelve killing sites are recorded within a radius of 150 km of Turkey Creek, WA. The painting was possibly discarded due to its damage in one corner and later collected from an old shelter at Warmun on a field trip by collector Neil McLeod in 1995. Mostly black surface with an area of white on the right side and a brown band near the top, lined with white dots. Work show the 'black soil country'. Ochres on Canvas. Wes Walters was a student at the Ballarat Technical Art School. This item is part of the Federation University Art Collection. The Art Collection features over 1000 works and was listed as a 'Ballarat Treasure' in 2007. 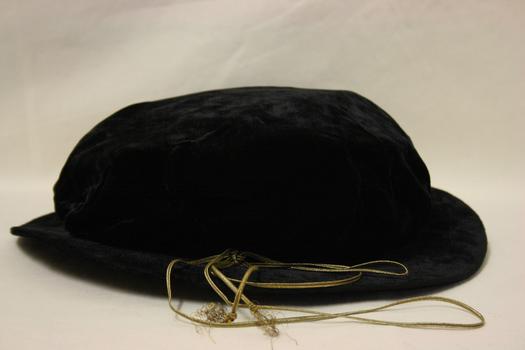 Navy blue velvet cloth bonnet with stiffened brim covered in same fabric as bonnet. Around the hat is tied a gold cord with tassels.

This academic bonnet belonged to Dr Mary Burnell. Mary Taylor Burnell was born on 21 February 1907, in Norwood, South Australia. She graduated with her MBBS in 1931. In 1932, Burnell served as a resident medical officer at Adelaide Children’s Hospital. By 1934 she was their Honorary Anaesthetist. It was also during this period that Burnell became the first female member of the Australian Society of Anaesthetists. One year later, in 1935, she worked as Secretary for the South Australian Section of the Society. Although resigning from her position at the Children’s Hospital in 1937, Burnell returned in 1942. The outbreak of World War II meant hospital staff and resources were drained. During her work, Burnell lobbied for a Department of Anaesthetics in the Children’s Hospital. Through working at both hospitals, she became aware of the great differences between administering anaesthesia to children and administering it to adults. In 1953 she was elected President of the Australian Society of Anaesthetists. She was the first female to be elected to this position. Two years later in 1955, Burnell was elected as a member of the Board of Faculty of Anaesthetists, Royal Australasian College of Surgeons. In 1966 she was elected Dean of the Faculty of Anaesthetists. Again, she was the first female to be elected to this position. Burnell worked tirelessly to promote the importance of anaesthetics in Australia. Burnell’s contributions to anaesthetics were recognised with Honorary Fellowships to both the Australian Faculty of Anaesthetists and Royal College of Surgeons. Two hand-made bows - accessories for a dress or blouse. 2483.14 is a yellow/gold colour made of satin or rayon. It is a bow with a long hanging tail. 2483.15 consists of 4 strips of green, red and black material gathered together with a safety pin.

These bows would have been attached to either the front of a blouse or back of a long dress as an accessory to change an outfit or give it style. It was probably worn by Mrs Whiteman and passed on to her daughter Marjorie Burton.

This item is an example of a handcrafted item and reflects the handcraft skills of women in the first half of the twentieth century. Accessory box for a No 6 Director Mk I

Possibly related to the range-finding equipment sent from England for dismantling during the 1940s so University of Melbourne Physics staff could develop their own equipment. Related to object 463.1