Unions Ballarat represents the history of unionism in the Ballarat region. Its collection includes items relating to industrial campaigns and of political significance to the region. The collection is comprised of a variety of formats - for example, plaques, correspondence, agendas, minutes, memorabilia, photographs and other artefacts dating from the 1800s.

The Unions Ballarat is the second oldest Trades and Labour Council in the world, founded in 1883 on the back of the Ballarat Eight Hour Committees established in 1856.

Trades Hall helps organise activities and campaigns with and on behalf of our affiliated unions.

The Unions Ballarat building is the home of the Trade Union movement in Ballarat and the centrepiece of the historic Camp Street precinct.

It is a building with a rich history, built for and still owned by Ballarat Unionists. Ballarat can be justifiably proud of its Trades Hall which was built in 1887-88 by Trade Union members. It still remains the hub of Trade Union activities in the Ballarat region today.

Unions Ballarat is open 9-5 Monday to Friday and the archivist is usually at the Hall Tuesday-Thursday. If you wish to view any archival objects, you must make an appointment by phoning 5332 3666. If you are not able to attend an appointment you made, please let us know as soon as you can. We are able to carry out information searches for you. If you wish to avail yourself of this service, it is important to provide enough detail for us to make a meaningful search. Please do not use abbreviations or acronyms - for example, there are two organisations in union history who have used the initials AEU (Australian Education Union and Amalgamated Engineering Union). Please note that as the collection is administered by volunteers, there may be a short delay in our reply.

The collection includes items relating to industrial campaigns and of political significance to the region. The collection is comprised of a variety of formats - for example, plaques, correspondence, agendas, minutes, memorabilia, photographs and other artefacts dating from the 1800s.

Disraeli was Prime Minister of the UK from 1874-1880. The story is a biography around his love for a married woman called Henrietta.

An account of the flooding of the Cardigan mine (near Ballarat) in 1902. Four men died and five were rescued from the mine.

With Stanley on the Congo

The book relates to Sir Henry Morton Stanley, a Welsh journalist and explorer. Stanley is known for his exploration of central Africa, his search for missionary and explorer David Livingstone and his search for the source of the Nile.

An account of the battle in which Nelson died. The battle ended Napoleon's chances of invading England 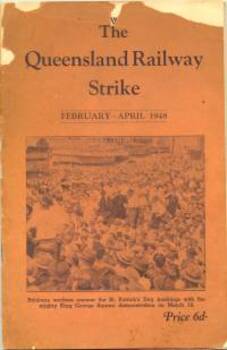 Copies of press clippings and other documents.

Trade union history and of particular significance to Ballarat Trades and Labour Council and the Amalgamated Engineering Union.

The book is a series of speeches from the United Kingdom, United States of America and other nations from Pericles to the second world war. It includes a speech by Cardinal Henry Manning on anti-Semitism; Manning's portrait hangs in the Ballarat Trades Hall Council chamber as he was a key player in the London dock strikes in the 1890s.

Bendigo Library Regulations pasted inside the book. Stamp: "Bendigo Regional Library Service". Stamp: "47201". Due date page is glued to back pages. Library card envelope is glued inside the back cover and stamped "KYNETON".

Biographical interest. Relevance to history of Ballarat and Australia.

The book is stamped "The private library of Rex Testro" on title page and on the page following the index.

Hazel Hawke was the wife of Bob Hawke (Australian Prime Minister). John Mildren was a state Member for Ballarat. Betty Borchers worked as a legal secretary. She was active in the Ballarat ALP and is the wife of Norm Borchers.

Ballarat Sustenance and Relief Workers' Union was a Trades Hall Council-sponsored organisation co-ordinating the self help activities of the Ballarat unemployed during the 1930s depression. (1935-1940) Central Unemployed Committee was established in Melbourne by Victorian Trades Hall Council in 1933. The Committee was known to actively lobby against work for the dole schemes.

The file forms part of the history of "unemployed unions" during The Great Depression. It also highlights attempts by previous Australian governments to impose "work for the dole" on to unemployed persons in exchange for unemployment benefits.

In case of emergency : how Australia deals with disasters and the people who confront the unexpected

Historical account of Australia's emergency services. Articles by a number of contributors and authorities.

Relevant to how disasters and emergencies are serviced in Australia, public health and safety. Original architects' drawings for the construction of Trades Hall, Ballarat. November 5th 1886 the building committee called for tenders for the erection of a Trades Hall on the following conditions. The amount to be expended to be no more than £3,000; bluestone foundations; the front of the building to be of Grampians freestone and walls of brick. Building to be 3 storeys high, containing 14 rooms with a hall capable of seating 600 persons, roof to be of slate and workmanship and material to be of the best quality. The design submitted by Messrs James and Piper was accepted subject to amendment.

Relevance to the history of Trades Hall, Ballarat.

Relevant to the history of industrial relations and rights in the ETU.

Mein Kampf is described as an introduction to the mind and methods of Adolf Hitler. The publisher's note is that the re-publication of Mein Kampf was undertaken to provide material to students of 20th Century history.

It wasn't meant to be easy: Tamie Fraser in Canberra

Biography of Tamie Fraser. Tamie Fraser was married to Malcolm Fraser who was Prime Minister of Australia. Includes her role of campaigning on her husband's behalf in the 1975 Federal election. The author, Christina Hindhaugh, is Tamie Fraser's sister.

Relevant to the history of liberal and labour politics in Australia, including events around the dismissal of the Whitlam government in 1975.

Margaret Thatcher was a British politician and served as prime minister from 1979 to 1990. She was known to be against trade unions and was Prime Minister at the time of the Miners' strike (1984-1985).

In black ink: To dear papa with love Doreen. Christmas 1929.

The history of the revolution that led to America's declaration of Independence from Britain in 1776. Significant characters in this part of US history were John Adams, Abigail Adams, Thomas Jefferson, Benjamin Franklin and Edmund Burke.

Relevant to the history of the United States. The declaration of Independence document has become symbolic of human rights in the country - thus, the events leading to it were a catalyst to how American democracy is interpreted and practised.

Front cover: Title and author name. Back cover: Statements of praise by Dan Rather, Andrew Burstein, R.B. Bernstein and Edith B. Gelles.

The courtesans : the press gallery in the Hawke era

The relationship between the parliamentary press gallery and the ALP/Hawke government. During this time, the press gallery was more inclined to support and lean towards the government and to reject the Liberal opposition. Thus, having a very influential role.

Relevant to the history of politics in Australia and parliamentary process during the Hawke era.

Front cover: author's name and title; quote from Peter Robertson - "Journalists are, on the whole, are not to be trusted."; black lettering.

In the service? : a history of Victorian Railways workers and their union

A history of the Victorian Railway Workers and their union. The union was formed from an amalgamation of various craft unions in 1911 and has involved itself in social change. The union is now part of the Australian Railways Union.

A social history of Ballarat after the decline in gold mining. Includes analysis of population, decline in the local economy and restoring financial fortunes through tourism. Discusses effects upon Ballarat as a result of WWI and WWII.

Significant to the history of the Ballarat and the effects of gold mining, tourism and war upon the fortunes of the region. It is a companion to Weston's earlier book, "Lucky City".

The Australian Society for the Study of Labour History describes the journal as follows: "The interdisciplinary nature of labour history, and its acceptance of less traditional sources, including folklore and oral testimony, make it a fascinating field, alive to past and present social justice issues. The journal, which has been appearing twice yearly since 1962, is the premier outlet for refereed, scholarly articles in its field in Australasia. Because ASSLH aims to raise historical awareness in the community, Labour History also publishes essays, reviews, and memoirs that reflect the involvement of labour historians in the making of history."

Richard Nixon was President of the United States from 1969 until 1974 when he resigned (to avoid impeachment) over the Watergate scandal. The book is his account of East-West relations, arguing that the USA should be world leader to maintain peace. Nixon was succeeded by Gerald Ford who issued him with a pardon.

A history of Ballarat libraries

Commemorates the centenary of the Ballarat Library service in 1978.

Relevant to the history of Ballarat, community and library services in the region.

Photograph: Jaala Pulford MLC and John Lenders MLC. A third person is pictured (left), but has not been identified. The photo is taken at a bar - location unknown. Jaala Pulford has been an MLC since 2006 representing the Western Victorian Region. She currently serves as Minister for Regional Development and Deputy Leader of the Government in the Legislative Council. John Lenders served in the legislative assembly and legislative council in the period 1999 to 2014. He served in the cabinet, as Minister of Education and Treasurer in the Bracks and Brumby governments. He was appointed leader of government in the legislative council whilst the ALP were in power. John Lenders retired from politics in 2014.

This is an OH&S manual targeted at construction industry workers. Includes issues such as asbestos, chemicals and use of tools. This is the third edition of the manual. The most recent copy of the manual is available from the CFMEU.

Relevance to workplace health and safety and trade unions' stance on pertinent issues.