The Blackburn Cricket Club was founded in approximately 1888 then reformed in 1902 when it played in the Eastern Districts competition. Today, Blackburn is one of the largest cricket clubs in Victoria with strong representation in the Milo in2 Cricket, junior, senior and veterans sections. Blackburn Cricket Club prides itself not only on its success and how we play the game but also that we are "a club for everyone".

Cricket is played on Friday nights, Saturday and Sunday

It is free to come and watch at the Blackburn Cricket Club. We are " a club for everybody" and welcome visitors. The Blackburn Hall at Morton Park

Blackburn Hall, also known as the Recreation Hall and Morton Park Hall, was used as community centre until 1965. In February 1929 the hall opened as a picture theater. The hall was a significant social venue for the cricket club. Blackburn Milo in2Cricket kids were the first club selected to take the field for a Melbourne Renegades home game in the inaugural T20 competition in Australia on 22 December 2012. Centre co-ordinator and head coach Dwayne Rabel took 20 kids to the game. Black and white portrait of the cricket team anf officials. In 2009 participants Blackburn Cricket Club Milo in2 Cricket were selected to stand with the Australian team during the national anthem on day 1 of the Boxing day test at the Melbourne Cricket Ground. Morton Park is the home of the Blackburn Cricket Club. Located on Central Rd in Blackburn near the railway station Morton Park has two ovals and the scene of many a victory and celebration. Blackburn Cricket Club team of the century 1902 - 2002. Selection Committee The selection committee comprised four life members whose experience and knowledge of Blackburn 1st XI cricket covered as many years from 1902 -2002: Michael Long (1966 - 1992) Chair Andrew Smith (1977 - 2003) Terry Dynes (1957 - 1986) Neville Jacobs (1943 - 1978) 1. Peter Grant - Right hand opening batsman. Five premierships in 3 decades of playing (1950s, 1960s and 1970s). 2. Darren Croft - Darren (Crofty) was a right hand opening batsman. He is a dual premiership player and been the clubs captain and coach. He made a century in a gutsy partnership to win the 1993-94 Grand Final. 3. Terry Sacristani - Right hand upper order batsman. Won five batting trophies and four prestigious Neville Jacobs trophies. Playing from 1979 - 1990. 4. Tom Cullen (Vice Captain) - The most talented batsman to represent the club. He was a captain-coach. He scored a triple century to win the Under 16 premiership. Tom played district cricket for Fitzroy and was selected to play Sheffield Shield for Victoria. Tom captained-coached Box Hill in the sub-districts and returned to Blackburn in 1987-88 until 1994-95 where he won one 1st XI premiership. He won four batting trophies and seven Neville Jacobs trophies in eight seasons.

This is Blackburn Team of the Century Darren Croft scored a century at Morton Park to win Blackburn Cricket Club the McIntosh Shield premiership for the 1993/94 season. Batting with Simon "Willie" Nelson, Darren hit a four to bring up the win. The cap has the initials NJ written into the inside top of the cap. Bat used by Darren Croft to score a century and win Blackburn the McIntosh Shield in the 1993/94 season. 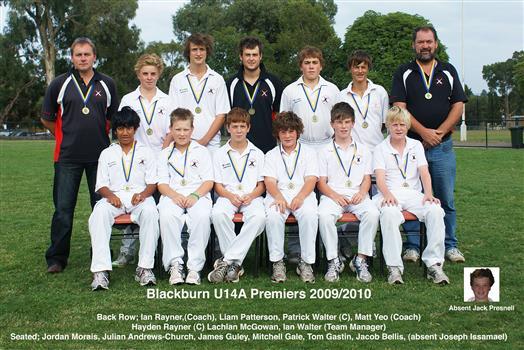 The Turk (Peter Turnley) is an ex President (3 seasons), coach and 20 year player (Senior and Vets) who hs been at the club for many years. He has won the bowling averages 8 times across 3 grades and was also the recipient of the Best Clubman award in 1989-90. Turk is famous for his culinary skills which are enjoyed by many. On 27 December 2011 the girls from Blackburn Milo in2 Cricket were selected to take the field in a girls only lunch time Milo cricket session on the second day of the Boxing Day Test at the MCG. The Girls were presented with pink tops in keeping with the Jane McGrath breast cancer awareness campaign. Under 16 A premiership team 2009-10. Coiached by Lachie Head (Life member and winning player in a Blackburn McIntosh Shield side) Club legend Tom Cullen. Tom is Blackburn's best ever batsman and is a life member, team of the century player and ex-President. On 24 December 2010 Sam Montgomery was one of the Blackburn Milo in2 Cricket kids fortunate enough to meet Michael Beer. Michael is a Victorian spin bowler who went on to play his first test match for Australia in Perth during the 2010-11 series. Picture of a 1930 Blackburn CC team. The picture is taken at the northern end of the oval with the pine trees along the railway line in the background. Twelve players and two other gentlemen in full suits are pictured and there appears to be a mix of young and middle aged men. Two players (front row third from right and second row far right) appear to be wearing the same jumper in full sleeve and vest form respectively while two other players are wearing similar jumpers and another two wearing plain versions. The caps being worn by two gentlemen appear to be identical. Thirteen original signatures and the year are signed on the paper mat to which the picture is glued. The signatures appear to be signed using a fountain pen however another name (David Murray) appears to have been added using a pencil at a later date. Some of the signatures include D Cook, H.M Wilson, G.A Jorgood, C.G Williams, Rliekle, S Mackinlay and L.A Warne. Les Warne played in the 1st XI at Blackburn from 1930 to 1955 and was the captain of the 1938-39 premiership winning team. Les recieved a life membership in 1953. There are many outstanding woman who have made significant contributions to the success of our club. Phyllis Sloan (second row white pants) and Lisa Robertson (nee Paterson - front row brown dress) are just two of these women. Phyllis recieved her life membership in 1986-87 and was the clubs first female life member. Phyllis is also the only club memeber to win 3 Best Clubperson awards winning in 1982-83, 1983-84 and 1987-88. Lisa received her life membership in 2001-02. Lisa has served the club in many varied capacities over a sustained period and has also won the club's Best Clubperson award in 2000-01. Barb Schumacher (Best clubperson 2007/08) is also present. Blackburn Cricket Club Milo in2 Cricket conducted a session on the MCG alongside the Australian test side prior to the boxing day test. 50 of Blackburn's youngest walked onto the hallowed turf of the world famous ground with a number of the Milo Coaches including Reggie Kunst, Dwayne Rabel, Mark Cox and David Couper. The kids then has an opportunity the meet two Australian Players. Phillip Hughes was making a comeback and trying to save his test career and Victorian Michael Beer would later that series make his test debut.