Coal Creek is a recreation of a Coal Mining town in the 1870's. Set on 32 acres of bushland with over 50 buildings.

Coal Creek is a recreation of a Coal Mining town in the 1870's. Set on 32acres of bushland with over 50 buildings.

Coal Creek Community Park and Museum exists to promote awareness and understanding of the natural, industrial and social history of South Gippsland from pre-European settlement through to 1920, through the collection, preservation and communication of relevant cultural material.

26.1 - This is a portrait of a young boy holding a whip in one hand and leaning on a table which is draped with patterned material. There are palm leaves in the forground in front of the table and a backdrop of leaves behind the boy. The photograph is sepia in colour and was originally on a backing board with Yeomans of Numurkah Victoria.

An example of the style of portraiture in the late 1800's early 1900's showing the stylised posing. Reference: American Journal of Pharmacy, volume 1, page 162. "So rapid is the progress of this change, that it is seldom we meet with the article in our shops which is not more or less injured by it. The first sign of the loss of alkali, is the efflorescence on the surface, which gradually extends till the whole crystalline mass is altered. It is from this cause that we have so much difficulty in pleasing those who are particular about the quality of their "smelling salts." A preparation, called " the Preston smelling salts," has within a few years been introduced from England, and has deservedly been much sought after. The manufacturers have wisely put it up in very wide mouthed bottles, which enable one to inhale a much larger quantity of ammonia at once, and thus increase the apparent strength of the salt. But it has other qualities to recommend it, than the manner in which it is put up for sale. It retains its odour for a longer time and wastes more slowly than the common smelling salts. It was generally believed, when the article was first brought here, that its superiority was owing to the sublimation being made at once into the bottle, so as to avoid any loss of ammonia by unnecessary exposure to the air. An examination, however, will satisfy any one that the salt is crystallized and not sublimed. The superior compactness and hardness of a crystalline over a sublimed salt, are great advantages in so volatile a substance as the carbonate of ammonia; and to this, I have no doubt the good qualities of the Preston salts are to be attributed. The salt may be crystallized with great facility in the winter season".

'PRESTON SALTS' on side. Brown striped milk jug with plain brown handle and blue and white picture in a circle on the front. Music book, "The Victoria Music Books, Pieces for advanced performers for the pianoforte", By various composers. The cover has a cream background with bold black printing; down the left side are Baroque-style grotesques enclosing a portrait of a young Queen Victoria.

Small square tin with push on lid, dark green coloured and depicting yellow flowers with gold leaves in an oval with text. 8627.1 - Sealed envelope with oiled silk inside Short cylindrical off-white glazed ceramic pot, lid missing, with ridge at base of pot, and text impressed into base.

This item was the property of Mr Robert Cornall of Kardella.He was one of the first selectors in the are and the name of his property "Fleetwood" which he took possession of in 1882. He grew potatoes as his main income and was the first farmer to use fertiliser to increase his crops quantity.he died in 1924 and is buried in teh Korumburra cementary. This item is engraved with his name and name of his property. The was sold by Sears and Roebuck and is seen in teh 1902 catalogue. Made of brass and steela nd manufactured by Joseph Rodgers and sons . The item is called a lancet but is also known as Horse Flem and was used for bleeding horses to remove bad blood.

This object is of historic and scientific importance as it was used by a local potato farmer, Robert Cornall of Kardella as a bleeding tool for his horses.When purchased this item would not have been engraved.This item is engraved with the name Robert Cornell 1886 and reverse Fleetwood Gippsland Korumburra. Fleetwood was the name of his property which he settled in 1882.Bleeding of horses during this period was a way of removing bad blood and this process is still used today.This shows a clear link from the 1880's of a vetinary procedure to 2012 where this process is still used by Vetinary surgeons. A pair of rimless spectacles with a metal nose piece. The lenses and arms are plastic. Handle for Pumping Snout for water to come out from Small Wooden Brush with a small tag marking 8009.2 Marked on the side of brush as well. B cycled in Ink Framed print of whole page advertisement celebrating 40 years of the O.Gilpins's Stores, in the 'The Herald' newspaper centenary edition of October 15 1934. Aqua tinted clear glass bottle, oval in section with embossed initial on base. 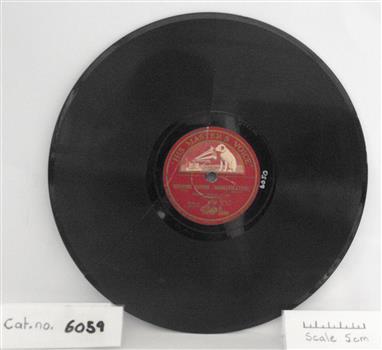 Phonograph record with red 'His Master's Voice' label; Side 1: 'Morning Papers', Side 2: 'Du Und Du' - Marek Weber and his Orchestra 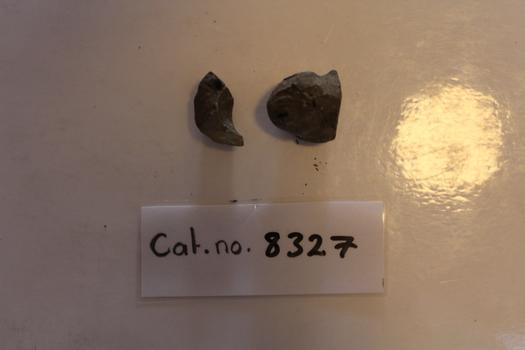 8327.1 - Mudstone concretion and shell, one piece of shell has fallen away, small. Both pieces show small, plant fragments