Tramways/East Melbourne is one of the last traditional RSL Sub-branches in the city region.

Mixture of books, Audio Visuals, medals and memorabilia, from Boer War to Afghanistan

What a fantastic collection. I can't wait to see more of your memorabilia on here!

Hi Belinda. I hope 2016 is looking after you and Cameron. I have some great news about our Memorabilia Project. As of 30 April 2016 we formalised the establishment of the TEM Memorabilia Project. Sadira Campbell, the partner of one of our Contemporary Afghanistan Veterans, has set up an arrangement with TEM and Deakin University Museum Studies. A flyer was prepared by Sadira, inviting students to gain practical experience for their studies by being involved in the TEM Memorabilia Project, to gain practical experince for their Masters Studies. Two people have expressed interest. We met with Ari Hunter, whom you know and Chris Ingle who was not able to attend this meeting. John Dobeli, who is now the TEM Librarian and Memorabilia Curator and I are really excited about the valuable skills the new team will bring to us and give us a new momentum to getting our Memorabilia up to your projects expectations. We look forward to catching up when you can fit us into your busy schedule. P.S. Many thanks for putting our Library Accession Register on the site. I am curious why it does not appear in numerical order? Best wishes Belinda. Glenn Read

Congratulations to Glenn Read for all of his work in getting the project off the ground and running. His work with Ari in research and cataloguing has taken many hours with some assistance from John Dobeli . Well done team. Colarts Sydney is inscribed on the image in left corner. "THE BAND OF THE 5TH AUST. INF. BDE. PASSING THROUGH BAPAUME ON THE 19TH MARCH, 1917" inscribed in white ink on the mat board.

Book - A Voyage with an Australian Sailor

Book - MONTY HIS PART IN MY VICTORY (War Biography Vol.3) 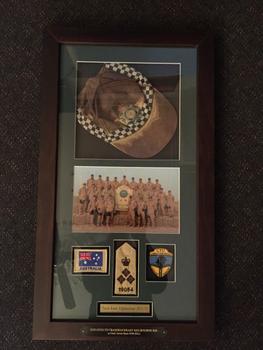 The Panel consists of 34 assorted replica medals and pins that relate to the Australian Army Training Team in Vietnam (AATTV), from July 1962 - December 1972. The AATTV team was awarded various medal for meritous conduct throughout this period. Alongside the replica medals and badges are three information panels that detail the deeds of this group.

Book - SPOKEN FROM THE FRONT (SAS in Afghanistan)

Book - THOSE WHO FALL (A Bomber Pilots War Recalled)

Book - IN THE LINE OF FIRE Framed certificate awarded to Ernest James Bray of the Middlesex Regiment, in memory of combat in June 1940.

Book - THE BROKEN YEARS (Australian soldiers in the Great War)

Book - Under the blood banner(THE STORY OF THE HITLER YOUTH)

Book - WITH ROMMEL IN THE DESERT Printed copy of an article from the