As an island Nation, Australia relies on seafarers. The work of the Mission to Seafarers is a way of acknowledging their work and hardships, by provision of support.

All seafarers and port workers are the unsung and unknown front line key workers for the movement of essential cargo to keep all countries’ wealth and health stay afloat during this extraordinary time.

Two letters from Allan Quinn to his mother written in 1945. Letter #1 Allan writes to his mother as he leaves Melbourne Letter #2 Allan depicts his time spent at the mouth of the Brisbane River

These letters are of historical, social and interpretive significance as they provide information about the life of a seaman during the mid 20th century. 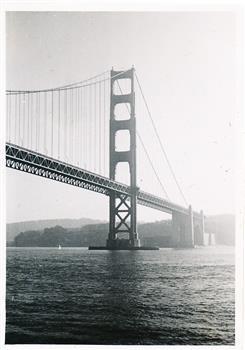 Photograph - The Golden Gate (The Entrance to San Francisco Bay)

A black and white photograph of the Golden Gate Bridge, in San Francisco, dated 4-12-49. Colour photograph of the ocean and deck of the M/S Fenris, looking forward to the sea. It is dated 30-12-48. The photograph is mounted on a 7.4x9.8 white card.

This photograph is part of series of four, the only colour photographs taken by Allan Quinn while docked in Brazil on-board the M/S Fenris. The photographs are mentioned in one of Allan Quinn's letter to his mother (Object 0150).

The two page letter written on a single sheet of pale blue paper (0849.a) is dated 1/10/1950. There is a matching envelope (0849.b). The forwarding address is typed on a brown sticker that partly obscures the original address. The forwarding address reads Messrs. Miller & Co. S. A. Apartado 12, Las Palmas, Grand Canary. There is a red Swedish stamp in the top right corner. Across the middle of the envelope (in red) are; a rectangle shipping stamp enclosing a ship ensign with the letters R, B, T, A in each quadrant, a postmark and a franking stamp.

Indicates a friendship at the time.

The letter is written in Swedish except for 'Hello Allan!'. In the signature position is written 'Andersson' (tbc). small rectangular plaque mounted on a wooden board.

Olive Cramer who passed away in August 1966, this plaque along with an Organ Lamp were dedicated to her on the 2nd of April 1967. Two vases were later added as well.(see record 0670 this database)

In loving memory of Olive Cramer who gave over 40 years of devoted service as organist of this church. 2nd April 1967 Photograph - Women in their coat at the beach Reproduction ( Lithograph?) framed mounted and glazed print. The Image shows a group of soliders kneeling before a makeshift altar during World War One in Flanders field with a Red Cross flying on a flag pole at the far right of the composition. A Union Jack flag is being used as an improvised altar cloth. A priest or chaplain in a surplice, also a soldier , administers the sacrament to the reverent congregation. The print is glazed with a substantial window mount and housed in a dark wood frame with eyelet screws and very rusted hanging wire.

The original was painted by William Yates Holt Titcomb (1858-1930). He was a professional painter and one of his specialties was religious paintings. The original is in Clifton College Chapel, Bristol, England (visible in their virtual tour online).

This print was donated by an LHLG member Miss Bolton in 1918 and was intended for display in the Memorial Chapel of St Peter. See file for research details of artist - see also 'Jottings from our Log' issue no 51 Midwinter 1918 under heading ón p.3 'Thanks'. The print was probably intended to complement the print "In the anxious Hours of Waiting " donated by the Misses Godfrey in 1917. Seamen gathering in front of the Central Institute, Siddeley Street, where buses are waiting for them to take them on an outing.

The sailors, officers and Reverend Gurney Goldsmith (centre) were picked up from the Siddeley Street mission by two double deck motorbuses. On the buses is written: "Motor Tyre, The place for tyre, 400-3-5 Swanston Street, Melbourne - Red Cross Hospital - The Globe". The Mission flag and the Union Jack are brought with the men to the St John's College, St Kilda East. In the Age we could read: "SAILORS' PICNIC. The seamen from ships in port, were hospitably entertained on Christmas day by friends of the Victoria Missions to Seamen. The day was spent at St. John's College, East St. Kilda, by invitation of the warden and Mrs. Hart. The sailors enjoyed the treat, and entered heartily into the sports held during the afternoon. The evening was spent at the institute on the Australian wharf when every sailor received a Christmas' present from 'the brig." The photograph was used in the "Jottings fro our log" quarterly publication of the Mission in 1916. Black and white mounted group photograph. Many in the group are wearing military uniform

Possibly an image of a family member of the Olivers or close friends. The students in military uniform suggest around the time of the Great War 1914-18. The handwritten date is slightly illegible but most probably 1919. According to his autobiography Frank Oliver, senior Chaplain from 1930-1960 at MtS, studied primarily at Trinity College, University of Melbourne after war service in the Army Medical Corps. The group may alternatively belong to a relative of Mrs Moira Oliver whose father Rev'd Good was minister at St Jude's Carlton.

Established in 1829 under the patronage of George IV, King's College is one of the oldest and most distinguished centres for the study of classical languages, literature, thought, religion, art, archaeology and history in the UK. This trowel was used by Her Excellency Lady Stanley in the absence of her Husband the State Governor of Victoria due to illness , at a ceremony in 1916 to lay the foundation stones of both the main Mission to Seafarers building designed by architect Walter Butler . A substantial photo story of the event appeared in a local newspaper see Links field for details. The trowel was discovered to exist around the centenary of the building owned by the Moss family in Toronto Canada. The trowel was gifted to the MTSV in mid 2019 courtesy of Professor Uma Kothari, of Manchester University, and the Ross family who met at the Chapel of Mission to Seafarers, London for the presentation.

This re-discovery and gift of this decorative arts object provides a link with the historic and ceremonial occasion of the laying of foundation stones for the first phase of the Mission to Seamen ( the chapel and main complex ) which opened in 1917 and has operated continuously at 717 Flinders Street. Significantly patron of the LHLG at the time, The State Governor's wife, Lady Stanley actually officiated and a record of this can be seen in contemporary press coverage in 1916. 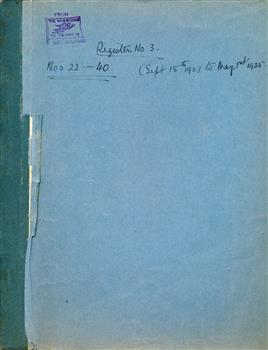 All the weddings performed in the St Peter the Mariner Chapel from September 1923 to May 1935 are documented in the register. Each page records the necessary information for the marriage to be registered legally in the Commonwealth of Australian.

The register is a record of the weddings conducted at the Peter of the Mariner Chapel between the 15th of September, 1923 to the 1st of March, 1935. b/w photograph of Charles Page and his wife Lavinia on their wedding day, standing outside in a doorway. Full length shot. Round buoy decorated in red and yellow sections with the word "Marra Melbourne" painted on the front. There is a rope that is strung through sections of the exterior.

This is an example of a life buoy used regularly on ships.

In black paint on the front of the buoy: "MARRA MELBOURNE" The stones are the few remnants of the first Central Institute.

Two and a half page letter written on two sheets of unlined buff-coloured paper (0810.a1-2) headed M.S.Fenris, Baltic Sea and dated 03.05.49. The blue-grey coloured envelope (0810.b) has a 7cm border of diagonal light blue and white stripes. There are two Norwegian stamps, one olive green and one orange, postmarked Stockholm. For Ship To Shore newsletter published in Autumn 2004. Depicts both Reverend Dalling and Mrs M.Duckett a key supporter of MTS who worked with Opportunity shops raising funds for the Mission to Seafarers. The house of the Duckett family of Riversdale, Hawthorn was host to seafarers for picnics and outings in the 1920s.

Mrs Duckett nee Maclennan was linked to families of both names who according to membership records appear to have provided long standing support to the Mission through much of the 20th and into the 21st century. 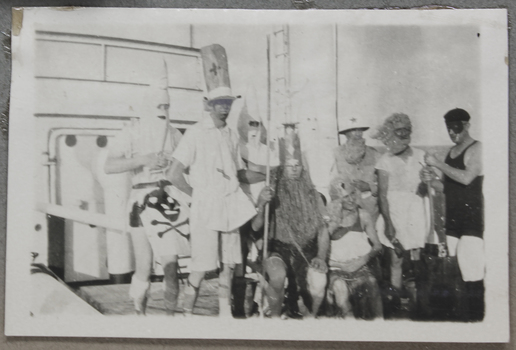 Photograph of the Nyanza crew on the day of Georges VI coronation.