For their safe and efficient operations, ships depend on seafarers working far from their home and family for months, sometimes years and often in harsh, isolated and dangerous conditions. The Mission to Seafarers Victoria supports seafarers in the most practical way, by provision of support. Mission to Seafarers is an international organisation that began in 1836, with 26 facilities operating in Australia. Letter from Allan Quinn to his mother which depicts his journey from Adelaide to San Francisco. Book - Garnered Sheaves: Memoirs of The Mission to Seamen, Victoria 1853-1934

Aileen was the daughter of Reverend Richard Vallencey Danne and Mary Danne , nee Johnston, herself daughter of Reverend Kerr Johnston. She was married to Alfred Augustus Brown. In 1935 she wrote the Memoirs presented during the annual meeting of the Mission on the 10th of April by her brother, Reverend Noel Johnston Danne. The 16 pages Memoirs were sold for fundraising purposes for the Mission. In the article from the Herald published on Wednesday 10 April 1935, page 14 : "An interesting presentation took place during the afternoon when the Rev. N. J. Danne, on behalf of his sister, Mrs A. E. Browne, will present the Mission with a copy of die Memoirs of the Victoria Mission to Seamen from the year 1853, when their grandfather was the first chaplain of the Mission. Further copies of the memoirs were sold to assist the funds of the mission."

Letter from Allan Quinn to his mother written in 1945 which depicts his time spent in Melbourne and meeting with his father. Telegram - Telegram to Lillie from Ted

A telegram in three parts consisting of: Envelope, Brochure and Telegram.

The telegram was sent to Lillie Duncan shortly before Christmas, by one of the seafarers she met through her work with the Ladies Harbour Lights Guild. The brochure advertises seasonal rates on telegrams to ''all parts of the British empire and the United States of America''.

The telegram is evidence that Lillie Duncan had personal contact with the seafarers she met through the Ladies Harbour Lights Gild. The brochure shows the importance put on the Christmas period, as well as the strong relationship between Australia and Great Britain. Photograph - Padre Oliver in front of the Mission, Flinders Street

The image suggests that Frank Oliver was photographed around the time his tenure was coming to a close in the late 1950s.

'Padre Oliver' is penciled on the back and the number '179' is stamped there. 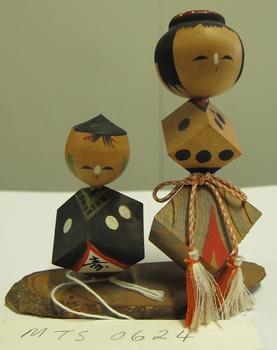 Ornamental Japanese wooden dolls mounted on a small wooden base A colour photograph of the ocean and a ship - the Cape Town Castle - off the coast of Cape Colony, dated 29-2-48.

This photograph is part of series of colour photographs taken by Allan Quinn while sailing to Capetown from New York on the S.S. Morgenster - which is mentioned in some of Allan's letters (such as Object 0152). 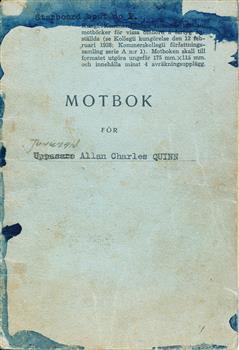 A small book with pale blue covers, stained with dark blue ink. There are six pages held together with two staples.

The entire passbook is written in Swedish. It was used between the 28 of Febuary 1945 and the 30th of November 1945 and seems to record Allan Quinn's wages. Allan visited Sweden many times, and eventually learnt the language.

This is a passbook belonged to Allan Quinn, and is part of a collection of letters and photograph depicting aspects of life at sea for a young man in the era immediately following World War II.

Cover: STARBOARD BOAT NO P. (typed) / MOTBOK / FOR (printed) / JUNGNAN (handwritten)/ UPPASARE (crossed out) ALLAN CHARLES QUINN (typed). In the top right hand corner is a paragraph of writing in Swedish. Reverse: PRINTED IN U.S.A U92260 printed in black ink. A black and white photograph of the port at Rouen, France, taken on the 5th of June, 1949. There is a narrow white boarder around the image.

This photograph is one of a series taken by Allan Quinn while travelling through France in mid-1946. There are several letters relating to this journey.

On reverse: PORT OF ROUEN / 5-6-49 handwritten in blue ink. Below this is the mark "ItI"in pencil.

A self-folding letter written in green ink (0868.a) headed Oslo and dated 28/04/51. It is addressed to Mrs K Hayes, 14 Victoria, this has been crossed out and replaced by 'Fitzroy' Street, St Kilda, Victoria. The return address is Allan Quinn, C/- G.P.O.,Oslo, Norway. Written at right angles to the return address Allan has written "Made a mess of the address but my thoughts were wondering".

In this letter Allan refers to Kip's father's forth coming visit to Melbourne. This will be Jim Hayes; letters 0858, 0862. Large b & w photograph. A desk covered with magazines and chair make the "Dutch corner of the dutch seaman's center" as indicated in dutch on the wall "hollands hoekje van de nederlandse zeemanscentrale". The calendar indicates it was taken in 1966. "projuventute oranje kalendar 1966" with photograph of Queen Julian of the Netherlands. Brown sheet of paper. top left corner has The Mission To Seamen flag. Leaflet lists New Years events for seamen for the year 1907. Photograph - Officers on board their ship with Father Frank Oliver Book - Encyclopaedia Of The America's Cup In Stamps

Designed to hold 50 commemorative stamps this book contains an outline of the history of the America's cup from 1851 onwards with chapters on key events venues and victors. (Essentially a summary history and highlights)

This book complements a key collection item (see 0621 this database) a mounted and framed fragment of the sail used by the victorious '' Australia II' yacht in the America's Cup competition of 1987 hosted by the Royal Perth Yacht Club. Several items were given by a seafarer, Mr Nicholas Garlick (1926-2009) into the care of Father Brady who retired from St Pauls Cathedral, Melbourne in 2018. Father Brady later donated the collection of; objects, documents and an extensive collection of cruise ship menus (1937-end of 20thC) to the Mission via the intermediary William Hastie, volunteer at the Mission for Seafarers. Small black and white photograph of people dancing in the Flying Angel Club at Mission to Seafarers Melbourne. There is a band on the stage in the background of the photograph and several couples dancing.

The Mission to Seafarers held many social functions to raise funds for the work of the organisation and to benefit visiting seafarers. Many dances were held on a Saturday with good attendance. On the pillar on the left of the stage there is a photograph of a monarch, possibly King George VI, thereby dating the photograph at pre-1952.

The Mission to Seafarers as an organisation is dedicated to not only providing spiritual and practical support to seafarers, but has long found it important to provide social opportunities as well. In the past there have been many dances, concerts and other social events that have been designed to cater for visiting seafarers. 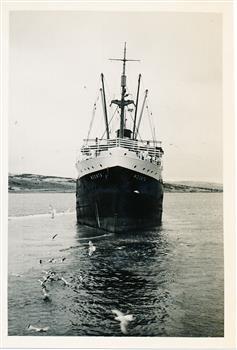 Black and white photograph of the "Moonta" from Port Adelaide sailing at Port Lincoln. The ship is sailing in the middle of the frame surrounded by several seagulls, situated towards the bottom left of the frame. Port Lincoln is in the background.

This series of photographs captures life at sea and the conditions on the ship M/S "Mongabarra" Goteborg in 1950.

This photograph is part of the Allan Quinn collection, which is a pictorial autobiography, and it represents one of many moments of his time abroad as a seafarer. 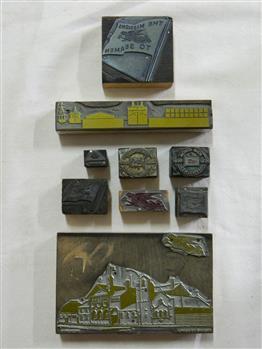 These printers blocks were used as formal identifiers on documentation. This was not necessarily organisationally generated.

These printers blocks were used as formal identifiers on documentation. This was not necessarily organisationally generated.

This pass paints a picture of the regulations that would have covered sailors visiting ports.

Written on it are: Allan Quinn Australian M/S Teuris (slight illegible) R.B. It is dated on the reverse: 24 Jun 1949 Temporary chapel at the Central Institute, Siddeley Street. The Institute designed by Walter Butler was inaugurated in November 1907 by Governor Northcote. The proposed chapel was finished in 1909 and dedicated on the 26 January.

The pictures shows the enduring use of the religious furniture which is still in the St Peter the Mariner chapel in the Flinders Street mission. Photograph album - On board the Skaregrøm and William Mitchell Photograph depicting the foundation stone laid by Lady Stanley in November 1916, in 2019.

Born Margaret Evelyn Evans Gordon, she married Arthur Lyulph Stanley, 5th Baron of Alderley, in 1905. Appointed K.C.M.G. in 1914, Sir Arthur served as Governor of Victoria from 1914-20. Lady Stanley became the first President of the Australian Red Cross, Victoria, in 1914. The trowel (see item 2074) used for the laying of the stone was gifted to Lady Stanley and ended up in Toronto, Canada, where one of her daughters, Victoria was living. The trowel was donated to the Mission in 2019.

A picture of the stone can be seen on the article of the Leader dating from Saturday 25 November 1916, page 25.