Visit our historical museum featuring exhibitions on geology, maritime history, aboriginal culture, natural history, early settlers and Phillip Island's schools, cemetery and bridges. Changing displays. Videos of the history and wildlife of Phillip Island and district are also available for viewing. The society meets monthly at the Heritage Centre Cowes, from Feb to November at 2:30pm on the second Wednesday of the month. Visitors are welcome. Photograph of eleven people including The Earl of Stradbroke and family standing beside motorcar - 22/11/1921. From Jessie Smith's collection of Island activities & landscapes. Koala on table. "Edward" was rescued in a bush fire by Mrs. Oswin-Roberts.

Report of a letter by Mrs R Osborne to Phillip Island Shire Council criticising the actions of the Penguin committee and the concrete ramps they had built. A small building - known as Tea House - near sand dunes at rear of Shelly Beach.

Part of collection donated to the Museum by Mr. Bernard Grayden. 1975 Book - Australian At Home : notes and anecdotes of life at the Antipodes including useful hints to those intending to settle in Australia

Book from the Cleeland Bequest - a comprehensive collection of books relating to the History of England, Civil & Military, Religious, Intellectual & Social. 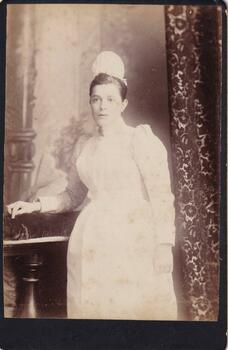 Article about Bev Forrest chosen as Belle of the Ball at the Phillip Island SYFC ball at Newhaven on Friday 17th September 1965.

Letter to newspaper complaining about high Ferry charges on punt between San Remo and Phillip Island.

Letter to newspaper complaining about high Ferry charges on punt between San Remo and Phillip Island. 466-40: George Walton settled at Rhyll after the Land Settlement Act was granted 8 acres in the township of Rhyll. He was the father of a large family, many descendants still live on Phillip Island. He had the honour of being the first brickmaker on the Island. He died in 1912 in his 81st year. Also Harriet Walton, Richard Walton & George James. 466-41: The Gall Family. Robert and Sarah Gall came to Phillip Island about 1869 and selected Block 10, some 20 acres. They built their home and sunk a well which still exists in Settlement Road, Cowes. Their Plaque and the Walton Plaque were donated by the Phillip Island & District Historical Society.

The Album was compiled by Nancy McHaffie late 1990's, with the assistance of Edith Jeffery's, with her book "Garden of Memories" and extensive knowledge of Phillip Island. The Cemetery lies back from the road and is surrounded by Manna Gums, rare Peppermint Gums, Blackwoods and other native trees. In all 25 acres of land were set aside as Crown Land in the land settlement of 1868. There are 6.2 acres of wetlands near the cemetery entrance.

Book - One hundred years of history Colour photograph of the Wreck of the Speke at low tide with three adults and one boy standing on the wreck.

One of a collection of photographs donated by Bernie De La Haye. One of a collection of slides taken by Laurie Dixon. (Colour photograph scanned by E Alexander) Hector Goodall's wagon decorated by his cartoon drawings.

Hector Goodall was a brilliant cartoonist and now lives in Queensland.

Black & White Photograph of Brass Plaque, commemorating the Opening of the first bridge by Hon. A. a. Dunstan MLA on November 29, 1940. Donated by Jill Walton from her husband's collection.

Photographs of house on Churchill Island

Sepia postcard of the Isle of Wight Hotel Cowes.

One of a collection of photographs donated by Shirley Peterson. Black & White photo copy of original. 18 girls of varying ages between 8 and 18.

The Australian Air League was formed in 1934, in an era when Australian Aviators such as Sir Charles Kingsford-Smith, Charles Ulm, Bert Hinkler, Sir Ross and Keith Smith and others were household names and heroes. The first Squadron was opened in Manly (NSW) and the Air League quickly spread throughout that state. In early 1939 the first Squadron was opened in Victoria and in 1944 the first Girls Section was formed. Today the Australian Air League is active in NSW, the ACT, Victoria, Queensland, South Australia and is still expanding

Article on need for a bridge to connect Phillip Island with the Mainland.

One of 8 photographs donated by Joseph White

Chicory being raked into elevator for drying floor.

This photograph was taken by The Herald & Weekly Times and donated to Audrey McFee. chicory was first grown on Phillip island in 1870. It was used in coffee essence and for medicinal purposes.

Photograph of sea crashing onto rocks at Cape Woolamai

One of a collection of photos donated by Mr J. W. Gliddon Photograph of the original "Continental" Hotel nearing completion about 1929