Churchill Island Heritage Farm covers 57 hectares and boasts a historic working farm with ‘hands on’ farming demonstrations reminiscent of a bygone era. Sheep shearing, cow milking and working dog demonstrations run every day except Christmas day and are included in the entry fee. Carriage rides operate during school holidays and special events. Churchill Island is easily accessible by an all-vehicle bridge from Phillip Island.First walked by Bunurong/Boonwurrung Aboriginal people, the island has an important place in the history of European settlement in Victoria. There are also restored historic buildings from the 1860s and 1870s, lovely gardens, ancient Moonah trees, wetlands, a visitor’s centre and a licensed café.

The Island forms part of the Churchill Island Marine National park and the waters and mudflats surrounding Churchill Island are listed under the Convention on Wetlands of International Importance. Two island circuit tracks offers magnificent views across Western Port Bay and provide excellent bird viewing (Royal Spoonbills, Pied Oyster Catchers, ibis, gulls, herons and pelicans). There are also views of Tortoise Head and French Island. The whole island is heritage listed with Heritage Victoria and the buildings are classified by the National Trust.

This collection forms the basis for the operations of Churchill Island Heritage Farm, which is located on Churchill Island, where in 1801, during a survey of Western Port Bay, Lieutenant James Grant built a cottage, cleared land and planted the first wheat and corn crops grown in Victoria, using seeds provided by John Churchill. The working farm features a homestead, built by Samuel Amess, a one-time mayor of Melbourne who purchased the island in 1872, together with cottages built by John Rogers in the 1860s and associated outbuildings. As well as the heritage buildings, the collection includes agricultural machinery, implements, and tools, special collections of farm engines and dairy equipment, and historical photographs. The collection is managed by Churchill Island Heritage Farm curator.

This collection documents early Victorian rural life and agriculture, and the history of the site where crops were first grown in Victoria in 1801; includes also information on the various owners of the island and Government ownership from 1970s.

"To whom it may concern:- my apologies for this jumble. It is just as it was left to me and i have no knowledge as to whether there is anything of interest or not. Please do as you see fit with it. U Bright."

1) "The effects of my Great Grandmother Janet Amess, wife of Samuel Amess. Dated back to 1850s-60s. Unity Bright." 2) "To whom it may concern. My apologies for the creasing, discoloration and markings but they have inevitably come with age and I hope that someone with the skills to rectify the conditions somewhat can improve them. Thank you very much. U Bright" 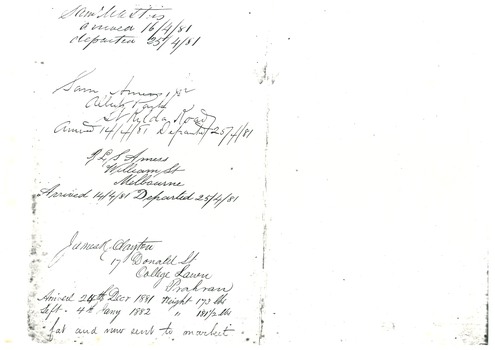 Photocopy of 92 page document of the 1881 - 1902 Churchill Island Visitors' book containing handwritten entries from people who stayed at the Island during the time of Samuel Amess and his son (also named Samuel). Photocopies are housed in a red folder.

Churchill Island Heritage Farm has a long and interesting history. From 1872, Samuel Amess was the primary owner of Churchill Island, having purchased it from the Rogers family. During his time on the Island, he built the main house and developed the surrounding land and gardens significantly as a holiday house away from the pollution of Melbourne. This photocopy of the original visitor's book (whose location is unknown) provides a valuable insight into the visitors who were regularly hosted at Churchill Island by the Amess family.