A group of volunteers under the auspices of Parks Victoria, caring for our environment and promoting greater public awareness of the cultural heritage of Kurth Kiln and its significance in Australian history

The Caretaker's Residence and kiln premises are open to the public by appointment only, so if you or your group are interested in learning more about this historical site, please contact Alfred and Ursula who will arrange to open the facilities and tell you more about it. Heavy Duty Rope Pulley with a Ring Connection at the Top. Rectangular Wooden Box made from 3plywood with reinforced corners and wire banding. Open at the top 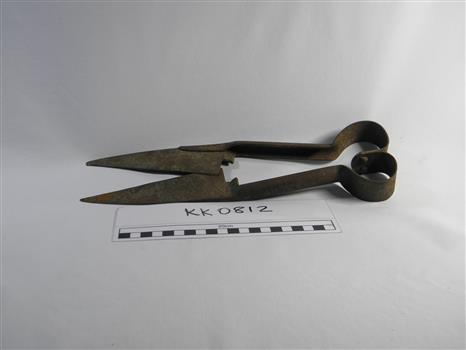 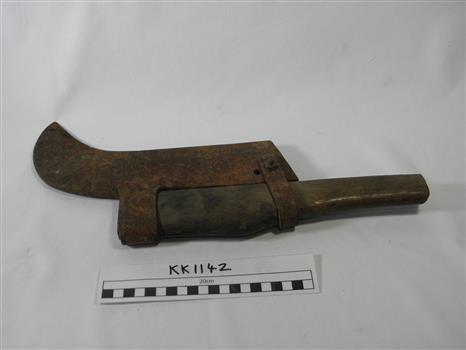 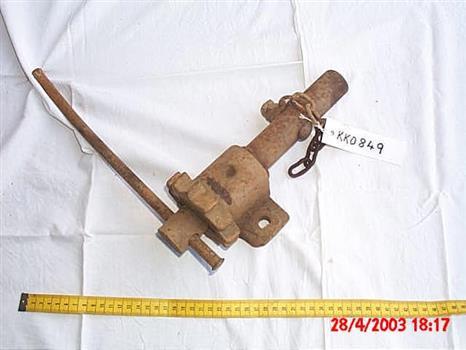 Ratchet Assembly on a flat surface cast bearing; one side broken off. 10cm dia ratchet wheel held in position by a locating pin. Captive handle 1.2cm round steel 35cm long. A 15cm piece of chain is attached to the shaft. Formed Steel Rake or Scraper, a half-round steel plate rivetted to a short shaped steel arm. Rounded side of steel plate is ground to an edge

perhaps used to rake out chacoal from kiln 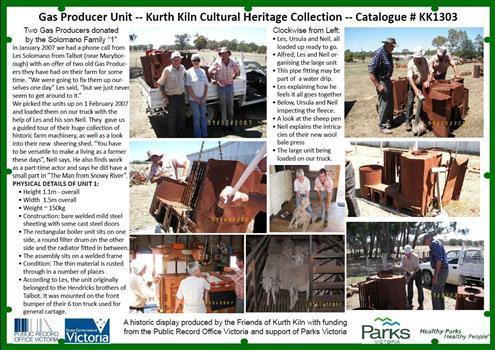 This Gas Producer unit appears to be home-made mild steel construction for a specific purpose. The assembly sits on a welded frame, the hopoper on one side, the filter drum on the other and the radiator in between.

According to Les Solomano this unitoriginally belonged to the Hendricks brothers of Talbot. It was mounted on the front bumper of their 6 ton truck used for general cartage.

The Unit shows the wide range of Gas Producers constructed during the war years to drive with charcoal fuel.

there are no specific markings visible found a Kurth Kiln amongst the charcoal making equipment This Gas Producer unit is obviously a home made construction for a specific application. Absence of any air-cooling facilities suggests these may have been fitted separately inside the engine compartment.

Les Solomano tells us this unit was made by their cousin Frank Solomano and mounted on the passenger side running board of his A Model Ford, Spare bads of charcoal were tied to the rear door, so passengers had to get in and out through the driver side doors.

It is the smallest Gas Producer unit we have seen A commercially made cast iron unit with a solid round hopper/boiler on a steelframe base. It has a pressure-cooker lid and a car type radiator. Solid built, but rust affected in parts

In conversation with Mr Tibbett we found out that he obtained this particular unit at an auction in Sydney and brought it home with the intention of one day getting it going again. 'One day' never seemed to come, so he decided to let us have it for our display, rather than jjust collecting dust in his shed.

This unit is again of a different manufacturer and construction, highlighting the versatile nature of charcoal producer gas and its applications. A cylinder of wood fitted on a 1" waterpipe, secured by an elbow and a 1" locknut. A 10cl long piece of pipe is fitted on the other side of the elbow. The assembly could be part of the kiln water-cooling system This Gas Producer Unit is in reasonable condition, with apparently all doors and fittings intact. The central oval shaped hopper is flanged by round and regular containers, interconnected with a series of pipes. Obviously a professionally made item, with signs of the original paintwork still visible.

This Unit was donated to us by the Falla Family of Donald, and picked up from the farm on 22 February 2007.

The unit being in reasonable condition would almost lend itself to reconditioning for use.

A brass nameplate states the make as Electrolux Steel Coil Tension Spring 26cm long. 5cm diameter made with 6mm dia round steel. Around loop at each end in the same plane provides for hooking onto equipment Flat Belt Pulley, with 5cm bore, key slot and locating screw. 4 spokes to wheel, 1cm hole in rim of pulley and balancing weight inside of rim Chisel shaped tool for a machine with a 3.5cm hole at one end. 3cm thick and 6cm wide at the thick end. Could be part of a slasher or hammermill

found amongst the tools at Kurth Kiln Dates to the charcoal making period in the 1940s A 10cm round cylinder of wood on a 1.2cm round steel shaft, shaped into a 15 x 15cm crank handle. Both ends of the wood are banded with 2.5cm flat steel, fastened with bullet head nails Heavy Duty Rake, with attachment to 2.5cm waterpipe fitting. 8 steel prongs are fitted with a flat steel scraper (50 x 8cm x 3mm) at the end, held in place with two steel clamps and two hex bolts and nut each Part of Tools used for making charcoal during WWII A Gas Producer Unit that converted charcoal into a gas suitable for the combustion engine. Used on motor vehicles during WWII petrol rationing restrictions. It consists of a hopper to hold the charcoal and a firebox to generate the gas

The Unit was picked up from a paddock on a farm in Bagshot, near Bendigo. It was donated to the Friends of Kurth Kiln Heritage Collection by the Family of Cyril H Peatling on 23 December 2006.

Gas Producer Units are of significance to Kurth Kiln because they demonstrate the enduse of the charcoal that was created at Kurth Kiln. Considerable documentation has been made available to us on its history, including a picture of the truck is was mounted on.