The Glen Waverley Sub-Branch of the Returned Servicemen’s League, Victoria was formed on the 9th September 1950, when 25 Returned Servicemen met at the Mechanic’s Institute Hall (The Waverley Hall) Springvale Road, Black Flat.
In 1960, our name was changed from Glen Waverley Sub-Branch to the Waverley Sub-Branch, at the time the City of Waverley was created from the Shire of Mulgrave.
In 1963, an adjoining block of land was acquired and the first major expansion of our club rooms took place.
In 1968, Membership by this time, had increased to over 200 ordinary members.Membership now exceeds 4000.
Our collection of memorabilla items include Medals, Military Artifacts, Trench Art, Photographs,Commemorative items and Badges. For further information on any of our item- Click on the email enquiry link on this page.

Visitors - By appointment only during renovation

Our aim is to preserve the heritage of the Men and Women who have served their Country both in peace time and in times of conflict. 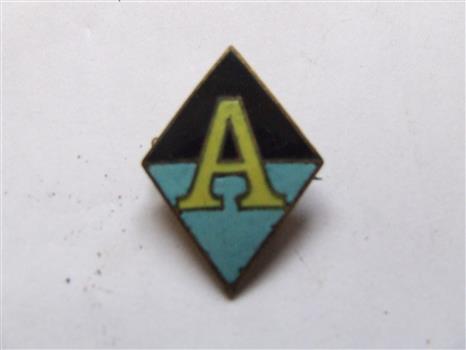 Enamel on brass badge top half of diamond is dark blue and the lower half light blue with a yellow enamel "A" superimposed. Rear has a stamped makers mark

Presented to the members of 25Bn. AIF who served at Gallipoli 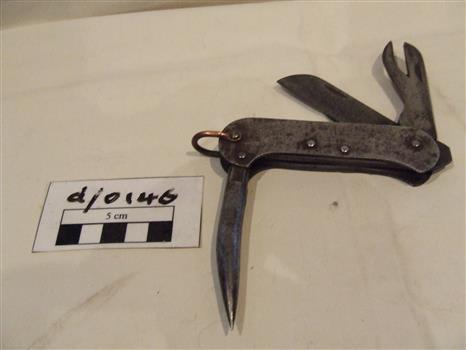 Carried by C. Felstead during WWI Thought to be British Army Issue 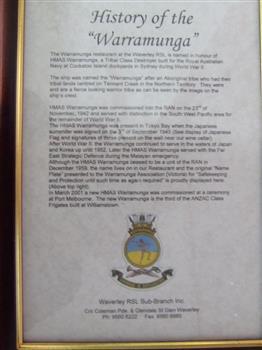 Scroll detailing the service of H.M.A.S. Warramunga from Commissioning November 1942 until it was de-commissioned December 1959 3 letters from Luio Zenere to his father Attillo Zenere after his capture by partisans, handed to American forces and subesquently to British and his incarceration in a P.O.W. camp in Naples 16/3/1944

One letter in english partially readable 2 in Italian faded and difficult to read but letter in English gives insight into the life of one P.O.W. White tankards with a gold band around the top and bottom. Sepia colour prints around circumference,depicting various aspects of war.

RSL badge printed on base WWI,WWII,Korea issued to A Beale a dispatch rider during WWII “Pennies” were awarded to the Next of Kin of soldiers who died in or as a result of the “Great War” and approximately 1.5million were issued up until the 1930’s they were accompanied by a scroll (letter) from King George with the message “‘I join with my grateful people in sending you this memorial of a brave life given for others in the Great War”. The Name of the serviceman, which appears on the medallion' is always shown without rank. This is to show that the sacrifice of all men is of equal value.

Stanley Alan Morey was born in Dulwich, London, England from whence he came to Austalia and lived with his parents and elder sister in Brighton Victoria He became a fitter and turner. He enlisted in the A.I.F on the 21th April 1917 Service number 3444 and was assigned to the 59th Battalion and embarked from Sydney on the HMAT “Port Melbourne” on the 16th July 1917 He went to France from England on the 9th January 1918 and joined his unit 18th January 1918 at Le Havre Less than 3 months later he was Killed in Action. He has no known grave but is remembered by a Memorial at Villers-Bretonneux, France

Depicts British rule of the sea (Britannia with two Dolphins), and a lion representing the British Empire. The lion stands on an eagle which represents the defeated Germany. A small insert has the Soldiers name embossed within a rectangular border. Around the rim of the plaque appear the words "He died for freedom and honour" 9 mounted photos of Weary Dunlop and his funeral Ctrcular wlth a iiiseO rim and another rim 1mm inside the first containing 60, equidistant raised dots. The bottom half of the medal contains two crossed rifle bullets 18mm long above which is a 15mm diameter polar projection map with Korea, encircled by two olive branches. itlain except for the inscription in 3mm Korean characters ' ' (Korea) around the lower: half of the medal and ' ' (War Service Medal) from top centre to bottom.Nato Korea Bronze Medal with blue white red and yellow ribbon The intrenching tool of the Australian soldier was a British design. It is carried in an Australian leather infantry equipment blade carrier, commonly known as P15 equipment The Australian version was made of two pieces, riveted together with three rivets. The depth of the handle (helve) collar is considerably thicker than the accepted British pattern of the same time. http://www.grantsmilitaria.com/ Probably issued to the Mother of Henry Claude Roussac 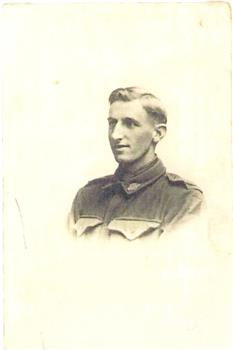 3 Black and white photographs from WWI

Fredrick Charles Dix enlisted 8th July 1915 at Castlemaine (at the time he was living with his Mother and stepfather in Fryers Town) after serving in the Senior Cadets. He was taken on by the 9th Light horse and sent to Egypt for further training. Unit embarked from Adelaide, South Australia, on board HMAT A30 Borda on 11 January 1916.He served in France and was wounded by shrapnel in the eye socket but eventually returned to active duty on the front.He returned to Australia 6 September 1919

Sgt. F. C. Dix 1790 9th light horse 13th reinforcement 13 Field Artillery Brigade where he (several times) attained the rank of Sergeant. He also served during WWII at Nowra as a driver. Photos of Fred. were taken after enlistment, and the photo of ? 13 F.A.B. is thought to have been taken in Egypt 1916 News of end of War in Europe

Unconditional surrender by Germans to all allies. War Ends in Europe This regiment 2/3 Anti-tank later was known as the 2/3 Tank Attack Regiment. The colors are sometimes shown as the reverse of the above.http://www.awm.gov.au/collection/records/awmohww2/army/vol1/awmohww2-army-vol1-app4.pdf The "T" shape of the colour patch denotes the Regiment served at Tobruk 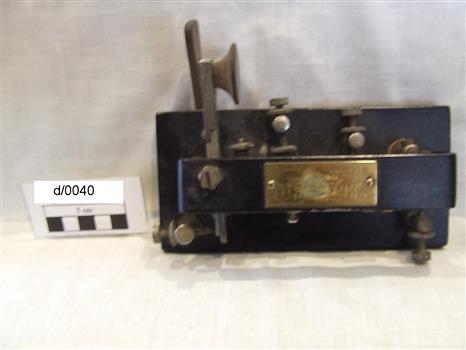 "I bought thie unit in Melbourne in 1944 while training at Point Cook RAAF Signal school as a wireless telegraphist. With my posting to 55OBU (operational base unit) at Birdum and Gorric Wireless telegraphy Stations broadcasting weather forecasts in morse code for the south west Pacific area, it was used continually, sending over a million and a half weather forecast groups over 15 months. It ended it's career with Aeradio service at Alice Springs airport, (57 QBU), when I was discharged in April 1946." William Robert Moffatt (ex RAAF 147459, Corporal, Wireless Telegraphist.

The SUPER AUTO No.4634 Manufactured by Leo G Cohen Melbourne De Havilland made DH 5220 original fitment. The de Havilland DH 82 Tiger Moth is a 1930s biplane designed by Geoffrey de Havilland and was operated by the Royal Air Force (RAF) and others as a primary trainer. The Tiger Moth remained in service with the RAF until replaced by the de Havilland Chipmunk in 1952 http://en.wikipedia.org/wiki/De_Havilland_Tiger_Moth Tags were used to identify wounded or deceased soldiers. All soldiers were issued two tags: one to stay with the body and the other to go to the person in charge of the burial for record-keeping purposes