Reverend William Henderson opened Ballarat College on Wednesday 6 July 1864 when two seven-year-old cousins presented themselves at his church, St Andrew's Presbyterian. On the following Monday morning they were joined by three other boys to become the first students of the school.

Elizabeth Kennedy, the wife of another Presbyterian minister, came to Ballarat to live and in 1876 she began a cottage school for her children and the daughters of family friends. This was the beginning of what became known as Mrs Kennedy's School for Girls, later to become Clarendon Presbyterian Ladies College.

The school history has been documented in two publications by Phil Roberts on 2004 and 2014 respectively - Golden heritage: history of ballarat and Clarendon 1864 - 2004 and a companion volume Ballarat Clarendon College: One hundred and fifty years. These books are available for sale from the school.

The collection documents the history and development of the school for present and future generations. It comprises both school records and museum items.

Hi, I have received my great grandfather's (Robert Cameron) medal (9ct gold) for wining the 2nd Ballarat College Old Collegian Cup in 1891. Could you tell me more about the race/cup? Kind Regards Greg McLean

Hi Greg, thank you for your enquiry. Athletic Sports carnivals were held annually at Ballarat College, often at the same time as old collegians annual reunions and always with some races exclusively for 'old boys'. From 1884 College Cups were donated by the Old Collegians Association for the outstanding athlete amongst present boys and past boys. Handicap races were run over 120, 250 and 440 yards to obtain the results. In the first year Thomas Thompson won the old boys cup. Robert Cameron entered Ballarat College in 1885. We cannot confirm his year of leaving but going by his age (Birth: 13.10.1871) we expect he would have left before 1891 so that would put him in the old boys category. Our school archive holds examples of Old Collegians Cups from this era. They were extremely ornate as you will see from examples catalogued to Victorian Collections. However we do not hold personal medals relating to the cups themselves. If you were able to forward a photograph of the medal's inscriptions I would be most grateful.

Example of the various ways old collegians continued to contribute to the school with generosity throughout their adult lives.

Book plates inside front cover: Ballarat College Library / PRESENTED BY / Graeme Dowling Esq 1939 / Books may be kept for one week only, but may be renewed / PLEASE REPORT ANY LOOSE LEAVES, ETC

Book - Freedom's sword: a tale of the days of Wallace & Bruce

This prize was awarded to Clara May McKay who entered Clarendon Ladies College in 1894.

Book - When we were girls together Book was awarded to Stephen John Holgate in 1891 for first prize in bookkeeping. Stephen (D.O.B. 09/07/1877) entered the college on 27/01/1890. The original registry notes parent as Stephen Holgate from Miners Rest and Stephen's previously school is noted as 'Home Tuition'. Other family members noted as attending the college are Harold, George, Edward, Robert and Thomas. Archives also hold war memorabilia for Edward and George Holgate.

Presbyterian educators placed great value on a classical education matched with diligence in study. Book prizes were highly regarded and academic success admired. In the school’s early years prizes were ordered direct from London and had the school crest embossed in gold on the front or back cover. Many of the prizes given in early years were returned to the school to equip the Weatherly Library when it opened in 1936. Connection to college war memorabilia and war heroes. James Albert Rintoule entered Ballarat College 1888; son of Robert Rintoule of Nhill and previously educated at Nhill State School to the 5th Form. James was a significant sportsman winning medals for high jump in 1888 and 1891 as well as hurdles in 1891. He continued his sports after leaving the school, winning the 1893 Albion Football Club Best Place Player. James' great nephew and niece James (1962) and Helen (1967) also attended the school.

Such elaborate rewards for athletic events demonstrates the significance of sports in the school's culture at the end of the 19th century.

Unusual photograph of student cohort because students are not wearing formal school uniform but athletics singlets and shorts or cricket whites. Silver coloured metal badge plate slightly concave, in the shape of the Clarendon Ladies College crest with motto and school name on scroll at base of crest

The badge was sewn to the hat band and worn at the front of the hat. Mrs N Trethewie, of Penguin, Tasmania, donated the badge to the school in July 2002.

Some of these chairs remained n general use within the school even after MacFarland Hall was renovated in the early 2000s. Solid wood chancel chair with discreet carving; plaque on front side of back support

Wife of the Rev T D Cairns, Minister of St Andrews Kirk, Mrs Mary Cairns served on the Council of Clarendon Presbyterian Ladies College 1919 - 1949. Her generous guarantee of loans from the Ballarat Banking Company, together with other donations, enabled the Presbytery of Ballarat to purchase Clarendon Ladies College from Mr Kennedy in 1919 for 1500 pounds. Mrs Cairns was an inaugural member of the new Clarendon Presbyterian Ladies College Council, established 1919 and remained on the Council for 30 years. This chair was a personal gift to Mrs Cairns by the PWMU to honour of her long and devoted service to that organisation. Mrs Cairns donated the chair back to St Andrews Kirk where it remained in use until the sale of the property in 2019. Congregation member, Max Harris, kindly arranged the donation of the chair to the school because of Mrs Cairn's long association with Clarendon PLC.

Plaque: This chair was presented by the / Members of the St Andrews P W M U / on the occasion of the retirement of / Mrs T R Cairns / from the Presidency of the Branch / after holding that office for more than fifty years / as an acknowledgement of her devoted service / as President / & of their deep personal regard. This book was awarded to Amy Evelyn Bailey for second prize in Geography in the fourth form. Amy entered Ballarat College in January of 1885 at the age of 12. Parent/Guardian named in Registry as Ed Bailey residing in [Mt. Rowan?]. It is also noted in the Register that Amy came from Miss. [Keeps?] Ladies' School.

During 1877 - 1891 Ballarat College accepted enrolments from female students. The school holds the original register of this period and notes that Amy Bailey entered the College at the age of 12. Presbyterian educators placed great value on a classical education matched with diligence in study. Book prizes were highly regarded and academic success admired. In the school’s early years prizes were ordered direct from London and had the school crest embossed in gold on the front or back cover. Many of the prizes given in early years were returned to the school to equip the Weatherly Library when it opened in 1936. Silver coloured maltese cross medal with decorative link attached to top and engraved on both sides. The medal was awarded to Trooper Whyte of the Prince of Wales Victorian Volunteer Light Horse (Ballarat) in 1877. Gold-plated badge in the shape of the school crest; blue scrolls below shield have silver lettering; shield features star, open book and motto; burning lamp on top of shield; pin fastening fixed across reverse of badge

School badge for Clarendon Presbyterian Ladies College 1921 - 1973, donated to the school by Michael Dunn. Michael's mother and aunt (unidentified) both attended CPLC in the 1930s. The badge worn worn as a tie-pin or fixed to the entre of the tunic bodice. It is possible the gold badge was for senior students or prefects only and the silver badge for other students. Major General Howard Edward Elliott, Dux of School 1897, had an illustrious career in the army and in politics. He served on the Ballarat College Council 1926-31. The school has a house named in his honour. Inscribed on football held by student in middle of front row: Premiers 1896

Example of the various ways old collegians continued to contribute to the school with generosity throughout their adult lives. This book was awarded as the "Howard" prize to Robert A. Mitchell for Arithmetic in 1879. Robert Mitchell, (D.O.B 9/2/1862), entered the College on 9th July, 1878. Robert is the son of Robert Mitchell who resided at Teragram Cottage, St. Arnaud. Enclosed in the pages of the book was a small purple cardboard invitation which reads: "Ballarat College. Annual Distribution of Prizes. Academy of Music, Tuesday, December 16, at four o'clock p.m. The Reverend WM. Henderson in the chair." This invitation has subsequently been filed in the 1879 file. 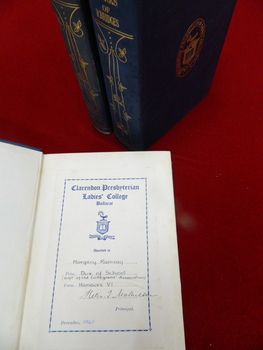 Book - The poetical works of Keats, R. Bridges and Shelley Prize awarded to Raymond Percival Thomas Oxlade, Dux of Fifth A (Upper) 1934. Raymond entered Ballarat College 1932. Raymond was born 24 June 1917 at Ballarat, the son of Percy Alfred and Ruby Evelyn (Davies) Oxlade. He enlisted in the Australian Armed Forces in 1940. He transferred to the RAAF in 1942 and was discharged 1946. Raymond's grand-daughter Jessica Oxlade entered the school in 2007, achieving Dux of the school in 2010. A leather bound book with Ballarat College crest and borders embossed in gold on front cover. Page edges have gold-leaf. There is a bookplate fixed to inside front cover. Binding has been re-inforced with tape inside front and back covers.

This beautifully bound book was awarded to A. Tunbridge in 1884 for his prowess in French studies during the fifth form. At some stage the book has been donated to Mentone Girls High School and added to their library collection before being donted to Ballarat Clarendon College. Lapel badge given to all Tear 12 students at start of year. Instituted late 1990s.

Sterling silver cross oars to be sewn to rower's cap. Each or is engraved: 'Hutton & Co'

These sterling silver cross oars were sewn to the rowing cap. Fred Raynor Langsford rowed for College during 1916-1918.

Engraved on each oar; 'HUTTON & CO'

The War Memorial Appeal Committee of the Ballarat College Old Collegians' Association scheme for a memorial to Old Boys who gave their lives in the service of their country during the Second World War. The appeal was launched in 1946 and the extensions opened in 1953.

Significant evidence of old collegian commitment to the memory of their peers and to the development of the school.

Mein's history of Ballarat College, published 1964, records the school's first enrolments this way. "The Ballarat College will be opened on Wednesday morning, 6th July, 1864, at 9 o'clock, in the Rev. Wm. Henderson's Church. Intending students will assemble at that hour" Advertisement in the Ballarat Star. 'Two seven year old boys 'assembled'. They were cousins, and their names were: Samuel Baird and James Brown. On the following Monday....came three more pupils: Charles J Henderson, James W Nicol and William Govan Finlayson. framed item collated after their deaths, possibly for centenary celebrations. Locket-style medal with chain ring at top, gold on silver shield with ornate wreath around sides and bottom. 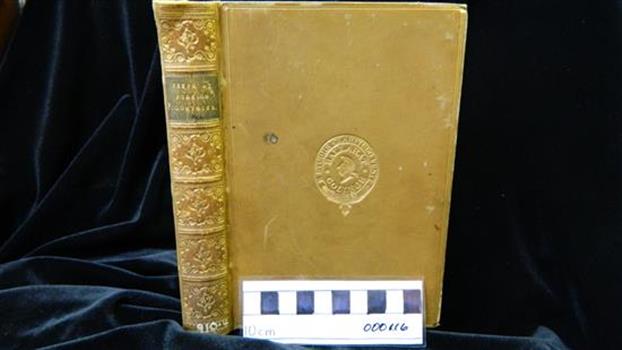 Prize awarded for good conduct and general proficiency to Newton Wanliss and represented Ballarat College for their library collection in 1941.

Social significance due to generosity of old collegians in continuing support of the school and its resources throughout adult life. Ballarat Clarendon College Annual Report 1990: Silver inkstand donated as a perpetual trophy for the most improved swimmer at College; donated by Mrs Doss Mooney (CPLC 1936) in memory of her father J W Clegg. Donated by A R Kyle (1916) in 1994; does not appear to have been attached to blazer. Roy Kyle entered Ballarat College in 1912. He marched with Pompey Elliott's 15th in WW1. (see in the footsteps of Pompey p. 173-4. Roy was awarded the College Cup a prestigious sporting trophy in 1912. (see VC000054) The College Cup was awarded to the competitor who won all three 120, 250 and 440 yard races. For more information about the College Cup see Ring-A-Roo December 1993. In 1996 Roy was the oldest 'Old Collegian and youngest surviving Gallipoli veteran. Roy passed away 9th October 1996.